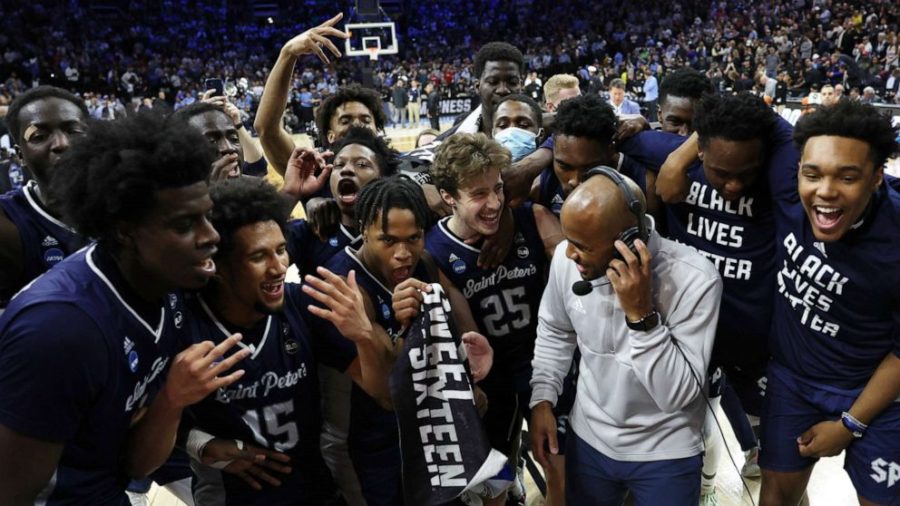 The fifteenth seeded Saint Peter’s Peacocks celebrating their Sweet Sixteen win over the Purdue Boilermakers to be the first fifteenth seed in March Madness history to advance to the Elite 8 to play the North Carolina Tar Heels.

The Saints Peter’s Peacocks entered March Madness as the fifteenth seed in the East. The Peacocks finished the season second in the Metro Atlantic conference with an overall record of 22-12, only behind the Iona Gaels (25-8).

While Saint Peter’s made the NCAA tournament, Iona however, did not due to them going one and done in the MAAC tournament, as were upset by the in-conference ninth seeded Rider Broncs. This resulted in Iona playing in the NIT tournament.

Saint Peter’s won all three of their MAAC tournament games to punch their ticket to March Madness and would the second seeded Kentucky Wildcats in the first round.

First Round: Right at tip off, the Peacocks came ready to play, and after a full half of basketball, they were all tied up with the Wildcats at thirty-seven points each respectively. This already being a shock to March Madness viewers, but most would believe Kentucky would get their heads out of the dirt and pull away from the Peacocks. That, however, was not the case. Saint Peter’s continued to match Kentucky’s level of play in the second half of the game. Both teams matched each other’s point totals again and the shockingly intense game went into overtime at a score of 71 a piece. Saint Peter’s dominated OT, scoring fourteen, almost doubling the amount of points Kentucky scored in OT (8). Saints Peter’s guard, Doug Edert, the man with the mustache, made the final shot form the free throw line to bring the final score to 85-79 as the Peacocks pull off a historic upset sending the Wildcats home early. Sophomore guard Daryl Banks III put up a great game on twenty-seven points. Sophomore guard Doug Edert, the mustache, had twenty points as well.

Second Round: Saint Peter’s round two actually came easier than their first. But it was still no game to take lightly by any means. Their next battle was against the seventh seeded Murray State Racers. While the game stayed relatively close, the Peacocks had control over the majority of the game. They finished the first half up 32-27. The Peacocks continued to hold the upper hand as they outscored the Racers 38-33 in the final half, winning a nice 70-60 game, sending Saint Peter’s to the Sweet Sixteen. It was a four-point game, 64-60, with a minute left, until Saint Peter’s scored six unanswered points to clutch up and eliminate Murray State. Junior forward, KC Ndefo led the Peacocks in points with seventeen.

Sweet Sixteen: The Peacocks have made it to the Sweet Sixteen! Their task this time much improved from Murray State. They faced the third seeded Purdue Boilermakers. After not trailing after their first two first halfs in March Madness, the Peacocks trailed the Boilermakers 29-33. But Saint Peter’s could not let their Cinderella story die as they came back blazing, and did just enough to edge out Purdue in yet another insane upset by the Peacocks. They put up 38 points the second time around, taking out Purdue 67-64. Edert drained the last two shots from the free throw line with four seconds left. Not one Saint Peter’s player stood out this game. Each player contributed, and it took even more team effort this time around to take out the top Purdue team.

Elite Eight: For the first time ever, a fifteenth-seeded team has made the Elite 8! The Peacocks look to continue their Cinderella story, but the North Carolina Tar Heels stand in their way. They were an eighth seed, but they made it this far for a reason, and there was no reason to underestimate them, and the same goes for Saint Peters. The first half did not go very smoothly for the Peacocks this time as the Tar Heels defense held them to under twenty points, and their offense put up 38. Saint Peter’s offense picked it up in the second half, putting up 30 points but the defense could not slow down the Tar Heels who put up 31, beating Saint Peter’s by twenty points, 69-49. In the loss, no one stood out on the Peacocks. However, for the Tar Heels, players like forwards Brady Manek and Armando Bacot balled out to end Saint Peter’s magical run, and they would continue their own.

While it was heartbreaking to see the Saint Peter’s Peacocks Cinderella story come to an end, it was a heck of a run for them. None of the players on their were ranked coming out of high school, and for them not to just make it into March Madness, but to make a run into the Elite 8, is truly inspiring. Doug Edert, emerged as the main star standout on the little known team, and outside of his elite level play, became famous for his mustache. He was also welcomed with endorsements. But the player swere not the only people to benefit from this run. Peacocks’ now former head coach, Shaheen Holloway, has been hired by his old college, Seton Hall, to coach their men’s basketball team.