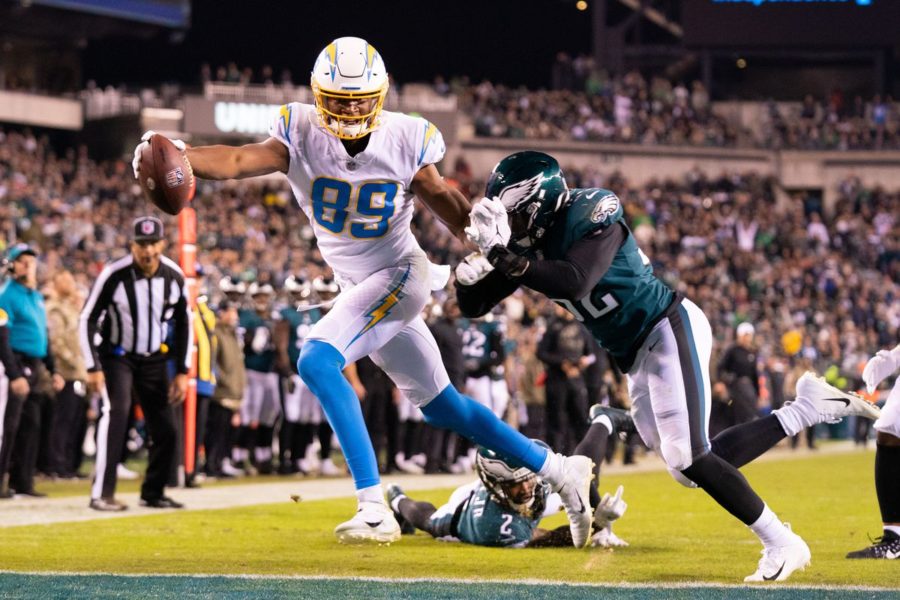 Chargers’ tight end Donald Parham powers past Eagles’ cornerback Darius Slay Jr, to score a touchdown in a 27-24 Chargers victory over the Eagles.

A hard fought battle by the Eagles falls short in the final seconds of their Week 9 game against the Los Angeles Chargers.

The Chargers, who were looking like a top team in the league, had been struggling the last couple weeks, losing their last two games against the Ravens and the Patriots. They also feature one of the worst run defenses in the National Football League as Lamar Jackson and Damien Harris were able to run all over them.

Quarter 1: On a third & five play, Hurts tries to drop the ball in for Dallas Goedert, but it’s just slightly overthrown. The Chargers charge right down the field, but stall once they near the endzone, and fail to get in, even on their attempt on fourth & goal. With the Eagles getting the turnover on downs, they fail to make any progress, and Hurts barely avoids the sack for a safety on third down. With better starting field position due to the Eagles having to punt from their own endzone, tight end Jared Cook catches a pass from Justin Herbert, and powers down to about the one-yard line. Herbert then shortly after connects with receiver Steven Anderson for the touchdown. 7-0 LAC.

Quarter 2: On a play fake, Hurts hits Devonta Smith who gets inside the twenty. On third & goal, running back Jordan Howard, slides through the lines, and gets the touchdown. 7-7. Los Angeles opts to go for it again on fourth down, and pitch to running back Joshua Kelley who is stopped and tackled short on the line-to-gain. Eagles’ offense takes over on downs again. Philly runs the ball down LA’s throats in the most likely final drive of the half, and after stalling in the redzone, kick a twenty-four yard field goal to take the lead before half. 10-7 PHI.

Quarter 3: Herbert connects with Keenan Allen across the fifty, as he almost breaks loose. Hebert throws a floater to tight end Donald Parham in double coverage, and he makes the athletic catch along the sideline. Eagles’ D holds again, and Dustin Hopkins kicks a thirty-yard field goal to tie the game at ten points apiece. Tripping over his own lineman’s feet, Hurts fails to escape the pocket and goes down. Herbert heaves a pass deep, and Mike Williams makes the catch in good coverage deep into Philly territory. Herbert throws a quick pass to Parham, who tosses Darius Slay aside, and gets into the endzone. Hopkins misses the extra point. 16-10 LAC. The Hurts to Smith connects shows as it picks up a couple good chucks of yardage. Kenny Gainwell walks into the endzone for the score. 17-16 PHI.

Quarter 4: Herbert hits Allen for a big gain to about the Eagles’ thirty. He then opts to take the ball himself, and runs for the touchdown. Going for the two-point conversion now, Herbert fires a pass to Cook. 24-17 LAC. Hurts goes airborne on third down and moves-the-sticks. He then throws a pass that is snagged by Smith, and he reaches into the endzone for the TD. 24-24. Allen gets blasted on a third down play, but luckily Austin Ekeler is able to successfully pick up the first down on a fourth down attempt. In another fourth & short situation, Herbert QB sneaks for the first down. Ekeler breaks through the lines, and sets his team up for the game winning field goal with five seconds left. Hopkins makes the twenty-nine yarder and the Chargers win 27-24 over the Eagles.

Despite it being a little too close for comfort, the Chargers break their losing streak.

Next week, the Chargers play the Vikings who are a good team held back by their head coach.

For Philadelphia, Jalen Hurts had a lighter load again as he only attempted seventeen passes, completing eleven of them for 162 yards and one TD. With Sanders still on IR, Jordan Howard led in rushing yards with seventy-one. Devonta Smith had a good day with 116 receiving yards and scoring his first TD since Week one.

The Eagles fall to 3-6 as they travel to Mile High to face the Denver Broncos, who are on a two game winning streak, most recently upsetting the Cowboys. Philly is the only team standing in the Broncos way of sweeping the NFC East. If the run game can be effective like it has been for the Eagles the last couple weeks, they may just be able to hold off Teddy B’s team.