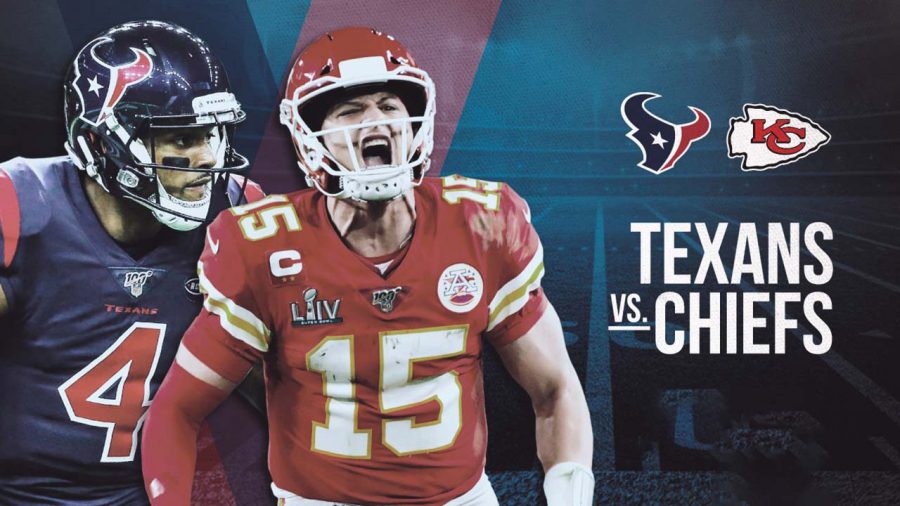 Thursday Night Football featured the Houston Texans taking on the raining Super Bowl champion Kansas City Chiefs, featuring two of the league’s best quarterbacks in Patrick Mahomes and Deshaun Watson. Ironically, the last game the Texans played last season was against the Chiefs in the divisional round, where they blew a 24-0 lead and lost 51- 31. Houston would now be given a chance to redeem themselves. Now before we get into the game recap, it is worth noting that the Chiefs are one of few teams allowing fans into their stadium as of now, with 22% of the max amount people were allowed in. Even more worth mentioning was that the Texans decided to stay in the locker room during the National Anthem to also listen to “Lift Ev’ry Voice and Sing.” After Houston ran out onto the field, both teams stood for a moment of silence. Getting back to football now, this hyped up game unfortunately did not live up to the hype as the Chiefs had control most of the game and won 34-20.

1st Quarter: Both teams failed to score on their opening drives, though the Chiefs were close with Demarcus Robinson barely failing to secure a deep ball pass from Mahomes. Jacob Martin broke through the Chiefs o-line and got the first sack of the season on Mahomes. Finally Watson handed the ball off to David Johnson, who the Texans acquired through a trade that sent their star receiver, DeAndre Hopkins, to the Cardinals, who ran into the endzone scoring the first touchdown of the 2020 season. The Texans shut out the Chiefs in quarter 1 7-0.

2nd Quarter: Almost immediately after the second quarter started, Mahomes connected with star tight end, Travis Kelce, for the Chiefs first touchdown of the season. Tied game 7-7. The Chiefs then get their first sack as Chris Jones breaks through Houston’s o-line and sacks Watson. The Chiefs get the ball back, drive down the field again, and Mahomes tosses the ball to Sammy Watkins for the score. Kansas City takes the lead 14-7. As Watson continues to run for his life, the Texans make it to the Chiefs side of the field, and decided to attempt a 51-yard field goal which kicker, Ka’imi Fairbairn, hooked right and missed. The Chiefs took this opportunity to get kicker, Harrison Butker, into field goal range, and kick a 29-yard field goal to end the 1st half. Chiefs up 17-7.

3rd Quarter: Kansas City scores their third touchdown of the night when rookie running back, Clyde Edwards-Helaire, making his NFL debut, breaks away and runs into the endzone, scoring his first touchdown. Chiefs lead 24-7. Watson gets pressured by Frank Clark and scrambles for a few yards. His o-line has not been doing so well.

4th Quarter: Watson is under pressure once again, and is hit by Tyrann Mathieu as he throws, and the ball falls right into the hands of rookie cornerback, L’Jarius Sneed, who returns it for some good yardage. With the Chiefs already in the redzone after that interception by Sneed, Mahomes targets Byron Pringle, but linebacker Benardrick McKinney jumps up and grabs the ball first. Luckily for the Chiefs, there was a penalty called on Bradley Roby for pass interference before the interception. Mahomes gets the ball back, and surprise surprise, he throws a touchdown to Tyreek Hill. Kansas City expands their lead to 31-7. With only a chance to earn some garbage time points, Watson leads the Texans down the field and Jordan Akins catches a pass for a touchdown, and with a failed 2-point conversion attempt, the Texans trail 13-31. Houston is able to stop the Chiefs and Watson connects with Will Fuller for a nice gain. Soon after, Watson fakes a hand off and runs into the endzone. The score now 31-20 Chiefs. A failed onside kick by Houston, sets the Chiefs up at about the Texans 2o yard line. Edwards-Helaire breaks a few tackles but is unable to reach the endzone, and the Chiefs settle for a 19-yard field goal, winning them the game 34-20.

With a dominate performance as usual by Kansas City, they start off the year 1-0. On the other hand, the Texans struggled in many ways, and fall to 0-1. Both teams lead running back made some heads turn as rookie Edwards-Helaire rushed for 138 yards and a touchdown, and David Johnson rushed for 77 yards and a touchdown. Mahomes threw for 211 yards and three touchdowns, already starting the year off well. Watkins led the team in receiving yards with 82. Him, Kelce, and Hill each had a touchdown. Frank Clark was very good as well as he put pressure on Watson all game and had one sack. Chris Jones finished with 1.5 sacks and Dorian O’Daniel had one too. Needless to say, the Chiefs look like they now have a good run game, and their secondary has improved as well. For the Texans, Watson finished with 253 passing yards and a 1:1 touchdown to interception ratio. Fuller had a nice game with 112 receiving yards and Martin was the only defensive player to make a big play for Houston. Even J.J. Watt was pretty quiet. All in all, the Texans o-line was atrocious with Watson scrambling the whole game, they couldn’t stop the run much less the pass either, and were unable to get much going in the receiving game without Hopkins. Even with a fogged up face shield, Chiefs head coach, Andy Reid, still proved to be a much better head coach than the Texans head coach Bill O’Brien, as Kansas City begins their quest to get repeat victories in the Super Bowl.