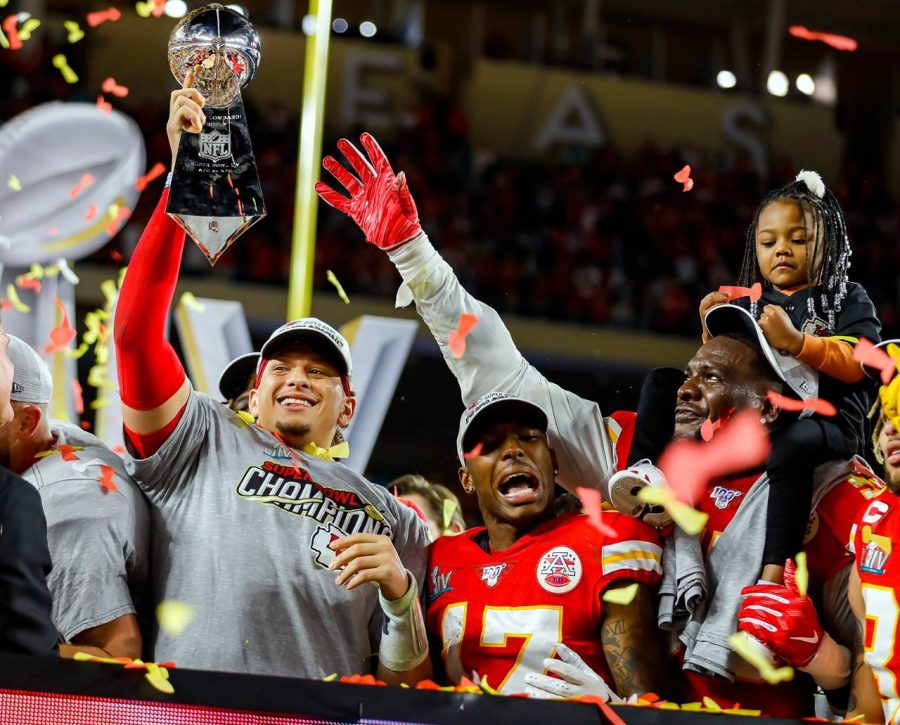 Your Super Bowl LIV champions are the Kansas City Chiefs, as they defeated the San Francisco 49ers 31-20 in comeback fashion on Sunday. Patrick Mahomes has become the youngest player to win both MVP, a Super Bowl title, and be named Super Bowl MVP. In all three playoff games this postseason, the Chiefs had fallen behind the opposing team by at least 10 points, and at some point during the game came back and won. This time around, it took KC until the 4th quarter to get going, but it was just in time. And when they get going, no one is stopping them. The Hunt family finally won another trophy won by playing this great game that beloved team owner Lamar Hunt, who had passed away in 2006, named the Super Bowl.

The 1st quarter kicked off at 6:30 PM at Hard Rock Stadium in Miami. The 49ers struck first as Robbie Gould kicked a 38 yard field goal, putting the Niners up 3-0 with a little less than 8 minutes left in the quarter. The Chiefs responded by driving down the field, and converting a 4th and 1 at about the 5 yard line. Then at about the half yard line, Mahomes ran it in for a Chiefs touchdown, with about 30 seconds left in the 1st quarter. The Chiefs went up 7-3. Not far into the 2nd quarter, Jimmy G made the poor decision of throwing the ball up as he got hit by a Chiefs defender, and Bashaud Breeland was there to pick him off. Damien Willams moved the chains on 4th and 1, but unfortunately the Chiefs were unable to get another 1st down. They settled with a 31 yard field goal attempt which Butker put right through the uprights to give the Chiefs a 10 point lead. San Francisco drove down the field, and got inside the 20, and Garopollo threw a pass to the fullback Kyle Juszczyk who broke away from a defender and ran in for a touchdown. Juszczyk is the first fullback since 2003 to score a TD in the Super Bowl. The 49ers now tied the game 10-10. With only seconds left in the 1st half, Jimmy G threw a bomb to tight end George Kittle, but Kittle was flagged for offensive pass interference so the pass did not count. The 2nd quarter ended with a rare halftime tie with 10 points a piece.

The 3rd quarter began with the 49ers kicking a 42 yard field goal, taking the lead 13-10. Kansas City had the ball at about their 45 when Nick Bosa the rookie got to Mahomes and caused him to fumble the football. Luckily, unlike Cam Newton in Super Bowl 50, Mahomes dove for the ball and recovered it. But the very next play Mahomes threw a pass intended for Tyreek Hill, but got intercepted by Fred Warner. Mahomes paid for that INT as Raheem Mostert ran in for a touchdown, putting the Niners up by 10. The 3rd quarter ended with the Niners winning 20-10. The Chiefs got into Niner territory and were poised to come away with at least some points when Mahomes, targeting Tyreek Hill again, threw it behind him and Tarvarius Moore picked it off. Kansas City was able to stop the Niners and on 3rd and 15, giving the ball back to Kansas City. Mahomes threw a pass somewhere around 80 yards to Tyreek Hill, and a defensive pass interference on the play got the Chiefs closer to the end zone where Mahomes connected to Travis Kelce for a TD. The score now 20-17, Niners leading. With a nice catch and run by Sammy Watkins, Damien Williams caught a TD pass to give the Chiefs the lead back, 24-20. After the 49ers failed to convert on a 4th down, Damien Williams, on the Chiefs first play, ran for a TD. In desperation mode, Jimmy G threw to Deebo Samuel, but Kendall Fuller picked it off, sealing the game for the Chiefs winning 31-20.

Finally, after 50 years, Chiefs Kingdom gets to bring home another Lombardi trophy.

Patrick Mahomes won Super Bowl MVP, throwing for 286 yards, 2:2 TD:INT ratio, and completed 26/42 passes. It wasn’t his best game by a long shot, but the 4th quarter comeback is what won him the Super Bowl MVP. Damien Williams also had a great game with 133 yards and 2 TDs. Tyreek Hill had 105 yards and Sammy Watkins 98. For the 49ers, Jimmy G did not play too well, with 1 TD and 2 INTs. He couldn’t lead his team to victory when they fell behind KC in the 4th quarter. Kyle Shanahan made some questionable decisions with the clock as he blew another Super Bowl, after being a part of the infamous Atlanta Falcons 28-3 Super Bowl collapse in Super Bowl LI.

As for Andy Reid, he plans on celebrating by eating the biggest cheeseburger anyone’s ever seen, and he might make it a double. And he earned it.