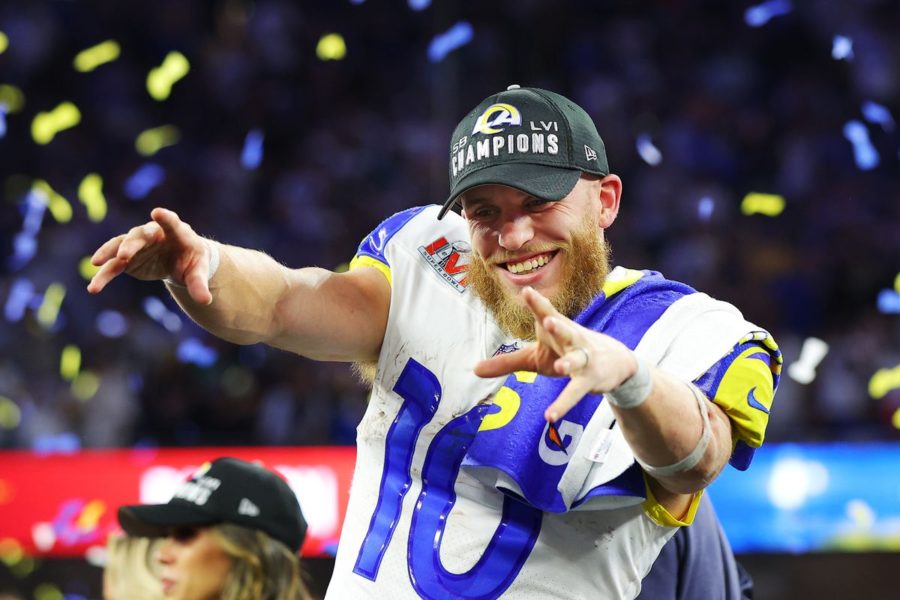 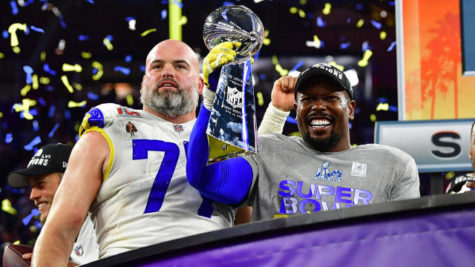 For the second year in NFL history, the Super Bowl featured a home team as SoFi is the Rams’ home stadium. But there was a sizable amount of Bengals’ fans who made the trip to see their team in a place they had not been in for a long time.

The Los Angeles Rams have always been a good team the past few years. They made it to Super Bowl LIII when Jared Goff was still their QB, but struggled to get back since. They believed a QB upgrade was needed and they went all in on Detroit Lions’ QB Matthew Stafford who had much to prove after not winning a single playoff game any of the twelve years he was with Detroit. The season started very well for the Rams, which included the emergence of wide receiver Cooper Kupp who led the NFL in WR receptions, receiving yards, and touchdowns, and brought home the Offensive Player of the Year award. LA then signed former Giants’ and Browns WR Odell Beckham Jr, and traded for Broncos’ linebacker Von Miller. They then became even more of a Super Bowl or bust team. Unfortunately they lost wide receiver Robert Woods to an ACL tear and then proceeded to lose all their games in November. They were able to snag the NFC West from Arizona and entered the playoffs as the fourth seed. Second year running back, Cam Akers, who tore his ACL in July also returned to help out the running tandem of Sony Michel, who the Rams acquired from the Patriots, and Darrell Henderson Jr, who returned for the Super Bowl. The Rams decimated the Cardinals, held on the beat Brady’s Bucs, and came back to beat the Niners en route to the Super Bowl.

The Cincinnati Bengals won four games last year. Joe Burrow tore his ACL, MCL, and LCL in his rookie season and head coach Zac Taylor was on the hot seat. Cincy, despite most fans pleading for them to draft offensive lineman Penei Sewell, took wide receiver Ja’Marr Chase fifth overall in the draft to reunite with his old LSU QB in Burrow. They also built up their defense with signing including Trey Hendrickson and Vonn Bell of the Saints, and Mike Hilton from the Steelers. Cincy started the season on a surprise high note, with the Burrow to Chase connection showing early. but the team struggled with consistency including a crazy loss to Mike White’s Jets. The Bengals were able to put it together enough to win the AFC North in what was expected to be a tough division, and claim the fourth seed in the AFC. They then proceeded to win their first playoff game in thirty-three years against the Raiders, and beat a team on the road in the playoffs for the first time ever in the Raiders. They finally then came back and beat Mahomes’ Chiefs to enter into the Super Bowl.

Entering the game, the Bengals featured a young, explosive offense centered around Joe Burrow, who won the Comeback Player of the Year award, with an elite running back in Joe Mixon, one of the best wide receiver cores that included Chase, who won the Offensive Rookie of the Year award, Tee Higgins, and Tyler Boyd, and tight end CJ Uzomah, who played after spraining his MCL in the championship game. Rookie kicker, Evan “Shooter” McPherson, has been a clutch game-changer, and the defense even before the free agency acquisitions featured safety Jessie Bates iii, defensive tackle DJ Reader, and linebacker Logan Wilson. The team would be without defensive tackle Larry Ogunjobi. The biggest and most obvious weakness of the Bengals was the offensive line. Burrow was already sacked twelve times in the playoffs before the Super Bowl, and going up against guys like Donald and Miller proved a heavy task for the struggling line.

This is the youngest head coach matchup in NFL history with Zac Taylor (38), and Sean McVay (36). It is also only the second time two first overall picks face off in the Super Bowl in Burrow and Stafford. The first time being Peyton Manning and Cam Newton in Super Bowl 50.

Quarter 1: Trey Hendrickson sacks Stafford on the Rams’ opening drive, and Darrell Henderson Jr gets nowhere on the following handoff and they punt to Cincy. Tyler Boyd picks up most of the yards but running back Samaje Perine cannot pick up the remaining yard on third down. Burrow tries to force the ball on fourth & one, and LA gets the ball at about midfield. Stafford shows off his wheels as he runs and slides near the line-to-gain. Cooper Kupp catches a pass on third down, and makes a few moves to get inside the twenty-five. Airing a pass into the endzone on third down, Stafford hits OBJ for the first points of the Super Bowl. 7-0 LA. Burrow cannot connect with running back Chris Evans, and they punt to the Rams. With the ball back, Joe Mixon steamrolls his way for the first down. Burrow going deep, Ja’Marr Chase beats Jalen Ramsey and makes an insane one-handed grab inside the ten. The Rams defense holds Cincy to an Evan McPherson twenty-nine yard field goal. 7-3 LA.

Quarter 2: Stafford finds a wide open OBJ on third & eleven and Odell takes LA into Cincinnati territory. He then drops in a pass for Henderson along the left sideline down to about the fifteen. Stafford fakes the handoff, and rolling out right, finds Kupp in the back of the endzone for the touchdown. Pro Bowl punter, Johnny Hekker makes the rare mistake of fumbling the snap for the extra point, and they are unable to get the kick off. 13-3 LA. A variety of Cincy’s offensive playmakers pik up first downs on the drive including Ja’Marr grabbing a ball thrown behind him one-handed, and proceeded to pick up the first down. Burrow pitches back to Mixon, who then instead of attempting to run, throws the ball into the endzone where it is caught by Tee Higgins for the touchdown. 13-10 LA. On a second & nine play for the Rams, just outside of midfield, Stafford throws to OBJ running a slant. As Odell goes to make the catch he goes in pain with a non-contact injury which later confirmed to be a torn ACL. Tight end Brycen Hopkins picks up the first down on the following play after the brutal loss of Odell. After getting set back, Stafford heaves a prayer into the endzone in the vicinity of wide receiver Van Jefferson, but Jessie Bates iii intercepts it. Since Bates picked off the pass in the endzone, the Bengals’ offense would usually get the ball at the twenty-five yard line, but inactive cornerback Vernon Hargreaves, was flagged for running onto the field to celebrate in the endzone with the defense after the turnover, resulting in the offense getting pushed back. Hargreaves’ boneheaded decision proved costly as Burrow is sacked on the second third down. Halftime: 13-10 LA.

Quarter 3: One the very first play of the second half, Burrow tosses a bomb to Higgins on the left sideline, who appears to have overpowered Ramsey, and runs the rest of the way for the touchdown. The replay did show that a facemask should’ve been called on Higgins, but no flags were thrown so the TD stood. 17-13 CIN. On the Rams first play with the ball, Stafford targets wide receiver Ben Skowronek, but he stumbles on his route, and the ball goes off his hand and into the arms of corner Chidobe Awuzie for the interception. Burrow runs for the first down on third & one. Donald and the defense hold after that, and McPherson makes a thirty-eight yard field goal. 20-13 CIN. Hopkins magically slips between two defenders for the first down. Henderson flips the ball back to Kupp on third & five, and Kupp attempts to throw to Stafford, but overthrows him, failing to pull off the LA Special. Gay makes the forty-one yarder. 20-16 CIN. Burrow gets sacked again and they punt. Stafford is sacked on third down, and gets up a little gingerly. Burrow cannot escape in time, and Von Miller brings him down for the sack.

Quarter 4: Stafford cannot hook up with Jefferson and they punt away. Burrow running, hits Tyler Boyd for a good gain past the thirty. Once again, Burrow is swarmed and sacked, and he is hurt and limps off the field. Stafford throws horizontally to Jefferson for a play. With the ball back, Mixon rumbles for the first. Boyd looks up field to early, and rops the third down pass. Akers is stopped on third down, but a handoff to Kupp on fourth proves successful. Kupp hauls in a pass into Cincy territory and inside the twenty-five. A questionable holding call is thrown on linebacker Logan Wilson, who made a good play defending a pass on Kupp. Second & goal, Stafford throws a quick pass to Kupp in the endzone as Kupp beats Eli Apple again and makes the catch. 23-20 LA. Just over a minute left. Chase makes a great play on Ramsey, and gets past the forty. Burrow then hits Boyd who takes a big hit, but holds onto the ball at around midfield. Perine gets the handoff on third & one up the middle, but is stopped by Donald. Fourth down, Burrow is pressured almost immediately, and as Donald brings him to the ground, Burrow throws up the ball in the direction of Perine, but he cannot haul it in, and the Los Angeles Rams win Super Bowl LVI.

Matthew Stafford went from never winning a playoff game with Detroit, to winning the Super Bowl in his first year in LA, proving he can win when it matters. Fans around the NFL are happy to see Stafford succeed to the highest degree and come out of it giving the Rams their second Lombardi. He completed twenty-six of forty pass attempts for 283 yards, and three TDs to two INTs. Cam Akers led the team in rushing with just twenty-one yards as the run game was stuffed by the Bengals’ d-line all game. Cooper Kupp had ninety-two receiving yards and two TDs. Kupp also was awarded Super Bowl MVP, adding more to his historical season which also included OPOY, and getting the triple crown. It took a bit for the Rams’ defense to get going, but once they did, Burrow stood no chance, as they sacked him seven times.

It was also an especially special day for Van Jefferson as after he won his first Super Bowl, he was notified that his wife went into labor during the game, and soon after, he was holding his newborn son.

The city of Cincinnati came so close to their first Lombardi, and it all came down to, guess what, the offensive line. Burrow was sacked a total of seventy times this season. Regular and post combined, he now holds third in most sacks taken in an entire season all time. Getting sacked seven times in the Super Bowl ties the record for most sacks taken in the big game. Joe Shiesty did all he could, completing twenty-two of thirty-three pass attempts for 263 yards and a TD. Joe Mixon picked up seventy-two rushing yards and a passing TD. Tee Higgins total 100 receiving yards and a pair of TDs. The defense shut down the Rams’ run game but could only keep Kupp in check for so long.

Cincy may have missed their only chance to win a Super Bowl with Burrow under center just because of how stacked the AFC is. But if they can build up their o-line, they could very well reach it again.

The Rams now run into a situation of who to pay and who they will have to let walk. Aaron Donald said he will come back if the team can bring back the guys they have, and he will wait to consider retirement so they can run it back.