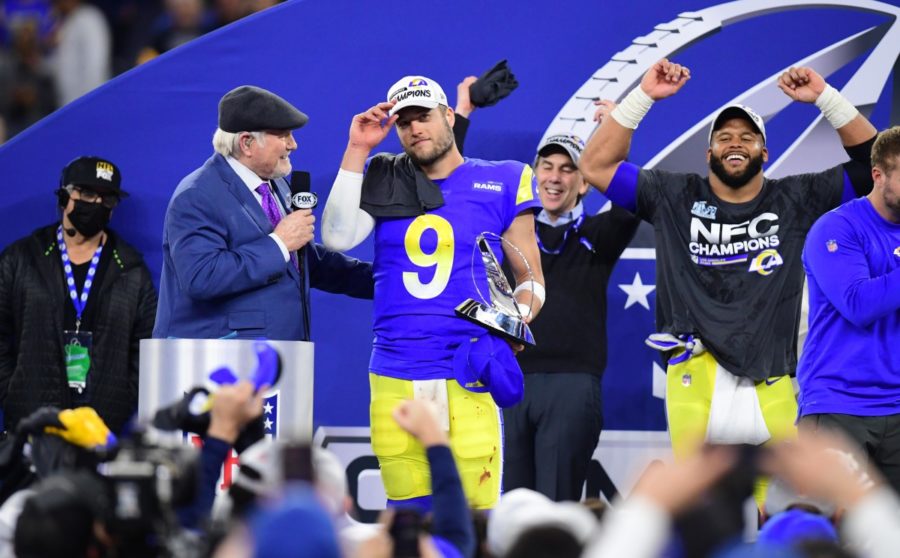 Matthew Stafford has won two straight playoff games. Now only one away from the Super Bowl.

The Rams went all in this season trading for Lions’ QB Stafford. They also went and grabbed wide receiver Odell Beckham Jr, and linebacker Von Miller along the way as well. This team became Super Bowl or bust.

The San Francisco 49ers, after a rough 3-5 start to their season, they picked it up and got in the playoffs as the sixth seed, and took care of Dallas and upset the Packers. Now they find themselves facing their division rival Los Angeles Rams for a third time this season.

While the Rams appear the superior team, the Niners swept them again this season. 49ers head coach Kyle Shanahan seems to have Sean McVay’s Rams figured out, but playoffs are a whole other playing field.

This was a prove it game for Stafford to cement even further it was Detroit holding him back all these years.

Quarter 1: Stafford hits star breakout wide receiver Cooper Kupp down the middle of the field and across the fifty. Running back Cam Akers, who made his season appearance Week 18 after suffering a torn ACL in July, plows through the lines and inside the ten. Stafford then targeting Kupp, throws behind him, and the pass is batted in the air and intercepted by safety Jimmie Ward, who takes it out past the twenty. A short pass by Jimmy Garoppolo to rookie running back Eli Mitchell gets into LA territory. A dangerous pass to wide receiver Brandon Aiyuk goes incomplete on third down. San Fran’s special teams fields the punt inside the Rams’ five.

Quarter 2: Third down for the Rams, Stafford takes off and picks up the first down. Kupp makes a catch along the sideline in the redzone. A long third down follows but Kupp, backpedaling in the back of the endzone, makes the catch. 7-0 LAR. Jimmy G drops a pass in for Aiyuk who secures the pass and goes down to the Rams’ forty. A screen to breakout wide receiver Deebo Samuel is successful as Deebo goes all the way for the touchdown. 7-7. OBJ makes a sliding catch on third & long. The Niners defense holds after, and kicker Matt Gay attempts a fifty-four yard kick, but misses it wide right. Tight end George Kittle snags the ball, and picks up the first on third & eight for San Fran. Garoppolo hits Aiyuk on a slant with time ticking down. They get into good field goal range in time, as kicker Robbie Gould makes a thirty-eight yarder to wrap up the half. 10-7 SF.

Quarter 3: Jimmy G’s pass on third down is tipped and incomplete for Kittle. OBJ toe-taps on the sideline to pick up the first down past their twenty. Right after, Stafford finds OBJ again as he gets stops just before midfield. Stafford, QB sneaking on fourth & one, cannot cross the line, and San Fran gains possession of the ball. Wide receiver Jauan Jennings makes the catch on third & ten and powers forward to get across the line-to-gain. Looking in the endzone, Garoppolo drops a pass in for Kittle, and he makes the leaping grab for the touchdown. 17-7 SF. Running back Sony Michel, after receiving the handoff, pitches the ball back 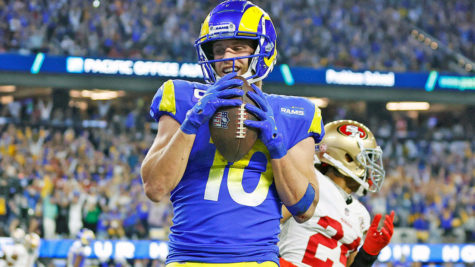 to Stafford who dumps it off to tight end Kendall Blanton, and he runs down inside of the twenty.

Quarter 4: In response, the Rams put together a drive capped off by a touchdown catch by Kupp. 17-14 SF. The defense also holds up, stopping fullback Kyle Juszczyk on third down. Stafford bombs a pass deep, intended for wide receiver Van Jefferson, but its falls right into the arms of safety Jaquiski Tartt, but then Tartt drops the interception, cutting the Rams a huge break. Stafford rebounds with a good ball to OBJ. A quick pass to Kupp goes for fifteen yard on third & ten. Michel gets wrapped up in the backfield so LA settles for a forty-yard field goal by Gay. 17-17. Elite cornerback, Jalen Ramsey cuts in front of Aiyuk’s route and nearly intercepts Jimmy G’s pass. Stafford hits Kupp on a quick slant on third & three, and Kupp rumbles to just outside the Niners ten. The defense sacks Stafford, making it third & eighteen, and a quick pass gives Gay a thirty-yard attempt, which he makes. 20-17 LAR. On third & thirteen with the game on the line, Jimmy G scrambles in the pocket, and getting pressured by Aaron Donald and Von Miller, flings the ball up in desperation, and it is intercepted by safety Nick Scott sealing the game for the Rams. 20-17 LAR.

Looks like all the trades the Rams made payed off, and they are staying in LA for the Super Bowl. They will be the second team ever, after the Buccaneers last year, to play in the Super Bowl at their home stadium. They had to get past the 49ers who have been a thorn in their side the past few years, and the Rams showed up when it mattered the most.

Their biggest reason for reaching the big game is Matthew Stafford who in the Conference Championship completed thirty-one of forty-five pass attempts for 337 yards two TDS and one INT. Stafford has decreased his turnovers in the postseason, and has been gifted with wins. As the game came down to the end, the running game wasn’t relied on as much. Cam Akers rushed for just forty-eight yards. The receivers had big days with Cooper Kupp totaling 142 yards and OBJ had 113 as well. The defense had zero sacks but guys like Aaron Donald Von Miller did enough to impact the game.

After dominating the Rams game after game, San Fran could not pull off the crucial win. Jimmy Garoppolo completed just above fifty percent of his passes for 232 yards and two TDs to one game-ending INT. Deebo Samuel led in rushing yards with just twenty-six, and also led in receiving with seventy-two. Nick Bosa had 1.5 sacks but it wasn’t enough to keep Stafford and the Rams from coming back and taking the NFC crown.