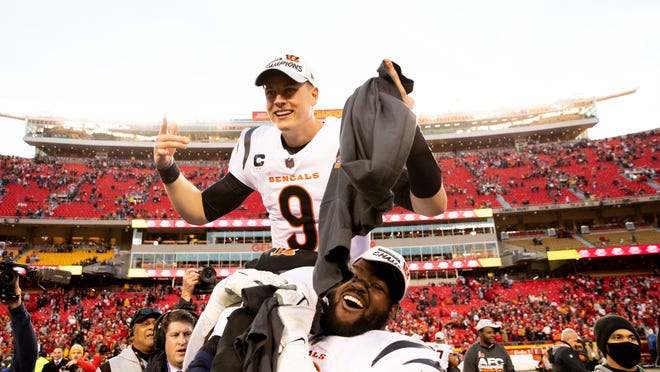 Cincinnati Bengals’ defensive tackle, Tyler Shelvin, carries quarterback Joe Burrow on his shoulder after 27-24 win over the Kansas City Chiefs in the AFC Championship game. Burrow and Shelvin were also former teammates back at LSU, and recreated the picture just like the one taken when they won the National Title.

Joey B, Joe Burrow, Joe Cool, Joe Shiesty, Joe Brrr, whatever you call him, has done the improbable and brought the Cincinnati Bengals back to the Super Bowl after thirty-three years 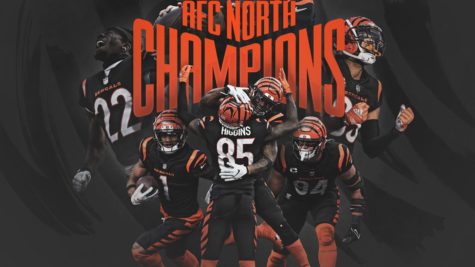 At the beginning of the season, the Bengals Super Bowl odds ranged from 75 to 200-1, but they defied all that, first winning the AFC North, following that up with taking down the Raiders, 1-seeded Titans, and most recently, Patrick Mahomes and the KC Chiefs.

The Chiefs were coming off breaking so many Bills’ fans hearts after playing one of the greatest games ever and eliminating Josh Allen’s Bills.

Now predictably, the Chiefs were the betting favorites to win, mainly due to do their recent successes, the fans making it difficult to play at Arrowhead, and the Bengals being new to the elite tier. Their offensive line also garnered some concern as well, allowing Burrow to get sacked nine times last week. But the Bengals did beat the Chiefs back during the regular season, in a comeback, last second win, so they could do it again, with all that offensive firepower.

Quarter 1: Mahomes begins to lead the Chiefs on a drive with the help of running back Jerick McKinnon. Mahomes then runs right and fires a pass to wide receiver Tyreek Hill in the back of the endzone for the first points of the game. 7-0 KC. Joe Burrow takes off on third & five, and picks up the first. Running back Joe Mixon from inside the forty, shakes some tackles, and powers to about the fifteen. Burrow and star rookie wide receiver Ja’Marr Chase, cannot connect in the endzone on third down, and clutch rookie kicker, Evan McPherson, hits a thirty-two yard kick. 7-3 KC. As the first quarter winds down, Mahomes airs one forty-five yards deep, and is snatched by wide receiver Mecole Hardman all the way down at the Bengals’ thirty-yard line.

Quarter 2: Scrambling all over the place, Mahomes finally lets the ball go, and it is caught by tight end Travis Kelce for the touchdown. Bengals fail to move the ball far, and Chiefs regain possession. Mahomes finds Kelce in Cincinnati territory, and the big tight end picks up a few extra yard after the catch. Running back Clyde Edwards-Helaire gets around the run defense, and rushes inside the twenty-five. Kelce makes a man miss, and he’s just a few yards short off the endzone. A quick pass to Hardman on an out route gets the Chiefs their third touchdown of the day. 21-3 KC. Burrow throwing on the run, connects with wide receiver Tee Higgins inside Chiefs’ territory. Soon after, a dump off, screen pass to running back Samaje Perine, is taken the forty-one yards for the score. Just what Cincy needed. 21-10 KC. Mahomes throws a bomb, and who else but Tyreek Hill is there to make the play just across the fifty. Pass interference is called on cornerback Eli Apple, and the Chiefs get the ball at the one-yard line with five seconds remaining in the half. Kansas City opts to go for it instead of kicking a field goal before the half ends, and Hill is stopped by Apple. 21-10 score at Halftime.

Quarter 3: Cincinnati stops KC on the first drive of the second half. Burrow hits a wide open wide receiver, Tee Higgins, who hauls in the pass around their forty, and takes it to about the Chiefs’ forty. The drive stalls after that, and they punt it away. They get the ball back, and Burrow, slipping out of sacks, finally finds Chase in Chiefs’ territory. KC holds them to a field goal attempts, and McPherson hits the thirty-one yarder. 21-13 KC. Mahomes, seemingly trying to hurry, gets his pass blocked and intercepted by defensive lineman B.J. Hill. Chase takes a pass inside the five, and then makes the aggressive touchdown grab. Burrow hits wide receiver Trent Taylor on an out route for the two-point conversion. 21-21 all tied up.

Quarter 4: Buying all the time he can on third down, Mahomes buys too much, and gets sacked. Burrow airs one along the left sideline for Chase but is picked off by cornerback L’Jarius Sneed. Mahomes is sacked again on third down, as Cincy’s defense keeps KC from getting anything off of the turnover. Third down for Cincy. Burrow somehow slips away from star defensive lineman Chris Jones twice, and uses his legs to pick up the first down. Higgins, coming across the field, picks up the first down, and barrels ahead to the inside of the Chiefs’ thirty-five. The drive results in a McPherson field goal. 24-21 CIN. On third & short, Mahomes hits Kelce across the fifty, and down to the thirty-eight. McKinnon then runs his way down to the fifteen. The Chiefs’ offense gets down to second & goal, but Mahomes trying to buy time, gets sacked. With all the time in the world, Mahomes can’t find anyone, and is strip sacked. Kansas City recovers the ball but it is now fourth down making the field goal longer with the sack yards lost. Kicker Harrison Butker lines up to attempt the forty-four yarder to send the game into overtime. He drains it and the game tied 24-24 heads to OT.

Overtime: The Chiefs win the coin toss again, and get the ball first. But on the third play of OT, safety Vonn Bell intercepts the batted pass intended for Hill. The Bengals begin to drive. Mixon hits a hole, and goes down to the eleven. This is followed up by McPherson coming out to kick the game winner, and from thirty-one yards out makes it. Bengals win 27-24.

Joe Brrr and the Cincinnati Bengals are headed to the Super Bowl at SoFi! Who would’ve thought Cincy would make it this year, but here they are, taking down Mahomes and company in the AFC Championship game after not winning a playoff game since thirty-three years ago till this year.

This Bengals’ loaded offense is the main reason they are where they are today.

Joe “Cool” Burrow completed twenty-three of thirty-eight pass attempts for 250 yards and two TDs to one INT. Joe Mixon had a solid game on the ground with eighty-eight rushing yards. Tee Higgins was the star receiver with 103 yards and 17.2 yards averaged per reception. The offensive line, while being the team’s main weakness, only let Burrow get sacked once, but it helped with Burrow’s versatility in evading other potential sacks as well. They’ll need to stiffen up more for the big game going up against guys like Aaron Donald and Von Miller. The defense, after a shaky start, played much better in the second half and OT, holding the Chiefs to just three points after the first half. Guys like Trey Hendrickson, Logan Wilson, Jessie Bates iii, and Vonn Bell were some of those key players.

After making the Super Bowl the past two years, Kansas City now falls just short. This year has been unpredictable, and them blowing another lead to the underdog Bengals just puts the cherry on top. Patrick Mahomes completed twenty-six of thirty-nine attempts for 275 yards and three TDs to two costly INTs. Jerick McKinnon rushed for sixty-five yards for the team, and Travis Kelce had ninety-five receiving yards. They had a great first half going up 21-3 at one point, but the whole team fell apart after Halftime, and the offense couldn’t move the ball, and the defense could not bring down Burrow or stop their weapons, and it cost them a trip to SoFi.

After being seen as a poverty franchise, and a dumpster fire of an organization, Joey Franchise has turned this organization around, and has a chance to grab the team’s first Lombardi to show for it. Credit to head coach Zac Taylor as well, who was on the hot seat before the season started, and is now in the Bowl. The Los Angeles Rams will be playing at home for the Super Bowl, and have a star studded team of elite, veteran players, but Joe Shiesty has his flashy young team ready to upset.

Whoever wins is a win for the NFL world, but we can all mostly agree that it’s nice not seeing Jackson or Brittney Mahomes back at the big game thanks to Joe Burrow.