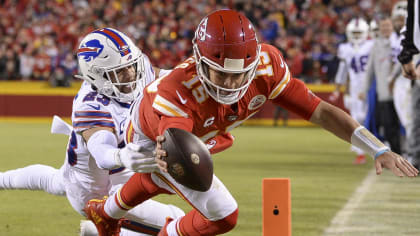 Kansas City Chiefs quarterback, Patrick Mahomes, dives for the pylon, scoring a touchdown in the Chiefs 42-36 win over the Buffalo Bills in the AFC Divisional Round. The Chiefs will advance to their fourth straight Conference Championship game appearance.

Chiefs come out victorious in Divisional Round game in OT against the Bills in one of the best games in NFL history.

We just witnessed one of the best games in NFL history.

In one of the greatest weekends of football, one of the games had to stand out above the rest.

The first three matchups in the 2022 NFL playoff Divisional round were all tied games with four seconds left in regulation decided by game winning field goals as time expired.

Rookie kicker Evan McPherson drained a fifty-two yard field goal to give the Cincinnati Bengals the win over the Tennessee Titans, 19-16.

Tom Brady led the Tampa Bay Bucs on a comeback after going down 3-27, and tied the game up, but Matthew Stafford connected with Cooper Kupp for a huge play into field goal range, which after clocking the ball, set up kicker Matt Gay to kick the game winning twenty-six yard field goal to beat Tampa 30-27.

Sunday Night’s game also came down to the last play to win the game, but it went down a whole different way than the other games.

The Kansas City Chiefs hosted the Buffalo Bills in what is becoming an elite rivalry in the league. Patrick Mahomes vs Josh Allen is a matchup that going to produce many legendary games over the next decade.

The Bills took down the Chiefs during the regular season when KC was in their rut, but they’re far out of that and the two Super Bowl hopeful teams put together one of the greatest games ever.

Quarter 1: Going for it on fourth down on their first drive, Josh Allen takes the ball himself, and runs for the two needed yards and some more. The offense winds up in another fourth down, and running back Devin Singletary runs in for the touchdown. 7-0 BUF. Patrick Mahomes on third down, weaves and dodges the pass rush, and shovel passes the ball to running back Jerick McKinnon for the first down. Mahomes then takes off for a thirty-five yard run down to the Buffalo twenty-five. Third & five, Mahomes pulls a Taylor Heinicke and dives for the pylon for the KC touchdown. 7-7.

Quarter 2: Josh Allen is sacked and punter Matt Haack delivers a beautiful punt that the special teams helps stop at about the one yard line. Chiefs go three & out as a result. Getting the ball back, Mahomes connects with tight end Travis Kelce for a twenty-one yard gain. Mahomes then side arms a pass that somehow gets caught by wide receiver Tyreek Hill. Running back Clyde Edwards-Helaire has a good run down inside the redzone. Mahomes then scrambling back, throws a jump ball into the endzone that is caught by wide receiver Byron Pringle. 14-7 KC. Allen threads the needle on a pass to wide receiver Cole Beasley. Allen continues to use his legs to make his way down the field with under a minute remaining. Backpedaling under pressure, Allen throws toward the endzone, and wide receiver Gabriel Davis snags the ball. 14-14. Chiefs’ kicker Harrison Butker, misses the half ending field goal attempt, and the game remains tied going into Halftime.

Quarter 3: A fake handoff on fourth & one turns into a toss to McKinnon who picks up twenty yards. A holding call stops the Chiefs’ momentum and Butker makes a thirty-nine yard field goal. 17-14 KC. CEH hits the open green and picks up twenty yards following the Bills’ stopped drive. Wide receiver Mecole Hardman takes the handoff, somehow goes untackled, and goes the rest of the way diving for the touchdown. Butker hooks the extra point attempt left. 23-14 KC. Responding to the KC drive, Allen goes deep and hits Davis, who beats his man for a seventy-five yard touchdown. 23-21 KC.

Quarter 4: On third & fifteen, Allen looks to throw but gets sacked. Haack punts from inside their own five, and Hill receives it from just inside KC’s forty, and he speeds down inside Buffalo’s twenty with Haack bringing him down. Bills’ defense clutches up and holds KC to a twenty-eight yard field goal. 26-21 KC. Allen runs for a couple of first downs until he is stopped on a third down run. But they can’t stop him on fourth down, as he scrambles and moves-the-chains. Allen dumps the ball off to Singletary on third down, but the Chiefs’ defense blows it up for a major loss. Now fourth & thirteen, the game on the line, Allen looks and fires, finding a wide open Gabriel Davis in the endzone for the score. Allen finds wide receiver Stefon Diggs in the back of the endzone for the two-point conversion. 29-26 BUF. Needing this drive to be successful to stay alive, Mahomes hits Tyreek Hill in the middle of the fifty, and he outruns the Bills’ secondary and scores with one minute left. 33-29 KC. Allen connects with Davis, entering Chiefs’ territory. Davis and Emmanuel Sanders each pick up first downs. With seventeen seconds left, Allen throws to the endzone, and guess who, Davis catches the touchdown pass. His fourth of the game. 36-33 BUF. Thirteen seconds left in regulation. Mahomes hits Hill, who runs down past the forty, almost to the forty-five. With eight seconds left, Mahomes connects with a little too wide open Kelce, who gets into field goal and down at the Bills’ thirty. Timeout is called with three seconds left, and Harrison Butker drills the forty-nine yard field goal, tying it 36-36, and sending the game to overtime.

Overtime: Josh Allen calls tails on the coin toss. It is heads. The Chiefs elect to start with the ball on offense. Mahomes leads his boys down field. He finds Hardman across the middle, and Hardman runs inside the ten. First & goal, Mahomes targets Travis Kelce, and Kelce makes the catch in the endzone. Kansas City wins 42-36.

In a historical offensive showdown with zero total turnovers, Patrick Mahomes completed thirty-three of forty-four pass attempts for 378 yards and three TDs. He was also the team’s leading rusher with sixty-nine yards, as the passing attack had to be utilized all game long. Tyreek Hill led with 150 receiving yards and a TD. Travis Kelce also had a good game with ninety-six receiving yards and a score. 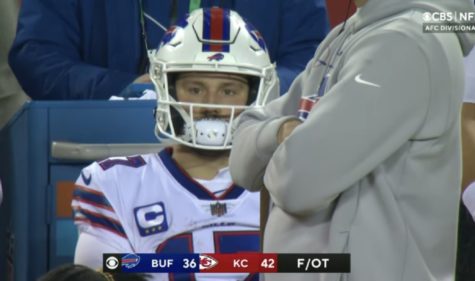 Heartbreak in Buffalo. Thirteen seconds left in regulation. The Bills had that game, but the defense choked hard, and it cost them in overtime.

Zero blame goes to Josh Allen and the offense. Allen played amazing, completing twenty-seven of thirty-seven passes for 329 yards and four TDs. He also led his team in rushing yards with sixty-eight. Gabriel Davis had a historically great performance catching eight passes for 201 yards and caught all four of Josh Allen’s TD passes. All that just for the defense to fail to contain the Chiefs’ offense for thirteen seconds.

I’m sure we all remember Stefon Diggs after last year’s AFC Championship game watching the Chiefs celebrate. He waited almost a full year for his chance at revenge, but now will have to wait another. Diggs only caught three passes for seven yards, mostly because Davis stole the show.

Josh Allen never touched the ball in OT. This brings up the topic if the NFL should change its overtime rules to be more like college football where each offense gets at least one possession to try and score. Mahomes led his offense right down the field and scored a touchdown ending the game. This legendary game really feels like it was decided on a coin toss. Also remember not long ago, KC was in the same position as the Bills when they played the Patriots in the Conference Championship game, and Mahomes never got the ball in OT, since Tom Brady got it first and scored immediately. Now granted, with the Bills situation, there is no excuse to letting the Chiefs score in thirteen seconds. But with that being said, for the better of the entirety of the league the OT rules should be changed.

Nonetheless, the Kansas City Chiefs are going to the AFC Conference Championship to face Joe Burrow and the Cincinnati Bengals with a chance to make their third Super Bowl in a row.