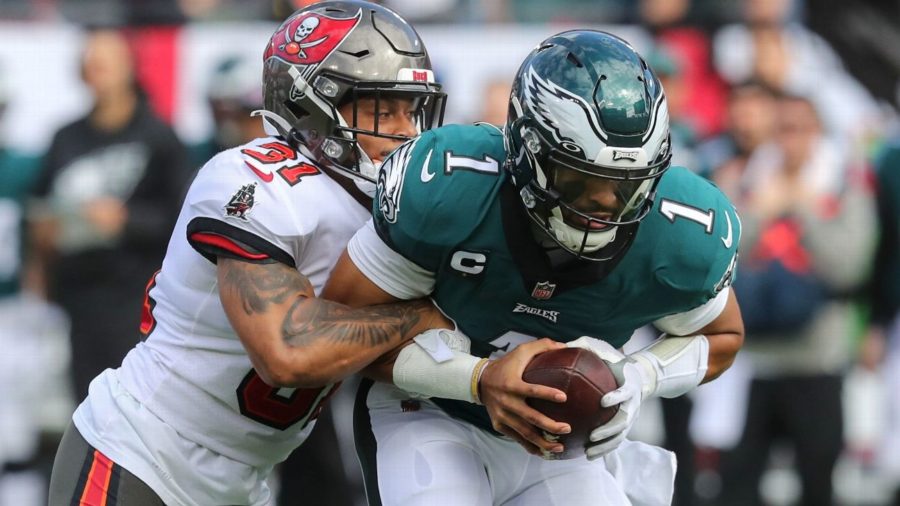 Eagles get embarrassed by the Bucs on Wild Card Weekend

The Eagles were frauds, and teams who got the new seventh seed in the playoffs are now 0-4, and three of those four games were blowouts.

Tampa Bay grabbed the second seed in the NFC. Going into the game were still down a couple key players including wide receiver Chris Godwin, who tore his ACL, running back Leonard Fournette, still dealing with a hamstring injury, and wide receiver Antonio Brown, who was released by the team not long ago.

Even with those factors, teams should always know to never underestimate playoff Tom Brady.

To their credit, the NFC East has a reputation of owning Brady/the Patriots, most knowingly in the playoffs, but only that can hold true for so long.

Quarter 1: Starting the game, Bucs’ running back Ke’Shawn Vaughn carries the ball from the twenty-five down across the forty. After an off-target pass by Brady, a bad roughing the passer penalty is called against Philly, giving Tampa a fresh set of downs. The drive continues, and running back Giovani Bernard take the ball in for the touchdown. 7-0 TB. Philly gets nowhere, and Tampa gets the ball back. Vaughn runs the ball in, after Brady led the offense down the field. 14-0 TB.

Quarter 2: Antoine Winfield Jr, starting safety for the Bucs, wraps up Hurts on third down. Brady then hits star wide receiver Mike Evans down to about mid-field. Tampa proceeds to pound the rock down inside the redzone. The Eagles redzone defense holds steady and force Tampa to kick a thirty-four yard field goal with Ryan Succop. 17-0 TB. Philly finally begins to orchestrate a drive, and even convert a fourth down with a catch by Dallas Goedert. Going for it again, this time on fourth & long, Hurts fails to convert, and Brady regain possession, but is swallowed up on third down on a quick three & out. Hurts lets one fly, and Quez Watkins makes the catch in Tampa territory with ninety seconds left in the half. Then backpedaling and rolling out to his left, Hurts fires looking for Devonta Smith in the endzone, and gets intercepted by safety Mike Edwards. Halftime: 17-0 TB.

Quarter 3: Escaping the pocket, Hurts fires a pass to Goedert across the fifty. The drive stalls, and after the Bucs punt back to the birds, Jalen Reagor, who is back to field the punt, muffs it, and Tampa’s special teams recovers the ball. A quick pass to Bernard gets the offense down to the Eagles’ twenty-five. Tom Brady connects with a wide open Rob Gronkowski for the touchdown. 24-0 TB. Miles Sanders gets a couple chunk plays, before Hurts attempts a fourth down conversion, and the ball is tipped and intercepted by Shaq Barrett. The first play after, Brady capitalized by throwing a thirty-six yard touchdown pass to Evans. 31-0 TB.

Quarter 4: Devonta Smith catches a pass in the backfield and takes it down inside the thirty-five. A handoff to Boston Scott goes for thirty-four yards and the Eagles first points of the day. Goedert shakes a tackle and enters Tampa territory. Hurts a pass off to Kenny Gainwell on a screenplay that takes the ball just outside the twenty. Gainwell then catches the first down pass, and powers into the endzone. Smith makes a great catch for the two-point conversion. 31-15 TB. The Bucs recover Philly’s onside kick. As the clock hits zeros, Hurts chucks a ball deep, and is caught by Tom Brady on the sideline, as he throws his hands up in jubilation as Tampa wins 31-15.

The Buccaneers will advance to the divisional round where they will play the Los Angeles Rams with Matthew Stafford who is coming of his first playoff win ever in his career.

Tom Brady completed twenty-nine of thirty-seven pass attempts for 271 yards and two TDs. Ke’Shawn Vaughn led the team with fifty-three rushing yards and a TD, and Mike Evans posted 117 receiving yards and a score. The defense was stout, and contained Jalen Hurts well.

Tampa Bay had little issues despite missing some key players including offensive tackle Tristan Wirfs who went out of the game with a concussion. Their run game was still very efficient with third and fourth stringers Bernard and Vaughn leading the way.

While they able to get by the Eagles, these missing pieces may hurt them much more against a higher quality team like the Rams with Super Bowl aspirations.

The Philadelphia Eagles now hold the nineteenth overall pick in the draft. A quick one and done in the playoffs proves they did not belong there, especially considering the fact they were done thirty-one points at one point.

Jalen Hurts completed twenty-three passes for 258 yards and one TD to two INTs. He was also the team’s leading rusher with thirty-nine yards. Dallas Goedert had an efficient ninety-two receiving yards.

After Hurts’ lackluster performance in the playoffs, is it for sure time to know to begin the search for a new QB? General Manager Howie Roseman does not think so as he stated Hurts will be their starting QB for 2022. If the team can commit to his development, there might be some steady growth next season instead of so much inconsistency. but hey, at least the Cowboys lost too.