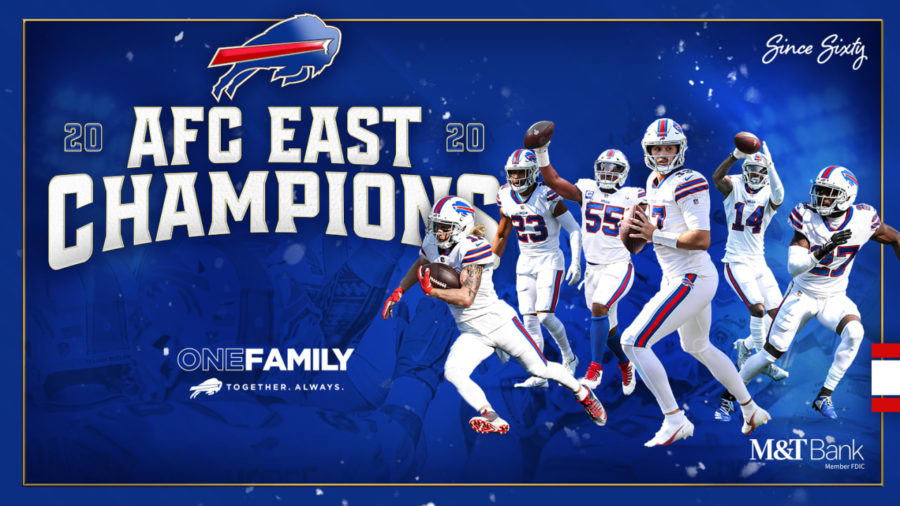 The NFL world can rejoice.

The Bills have kept the New England Patriots from winning the AFC East once again.

This time it was a much closer call than last year, with the two rivals with matching records going into Week 18. New England just had to hope the Jets would play spoiler and upset Buffalo, and the Pats just needed to take care of Miami.

Well neither things happened as Miami dropped thirty-three points on Mac Jones’ team, and Buffalo did their usual work on the Jersey Jets.

Quarter 1: On the opening drive at the fifty yard line, running back Devin Singletary breaks free and rushes for forty yards down to the ten. On third & goal, Josh Allen runs to the right side of the field, and as he is getting brought down by a Jet defender, he gets the pass off, and somehow completes to wide receiver Stefon Diggs who came back across the endzone, and toe drags for the touchdown. 7-0 BUF. After stopping the Jets offense, Allen is able to dump off a pass to Singletary, who crosses over the forty. Allen then almost has a TD to Diggs, but the call is overturned. Kicker Tyler Bass ends up kicking a forty-one yard field goal. 10-0 BUF. Zach Wilson, planting his feet, throws a dart to wide receiver Jamison Crowder at around the forty. Then running on a third & ten, Wilson is tackled short of the first down. As punter Braden Mann goes to punt the ball back to Buffalo, special teamer Cam Lewis blocks the punt, and Jaquan Johnson recovers the ball for Buffalo.

Quarter 2: Zach Wilson, on third & thirteen, tries to bide time, but cannot find anyone, and is sacked. After a few punts back and forth, the Jets enter Buffalo territory and opt to go for it on fourth & five. They convert it as Wilson throws a nice accurate pass to wide receiver Keelan Cole Sr, who continues to run down the field and into the endzone. 10-7 BUF. In a two minute drill, the Bills offense drives. Allen takes off on a first down play, and pitches the ball back about half a yard to tight end Dawson Knox, who gets the rest of the yardage needed to get the new set of downs. A DPI on cornerback Bryce Hall, sets up a twenty-one yard field goal for Bass. 13-7 BUF at Halftime.

Quarter 3: On third down, Wilson stands still in the pocket and is sacked by Ed Oliver. Later on, the Bills are punting back to New York, but the punt is botched with all kinds of confusion as punter Matt Haack gets chased by Jets’ special teamers, and is tackled as he punts the ball, which only reaches about their own thirty yard line. Wilson gets chased backwards, and New York then send out the kicking team. Eddy Pineiro makes the forty-nine yard kick. 13-10 BUF. Allen gets blitzed on third down, but stays calm in the pocket, and drops in a beautiful pas for Knox across midfield.

Quarter 4: With the ball back, Wilson gets sacked, and on the next play, throwing from his own endzone, gets his pass knocked down. Allen, like he does so often and so well, takes off running, and picks up about thirty yards with his legs. On third down, Allen buys time looking for a receiver. He jumps back and dumps the the ball into wide receiver Isaiah McKenzie for the first down. The following set of downs, Devin Singletary finds his way into the endzone for the score. 20-10 BUF. Needing to overcome a ten-point deficit, Wilson looks on third down, but gets sacked by Jerry Hughes, marking Buffalo’s 8th sack of the game. Rolling out of the pocket, Allen hits wide receiver Gabriel Davis for a twenty-eight yard completion. A quick catch-and-run touchdown by Singletary practically puts the game away. Final: 27-10 BUF.

With the win over the Jets, the Buffalo Bills, at 11-6, have clinched the AFC East in back-to-back seasons. The Patriots have not.

After some inconsistencies from the team during the season, Allen and them have appeared to have toughened up at the right time. Josh Allen completed twenty-four of forty-five passes for 239 yards, and two TDs. Devin Singletary has been playing better football as of late, expanding their run game outside of Allen. Singletary rushed for eighty-eight yards and a TD. Stefon Diggs had a solid day with eighty-one receiving yards and a TD. The pass rush had a huge day. The defense racked up a total of nine sacks on Zach Wilson. Mario Addison and Jordan Poyer each got two respectively.

For the Jersey Jets, they finish with a 4-13 record, and last in the AFC East. Zach Wilson completed a rough seven of twenty pass attempts for eighty-seven yards and a TD. He also led the team in rushing yards with twenty-four. Keelan Cole had fifty-four receiving yards and one TD. Not really much to say on the team’s performance other than its what was expected. Wilson has shown overall improvement throughout the season, so hopefully that continues into next season.

The Bills enter the postseason as the number three seed in the AFC. And who is the first team standing in their way? The New England Patriots. The division rival they split with in the regular season, but they had the more dominant win in ideal conditions. But just like how you can’t count out Tom Brady in the playoffs, the exact thing can be said for Bill Belichick. So as long as Buffalo does not underestimate their competition, they are in for a further extended season.