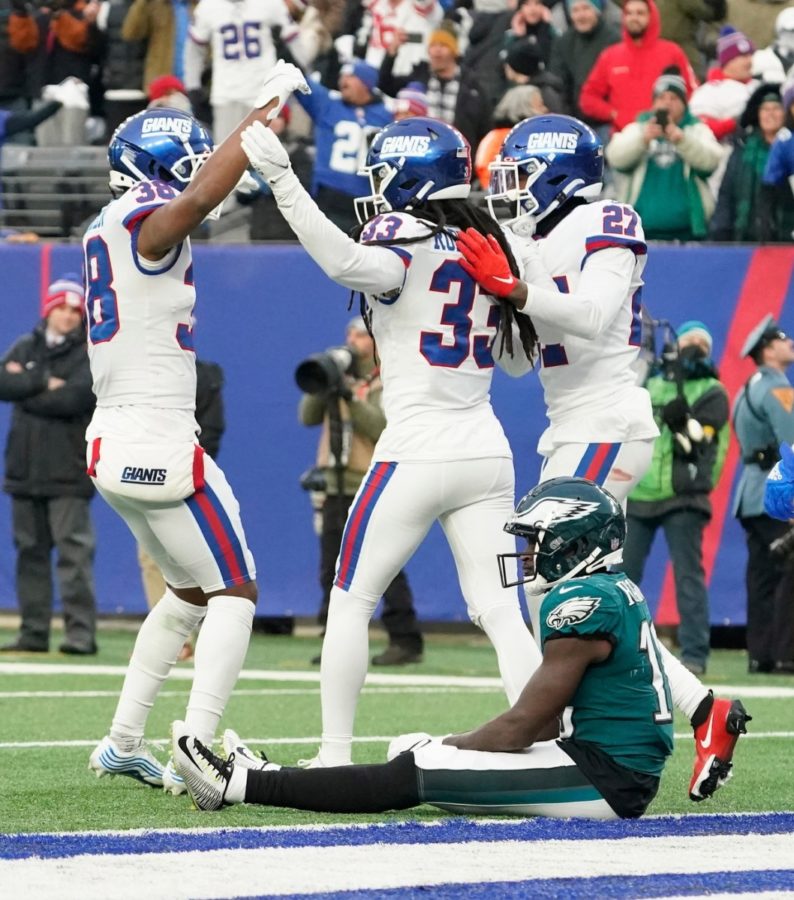 Well that was a punch in the gut for the Eagles and their fans.

The Eagles, with a chance to get ahead in the race for the postseason, in a seemingly almost certain victorious matchup against the struggling and injured New York Giants, did not go as planned.

After a dominating win over the Saints, with a three rushing TD performance by Jalen Hurts, people were looking at the team as playoff bound, while the Giants fell in convincing fashion to Tom Brady’s Buccaneers.

Just when people thought Philly found an identity, they go out as blow a game they could’ve easily won.

Quarter 1: A quiet early first half starts the game until the Giants begin to drive and Daniel Jones QB sneaks the ball on fourth & one and gets the first down. Eagles hold them to a thirty-five yard field goal attempt by Graham Gano after Darius Slay forces an incomplete pass that was intended for wide receiver Kenny Golladay, who was Slay’s old teammate back in Detroit. 3-0 NYG. Hurts finds Quez Watkins on third down along the sideline, as Watkins makes a great effort to catch the ball and stay in bounds. Now despite having a clean pocket, Hurts misses Watkins this time, and is intercepted by Darnay Holmes.

Quarter 2: Gano attempts a fifty-one yard field goal but has a rare miss. Giants blitz from the corners, and Hurts barely gets the ball away, but it falls incomplete on fourth down. Saquon Barkley, back from injury, gets out to the left, and runs to about mid-field. On a third & very long, under pressure, Jones throws it to tight end Evan Engram, who can’t make the catch as the ball goes threw his hands and into Avonte Maddox’s for an almost interception but he was out-of-bounds. Hurts takes off running, and enters New York territory with under two minutes left in the half. Hurts escapes again, and runs down to about the twenty. Jalen Reagor then makes a good catch right outside the endzone setting Philly up for a potential score before Halftime. For some reason, the Eagles opt to attempt on a third & short at the one-yard line, and Hurts throws a pick to Tae Crowder, and they come away with zero points. Halftime: 3-0 NYG.

Quarter 3: Starting the second half, Miles Sanders breaks free for a twenty-five yard run. They go for it on fourth down, and fail to convert. Off a screen, running back Devontae Booker gets down inside the thirty. Taking advantage of the given field position by Philly, Jones finds Chris Myarick for the touchdown. 10-0 NYG. Hurts takes a deep shot on first down, and into double coverage, as it is picked off by safety Xavier McKinney for Hurts’ third pick in the game. A couple runs by Hurts gets them deeper into New York territory. Boston Scott, who has been known to dominate the Giants, then sets up a short first & goal for the offense.

Quarter 4: Scott runs right up the gut, and into the endzone for Philly’s first points of the game. 10-7 NYG. Jones hits Golladay on back-to-back big gains. Gano hits a thirty-nine yarder to go up 13-7. With a little over two minutes left, Hurts and the Eagles’ offense start to drive downfield. They run with Scott, but he gets the ball punched out and Julian Love catches it for the turnover. The G-men are able to take some time off the clock, but Philly gets the ball back with a little over a minute to play. Hurts goes deep, wanting it all, and Reagor cannot make the would be game-winning catch. With one last shot on fourth & ten from just inside the thirty, Hurts fires a pass to Reagor, and it goes threw his hands and incomplete. The New York Giants win the ballgame 13-7.

The Eagles now sit at 5-7 and third in the NFC East.

Looking at how the outcomes of other games played out, with a win over the Giants, the Eagles would’ve sprung into the seventh seed spot in the playoff picture, but they struggled to move the ball against a solidifying Giants defense, resulting in the loss.

Jalen Hurts, who rushed for three touchdowns last week’s game against the Saints, this week swapped that for three interceptions. He also only completed fourteen passes on thirty-one pass attempts for 129 yards. His seventy-seven rushing yards led the team. The receiving game was abysmal as Kenny Gainwell led in yards with thirty-two. The Philly defense was the team’s lone bright spot from the game, as the New York offense mustered only thirteen total points even with the four turnovers.

The G-men still sit in last in the NFC East, but the upset win over Philly could prove to make an impact down the line. With Freddie Kitchens taking over play-calling duties as NYG’s OC Jason Garrett was fired after their loss to Tampa, the offense did not look much better. Daniel Jones completed nineteen passes on thirty attempts for 202 yards and one TD. Saquon Barkley made his return with forty rushing yards, and Kenny Golladay had fifty passing yards. Its no secret both teams’ offenses were massively non-existent, but just like the Eagles, the Giants’ defense was outstanding as they pick off Hurts three times, and forced a fumble.

The Eagles still have an overall easy schedule to finish out the season, but since they faltered against the Giants, Washington, whose on a three-game win streak, has taken over second place in the division at 5-6, and the 7th playoff spot in the NFC. Philly still has to face Washington twice, and those games should have major playoff implications with both teams currently in the mix. But for right now, the Eagles will head back to Metlife to play the Jets, another potentially easy win, but after this past week, anything could happen.