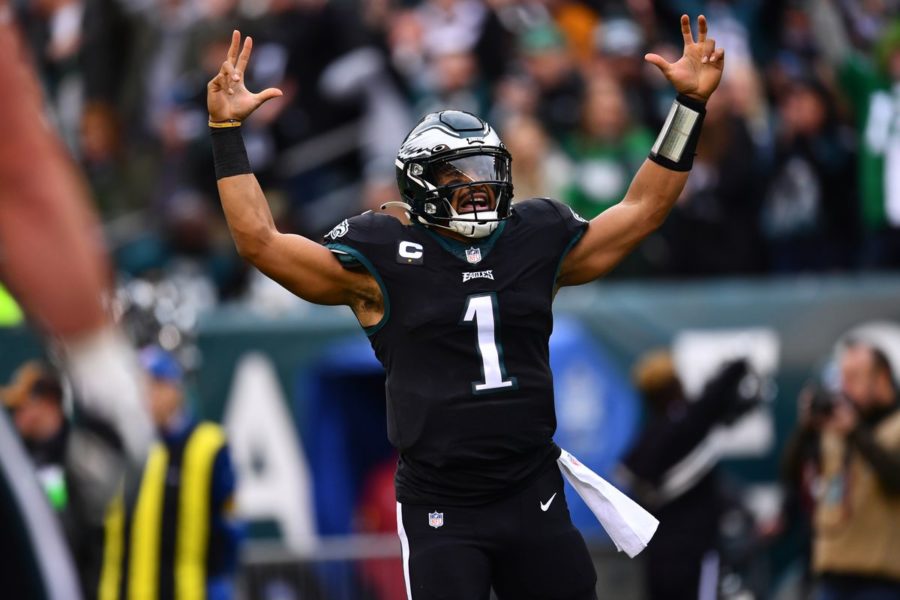 Jalen Hurts and the rushing game lead the Philadelphia Eagles to a 40-29 upset win over the New Orleans Saints to move into the playoff hunt.

Jalen Hurts’ has three TD performance in win over the Saints

Back-to-back wins for the Philadelphia Eagles.

After handling the Denver Broncos the week prior, they hosted the New Orleans Saints who lost a close one last week against the Titans, and were still playing very well despite losing Jameis Winston for the season a few weeks back.

This week the Saints showed once again they are still mighty inconsistent as their defense was not ready for the Eagles’ rushing attack which has carried that offense in recent games, and in a matchup that could heavily affect the NFC Wild Card race.

Quarter 1: Both offenses come up empty-handed on their opening drives. Targeting tight end Adam Trautman, QB Trevor Siemian’s pass gets intercepted by linebacker T.J. Edwards. Dallas Goedert, who has recently been extended by the Eagles, catches a pass and goes down just short of the goaline. Hurts QB sneaks the ball and gets in. 7-0 PHI. From the forty-two, Miles Sanders, who is back from IR, runs down to the Saints’ thirty with some good blocking. Hurts fakes the handoff and runs down to about the five. On third & goal, with no one out right, Hurts takes off in that direction, and breaks the plain before going out of bounds for the TD. 14-0 PHI. Saints’ running back Mark Ingram II, who recently reunited with the team, picks up a first down.

Quarter 2: That drive ends, but the defense forces a Sanders’ fumble, and they recover it as well. On a long third & goal, Siemian buys time, and throws a dart to Trautman for the score. 14-7 PHI. Hurts finds Devonta Smith running across the field, and with some moves, Smith gets inside the thirty-five. A fifty yard field goal attempt by Elliott is good. 17-7 PHI. With the ball back, Jordan Howard has a nice run up the middle. Howard then picks up two more first downs continuously pounding his way down the middle. Goedert makes an impressive catch to get the offense inside the redzone. A defensive PI forces the Eagles to settle for a thirty-seven yard field goal. 20-7 PHI. A screen to Trautman gets the Saints close to midfield, but Philly’s D stops them on the set of downs after that. Trying to make something happen before Halftime, Siemian gets picked off by Darius Slay, who returns it for six. Slay’s third TD in the past three games. 27-7 PHI.

Quarter 3: Uneventful first drives for the two offenses. A nice screen play for Goedert gets him inside the twenty-six. Smith gets a nice screen play as well. Hurts is sacked on third & goal and Elliott kicks a thirty-three yarder. 30-7 PHI. Needing points bad, Ingram fumbles the ball, and Edwards recovers it getting the turnover. Hurts is sacked on the fake on third and Elliott makes a forty-seven yard field goal. 33-7 PHI. Ingram breaks free for a big run into Eagle territory.

Quarter 4: Siemian connects with wide receiver Marquez Callaway for a TD. The two-point conversion fails. 33-13 PHI. They get the ball back quick and Tre’Quan Smith catches a pass into the redzone. Siemian takes off on second & long, and runs in for the touchdown. Kicker Brett Maher, in for the injured Wil Lutz, misses the extra point. 33-19 PHI. Eagles get nowhere and the Saints drive again, and Trautman makes the grab for a first down. Eagles’ defense holds, and Maher kicks a twenty-eight yarder. 33-22 PHI. Looking to shut down the Saints comeback attempt, the Eagles drive and just from outside the twenty, Hurts keeps the ball, cuts in, and rushes into the endzone for six. 40-22 PHI. Saints drive and wide receiver Lil’ Jordan Humphrey makes the catch in the back corner of the endzone. 40-29. PHI. Goedert recovers the Saints’ onside kick attempt ending the game winning 40-29.

The Eagles are now 5-6 and still hold second place in the NFC East. Ever since they switched to the run game as their offensive identity, they’ve been a much more competitive team, and are now on a two game winning streak. Hurts, Sanders, Howard, and Scott have all been much more efficient on the ground since the transition.

Jalen Hurts completed thirteen of twenty-four pass attempts for 147 yards, but his day was more on the ground, rushing for sixty-nine yards and three TDs. Miles Sanders led with ninety-four rushing yards, and Dallas Goedert led the team with sixty-two receiving yards. The defense has been better as well, and has had a hand in putting up points thanks to Darius Slay who scored a pick-6 in the game.

The Saints now fall to .500 at 5-5. They currently hold an NFC Wild Card spot, but loses their last two games puts them at more risk of falling out of their playoff spot. Not having star running back Alvin Kamara the past two games has not done them any favors either.

Trevor Siemian completed twenty-two of forty passes for 214 yards, and three TDs t0 two picks. Mark Ingram led the team with eighty-eight rushing yards, and Tre’Quan Smith had sixty-four receiving yards on the day. The Saints have been one of the best run-stopping defenses this year but struggled mightily to contain Hurts and the Philly rushing offense on Sunday.

Finally playing in another divisional game next week, the Eagles face the New York Giants. In regards to divisional standings, Dallas lost to the Chiefs, but still have the division crown, and Washington won again, this time beating Carolina, and still trail the Eagles by one as the NFC East looks to be getting more competitive.

The main concern for Philly is if teams start to adjust and begin to stop their rushing attack, will they be able to rely on Hurts’ arm to get the job done? But as of right now, they are trending upwards.