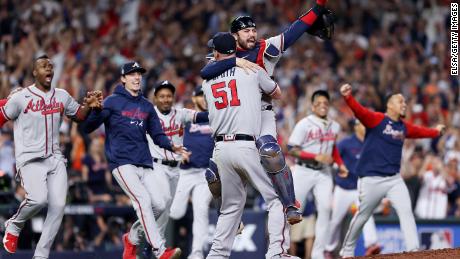 1995 was the last time the Atlanta Braves won a World Series title in which they bested the Cleveland Indians. Ever since, it has been a rough go for the Braves, as well as other Atlanta sports teams, as they have become known for choking games by blowing big leads.

Some of those choked games include, the 28-3 blown lead by the Atlanta Falcons in Super Bowl LI, and Georgia Bulldogs blown 3rd quarter 20-7 lead against Alabama Crimson Tide.

The Braves have had their fair share of blown leads in the 21st century as well, but this time around, they were one of the underdog teams that just barely made the postseason, and they took advantage of it, and went all the way.

Kicking off with Game 1, the Braves took the early lead in the series winning 6-2 over the Astros. Right off the bat, Jorge Soler hit a home run for Atlanta. He finished the game with one run and two RBIs. Adam Duvall also had two RBIs. Atlanta had twelve successful hits in the game, and were able to get six of them home, while Houston had eight hits, but only mustered two runs.

In Game 2, the script flipped. This time it was Houston’s turn to dominate. Travis d’Arnaud was the only Brave to score in Game 2, with the team having as many hits (7) as the Astros scored runs. Jose Altuve, scored two runs, and had an RBI, as the team got all but two of their nine hits home. The Astros now tie the Braves at 1-1 on the series.

This time, in Game 3, no one solely dominated. The pitching and defenses from both team came to play this time around instead. Houston got shut out, scoring zero runs, and only getting two successful hits by Alex Bregman and Aledmys Diaz.  Atlanta had their pair of runs scored by Eddie Rosario and Travis d’Arnaud. The Braves regain the series lead now at 2-1.

Game 4: Now back-to-back wins for the Braves in the World Series. A close lower scoring game in which they edged out the win 3-2, scoring two runs in the seventh inning to take the lead. Rosario scored a run again. Austin Riley had two hits and an RBI on the night. Soler and Dansby Swanson scored the two other runs. Altuve was the lone Astro to score as he got the pair of runs for the team. Atlanta now takes a 3-1 lead, only needing one more win to win it all.

The Braves did not find what they were looking for in Game 5. The Astros came into the game saying, we’re not done yet, as the offense came alive putting up nine runs on the Braves, beating them 9-5. Altuve, Kyle Tucker, and Yuli Gurriel all scored two runs apiece. Michael Brantley, Carlos Correa, and Bregman all had runs as well in assisting Houston to their second win of the series. Freeman, Albies, Riley, Rosario, and Duvall all scored for Atlanta, but got blatantly outscored in their first chance to clinch the series. They lead 3-2.

Game 6: Back down in Houston. Top of the first, Kyle Tucker makes a diving catch to get Rosario out. Brantley hits a grounder to Freeman, who then tosses the ball to Max Fried, the Braves starting pitcher.

Fried tries to place his left foot on first as he catches the ball but just misses it, and Brantley ends up stepping on his ankle and never touches the base. He is eventually ruled out.

Top of the third, Jorge Soler lands the first punch as he hits a home run, sending himself and two more runners home. Braves lead 3-0.

Braves get a double play, and then get the third out right after in the top of the fourth.

Dansby Swanson hits a bomb into the stands for the Braves second homer of the night. Two runners score, and Atlanta leads 5-0 top of the fifth. Freeman hits one deep off the wall, and sends Soler home. 6-0 Braves.

After six innings, Fried is done for the night, allowing no runs, and overall was unstoppable on the mound. Back at bat, this time, Freeman gets the home run. 7-0 Braves.

As the bottom of the ninth inning rolls around, The Braves get the third and final out of the ball game on Gurriel, and the Atlanta Braves, in six games, beat the Houston Astros 7-0 to become world champions, and win the World Series 4-2.

A true underdog story, as the Atlanta Braves win the World Series. Halfway through the regular season, they had a losing record. They barely snuck into the playoffs, and some teams with better records in the American League, missed the postseason. The Braves also overcame adversity as they lost their starting pitcher, Charlie Morton, suffered a broken leg in Game 1, and had a handful of significant losses throughout the season. They now hold the title of World Series Champions.