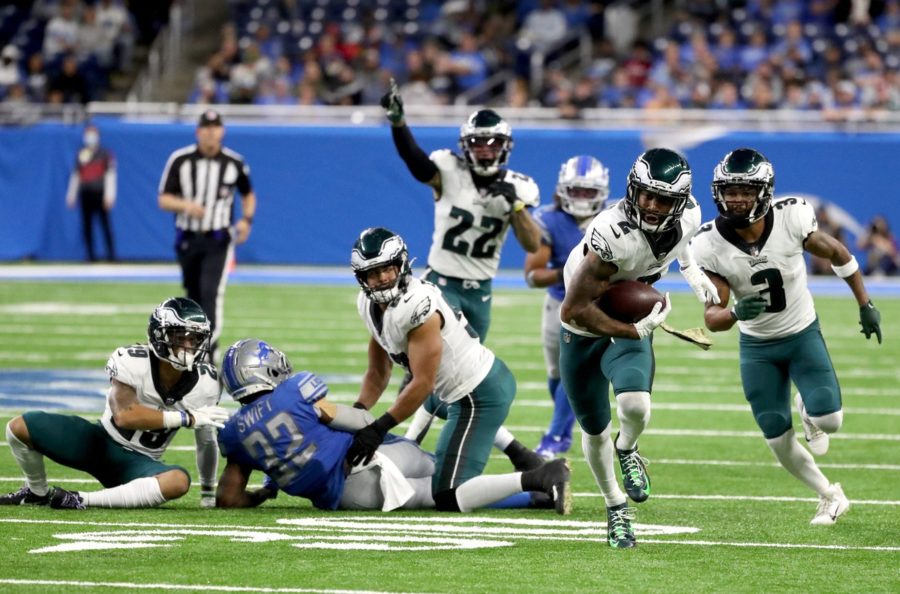 Good things happen when your team runs the ball efficiently and consistently.

The Eagles had a lot of doubters that they would be capable of beating the 0-7 Detroit Lions as the Lions have been quite literally the best 0-7 team ever. They most recently put up a close game against the Matthew Stafford led Los Angeles Rams, and playing a below average Eagles team seemed to be setting Dan Campbell’s Lions up for a victory.

That however was not the case as Philly tormented Detroit all game long.

Quarter 1: Star tight end, TJ Hockenson, catches a pass that takes Detroit across the fifty. After that, they punt, and down the ball inside the five. The Eagles get nowhere on the drive and they punt back to Detroit who is able to return the ball into Eagle territory. Jared Goff gets sacked by Josh Sweat on second down. They attempt a forty-seven yard field goal, which Austin Seibert misses left. With Miles Sanders on short-term IR, the Eagles get creative with their run game with Jalen Reagor running for a pair of first downs. Hurts then hits Quez Watkins inside the five yard-line. On third & goal, Boston Scott breaks into the endzone for the touchdown. 7-0 PHI. On third down, Sweat gets to Goff again for his second sack.

Quarter 2: A tipped pass leads to a Jake Elliott forty-three yard field goal. 10-7 PHI. Another sack on Goff, this time by Derek Barnett. Scott turns the corner and picks up about twenty yards on the ground. Hurts tosses the ball to Kenny Gainwell, who then throws it back to Hurts, who then sends it to Dallas Goedert down at the thirty-five. Running the ball into the endzone this time is Jordan Howard. 17-0 PHI. With a little over a minute left in the half, Goff hits Hockenson for a third down conversion. Running back Godwin Igwebuike, then catches a pass from Goff, and gets inside field goal range. D’Andre Swift is tackled short of the line to gain on third & one, and the Lions go for it on fourth & inches and attempt to pass the ball, resulting in Goff getting sacked by Williams. Eagles led 17-0 at the half.

Quarter 3: On a long third down, Hurts evades the danger at the endzone, and runs for a first down and more, reaching the thirty. Hurts shows Goedert some love before handing the ball off to Scott who scores his second TD of the day. 24-0 PHI. Goff connects with rookie wide receiver Amon-Ra St. Brown from the twenty-five, and St. Brown runs down into enemy territory. The drive comes up empty. Another third & long conversion is made by Philly, as Devonta Smith stays in bounds as he makes the catch along the sideline. Howard breaks into the endzone for his second score of the day. 31-0 PHI. A pass caught by D’Andre Swift is fumbled, and the former Lion, Darius Slay Jr, scopes up the loose ball and takes it back for a revenge touchdown. 38-0 PHI.

Quarter 4: Well into the final quarter, Elliott kicks a twenty-five yarder. 41-0 PHI. Rookie running back Jermar Jefferson, finally puts Detroit on the board, scoring the first touchdown of his career. The two-point conversion attempt fails. 41-6 PHI. The Lions attempt an onside kick, which they were successful with last week, but this time, the opposing special teams recovers the ball. After that, Elliott kicks a forty-one yard field goal. Final score: 44-6 Eagles over Lions.

While putting up forty+ points in any given game is impressive, beating the Lions is nothing to necessarily get super hyped up about. It was a good win, but Detroit has zero of those this season. The real thing to look at is if this is a sign, and if the Eagles can carry over this performance into future games.

Detroit has garnered some people’s respect because of the heart the team puts into games despite being winless, but this game certainly lost them some of that.

On the Eagles side, Jalen Hurts the number of points put up, only completed nine passes on fourteen attempts for just 103 yards. He did lead the team in rushing with seventy-one yards. Dallas Goedert led with seventy-two receiving yards. The defense was very good, sacking Goff six times, as well as the fumble recovery TD by Slay.

In a way it’s interesting how the Eagles got away from using Hurts so much, focused on the run game more, and won, and by a lot. This does lead to more questions on of Hurts is the answer at QB for the birds. Next week is a tough matchup against the Justin Hebert led Chargers, but they are one of the worst run defense teams this year, so if Sirianni sticks to this weeks’ successful strategy, the Eagles could potentially sneak out an upset victory.