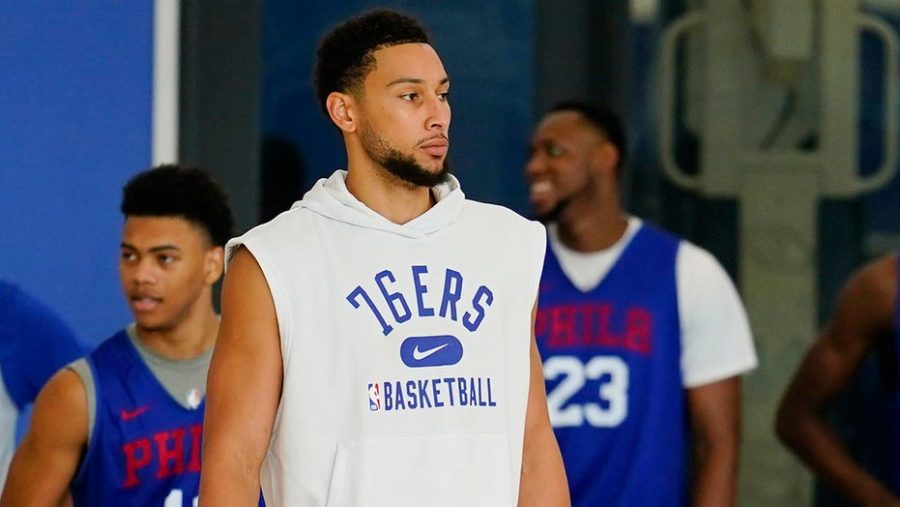 Ben Simmons is kicked out of practice. “I don’t care about that man,” says star teammate Joel Embiid when addressing the issues between the team and Simmons.

As the NBA season kicked off in late October, the 76ers look to take the next step this season.

After an ugly playoff exit at the hands of the underdog Atlanta Hawks, the Sixers need to rebound back from the loss. Ben Simmons had become a liability and was a big reason why the team struggled, and the entire offseason news surrounding the team had to mainly do with Simmons on if they would look to trade him.

Simmons also showed up to a recent team practice in improper wear and his phone in his pocket. Following that, he was then fined by the team. He was also previously fined $360,000 for not showing up to one of the teams’ preseason games. The standout between Simmons and the Sixers continues, and the outcome is very unclear.

Sixers fan hope that this situation is not a huge distraction for the teams’ primary goal of getting to the finals this time around.

The Sixers faced the New Orlean Pelicans in their season opener.

The Pelicans were already at a disadvantage being without star power forward and the number one overall pick in the 2019 NBA draft, Zion Williamson, who suffered a broken foot over the summer and will undergo scans this week to decide if surgery is the next step for his recovery.

The Sixers on the other hand, despite the Simmons delema, still possess a team that featured Joel Embiid, Tobias Harris, and Seth Curry. That advantage led to a twenty point victory for the Sixers with four different Sixers players scoring at least twenty points each.

Game two: Philadelphia fell to the Brooklyn Nets whose roster featured players such as Kevin Durant and James Harden. The team also includes Kyrie Irving, but his current refusal to get the Covid-19 vaccine has prevented him from playing. There has even been talks about a Irving, Simmons trade between the two teams. Despite the Nets being down of one their best players, they were still able to hold off the 76ers by edging out a five point win 114-109.

For game three, the Sixers traveled to Oklahoma City to take on the Thunder who was searching for their first win of the season, as they dropped their first two matchups. Needless to say, the Sixers took care of business winning the game 115-103. Curry led the team in points scored with twenty-eight. Thunder guard, Shai Gilgeous-Alexander had twenty-nine points to his name. The 76ers improved back to a winning record at 2-1.

Next up were the New York Knicks, who held Philly to under 100 points in the game as they beat them 112-99. The big difference in the game appeared to be the second quarter in which the Knicks put up thirty-nine points, while the Sixers only mustered sixteen. The 76ers now find themselves back at a .500 record.]

The Sixers’ most recent game was at home against the winless Detroit Pistons. Now like most Detroit teams these days, the Pistons have not been very good, but the Sixers almost slipped up in the fourth, allowing the Pistons to put up thirty-five points, in an almost successful comeback attempt. Fortunately, the Sixers still won by eight with a final score of 110-102. Embiid carried the team in this game, putting up thirty points sole.

Philadelphia currently sits at a 3-2 record after the first five games of the season. Their winning and losing streaks have not gone over one game, as they keep exchanging wins and loses every other game. Their identity is so far unknown for the season, and the Ben Simmons issue does not help them find one. Next up, are the Atlanta Hawks who sit at 3-2. The very team, led by Trae Young, who eliminated the Sixers in the postseason last year. This could be a potential mini revenge game for Philly, or they will continue their win-loss streak, and search for their identity.