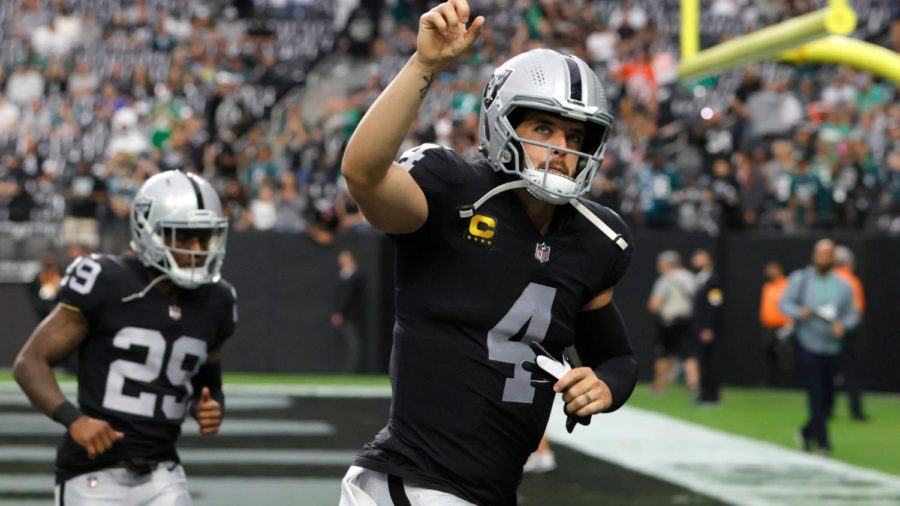 Despite playing a team with an interim head coach, the Eagles fall to the Las Vegas Raiders

There was probably some hope in Philly that their birds would lead them to a victory this week, and can you blame them?

They faced the Las Vegas Raiders, who just two week ago, had their head coach, Jon Gruden, resign after offensive emails between him and Washington’s former general manager, Bruce Allen, were leaked, among other things, forcing the man who the Raiders had handed a decade long $100 million contract, to leave the organization.

Furthermore, tight end Darren Waller, who is a top three tight end in the league, and debatably the best player on the Raiders, was a game-time decision who was ultimately ruled out of the game.

Despite the key holes on Las Vegas, the Eagles were unable to contain Derek Carr and the Raiders’ offense as the birds fell in Sin City.

Quarter 1: On their first drive of the game, the Eagles for once, actually implement the run game, by running the ball multiple times with Miles Sanders. A short pass to rookie Kenny Gainwell gets the Eagles their first points of the game. 7-0 PHI. A third & fifteen situation arises for Carr’s offense, but he responds by sending one deep to wide receiver Zay Jones who catches it along the sideline. In another third down situation, Carr, while getting chased, tries to pass to Jalen Richard, but it goes off his hand, and is intercepted by Avonte Maddox. Yannick Ngakoue bats down a pass attempt by Jalen Hurts, forcing a punt following the takeaway.

Quarter 2: Carr fires a pass, and tight end Foster Moreau makes a great catch over a Eagle defender, scoring a touchdown on National Tight End Day. 7-7. Hurts QB sneaks the ball on fourth & short and moves-the-chains. Ngakoue pressures Hurts, and as Hurts runs away, he throws, and Devonta Smith, makes a nice toe-tapping catch, as he came back across the field to help his QB. On third down, this time, Ngakoue, among others, get to Hurts for the sack. Carr leads the Raiders down the field, before Josh Jacobs caps off the drive, by rushing in for a touchdown. 14-7 LV. Gainwell fumbles the ball, and the Raiders’ defense recovers. Before the half ends, Daniel Carlson puts a twenty-eight yard field goal through the uprights putting Las Vegas up 17-7.

Quarter 3: On the second half kickoff, the Eagles’ special teams tries a surprise onside kick, but the Raiders recover the ball, resulting in great field position. Another efficient drive by the Raiders ends in a handoff to Kenyan Drake for the score. 24-7 LV. After an almost disastrous drive attempt by Philly, the Raiders respond by once again driving down the field with a big pass from Carr to Bryan Edwards getting inside the ten. A third & goal pass to Hunter Renfrow is short of the goalline. Going for it on fourth & goal now, Carr quick passes to Edwards on a slant scoring the TD. Carlson doinks the extra point but they still lead 30-7. Hurts throws on the run, and connects with Quez Watkins, who gets to the fifty. Needing to score touchdowns, Dallas Goedert gets the first down on fourth & ten. On third & goal, Hurts fumbles the snap and the Raiders recover the ball.

Quarter 4: In basically garbage time, down twenty-three points, the Eagles put together a nice drive, and Boston Scott gets the touchdown. 30-14 LV. Still not taking their foot off the gas, Carr floats a pass to the fullback Alec Ingold, who was wide open. Carlson makes a thirty-nine yard field goal. 33-14 LV. Getting hit right as he throws, Hurts is able to get the ball to Jalen Reagor, who snags it in front of three Raiders, turns, and gets into the endzone. Goedert hauls in the two-point conversion pass cutting the Raiders’ lead to eleven. 33-22 LV. Ngakoue gets another sack on Hurts, and Jefferson gets to Hurts on fourth down, and his pass sails incomplete. Raiders gets the ball back, and take the knee to end the game. Raiders win 33-22.

It continues to be up in the air whether Jalen Hurts can be the longtime starting QB for the Eagles.

Hurts completed eighteen of thirty-four passes for 236 yards and two TDs, most of which came in the fourth quarter when the team had already dug themselves into a deep hole. He also finished as the team’s leading rusher with sixty-one yards. Sanders was injured during the game and was carted to the locker room. Goedert led in receiving yards with seventy.

The defense had no answer for Derek Carr and the Raiders’ offense, outside of Alex Singleton being one of the league’s best tacklers.

Derek Carr has been one of the more surprisingly great QBs as he completed an impressive thirty-one of thirty-four pass attempts for 323 yards, and two TDs to one INT. Drake put up sixty-nine ground yards, and Moreau had sixty receiving yards.

Las Vegas heads into their bye week on a high note as they continue impressive play with their interim head coach, hoping for a playoff berth.

As for Philly, they fall to 2-5 as they take on the 0-7 Detroit Lions next week. A game they should win, but Dan Campbell has the Lion playing tough, so anything could happen, though Philly would prefer to avoid the upset.