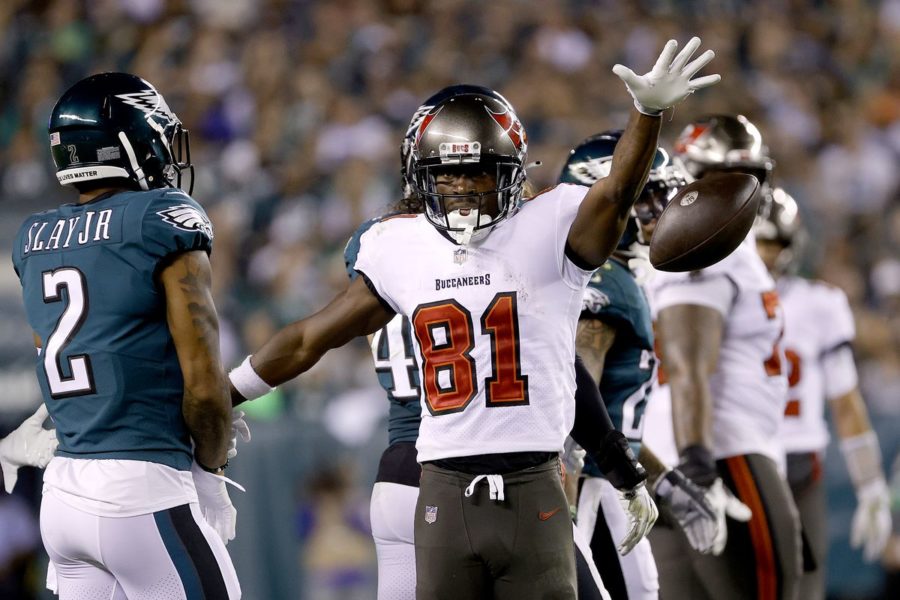 Eagles’ comeback attempt fails, and lose to the Buccaneers on Thursday Night Football

First off, I would like to thank Bucs running back Leonard Fournette for balling out last night and getting me twenty-seven fantasy points.

After pulling off the upset last week against the Carolina Panthers, Philly could not bring down the defending Super Bowl champion Tampa Bay Buccaneers.

Despite Tampa’s banged up secondary, the Eagles struggled to pass the ball with a combination of poor play-calling by Nick Sirianni, and below average QB play from Jalen Hurts. And with their defense having to try and prevent the Bucs’ offense that features a plethora of weapons with Tom Brady at the helm, the Eagles were unable to put it all together soon enough and are defeated at the hands of Brady.

Quarter 1: Tom Brady puts together a nice opening drive, taking advantage of all the weapons he has, and as they edged close to the endzone, he finds tight end OJ Howard, who is getting more playing time with Rob Gronkowski out once again, in the back of the endzone for the touchdown. 7-0 TB. Hurts, running out right, throws before crossing the sideline, and the pass is tipped by Devin White, but somehow Quez Watkins is able to haul in the ball for the first down. Hurts then airs one deep looking for Jalen Reagor. The pass is incomplete but a defensive pass interference is called on Jamel Dean, resulting in the Eagles getting the ball at the five yard line. Faking the hand off to Miles Sanders, Hurts keeps, and hits a wide open Zach Ertz for the score. 7-7. Leonard Fournette leads the ground attack, as he keeps driving through Eagle defenders. The drive is capped off with a pass from Brady to Antonio Brown, who dives across the plain for the touchdown. 14-7 TB.

Quarter 2: After forcing an Eagles’ punt, Brady targeting tight end Cameron Brate, the pass is tipped and looks to be intercepted by Marcus Epps, but after further review of the play, the ruling is overturned as the ball did make contact with the ground. Hurts airs another pass out, looking for Watkins, but is picked off by Dean. A screenplay to AB almost sets him loose, but he still gets the first down. Fournette catches a pass, breaks a tackle, and picks up some extra yardage after crossing the first down marker as he continues to be a force on the field. Now just outside the goalline, Fournette plows through the lines and gets the touchdown. 21-7 TB. Brady decides to take a shot as the half nears its end, and is picked off by safety Anthony Harris, who tosses it to Darius Slay Jr, before he gets taken down at around their own thirty. Halftime score: Bucs lead 21-7.

Quarter 3: A quick three & out to start the second half for Philly. Fournette picks up the first down on a short third down, and keeps driving as two Eagles try to take him down and eventually do so at the fifty. The drive ends as Fournette steps into the endzone for his second TD of the night. 28-7 TB. Once again Hurts airs out a deep pass targeting Reagor, which ultimately falls incomplete, but Mike Edwards is flagged for DPI, and the Eagles get the ball just inside the Bucs’ twenty-five. On third & three, Sanders receives a hand off and gets the first down. The fans love to see it, as Philly has rarely utilized their running backs, especially Sanders, in the run game. Going for it on fourth & three, down by twenty-one, Hurts, takes the ball himself, and runs in scoring the touchdown. 28-14 TB.

Quarter 4: Hurts on second & long, throws on the run, and Watkins makes a great toe drag catch. After a mostly quiet night, Hurts hits Devonta Smith into Tampa territory. Jake Elliott misses to the right on a forty-six yard field goal try. Howard gets tripped up, and falls short of a first down. Eagles get the ball back. Another rare Sanders sighting as he picks up about twenty-five yards. Back-to-back runs for Sanders now as he stiff arms a man, and gets down to the ten. Hurts takes the ball himself again into the endzone. They go for two, and Watkins hauls in the pass. 28-22 TB. A taunting penalty was called on Genard Avery, who got in the face of Leonard Fournette. Brady, on the run, throws a dart to AB. To end the game, Brady QB sneaks it on third & one for the first down, clinching there victory. Final score: 28-22 Tampa Bay.

Both the offense and defense came alive way too late in the game to rally back to beat Tampa. Things need to change in the city of brotherly love. First off, head coach Nick Sirianni needs to either change or give up play calling duties. His entire playbook is either run the ball with Hurts, or chuck the pigskin fifty yards deep and hope for a catch or DPI. They need to get more creative, and also simply run the ball more with their actual running back.

You can’t blame it all on Sirianni though. Hurts need to step up his play as well. Granted the play calling does him no good, but he seems to run as soon as the ball is snapped, and struggled with accuracy against a poor and injured Tampa secondary. His completion percentage was below 50%, passing for 115 yards, and had one TD to one INT, plus two rushing TDs. Miles Sanders was finally the leading rusher with fifty-six yards. Quez Watkins had forty-four receiving yards. It’s also worth mentioning that Brady was sacked exactly zero times last night.

Staying on the topic of Brady, he completed thirty-four of forty-two pass attempts for 297 yards, and two TDs to one INT. Leonard Fournette was the star of the game with 127 total yards and two TDs. Antonio Brown led in receiving yards with ninety-three. Shaq Barrett was the standout defensive player for Tampa as he was all over the field chasing after Hurts, and pressuring him all night.

Tampa improves to a 5-1 record, while Philly falls to 2-4. Next week they face the Las Vegas Raiders who have been up and down this season, more recently down with the resignation of head coach Jon Gruden. On Philly’s side, they just traded away longtime tight end Zach Ertz to the Arizona Cardinals. Despite the loss, Philly should look to take advantage of the Raiders situation and try to get back in the win column.