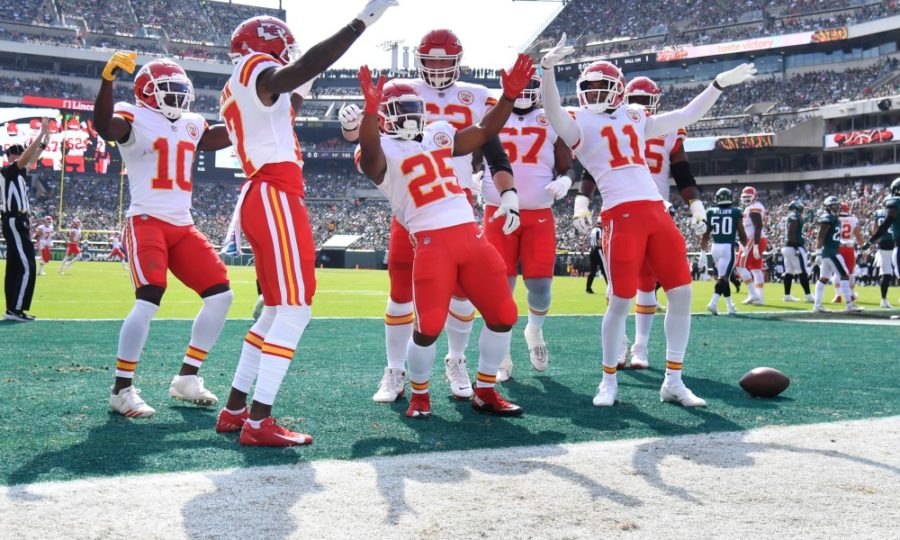 Chiefs players celebrate in the endzone after a touchdown by Darrell Williams in a 42-30 win over the Eagles.

Another week, another 40+ points allowed by the defense.

The Eagles faced the 1-2 Kansas City Chiefs. Don’t let their record fool you, they are still a very very good football team. Rebounding from a rough start, going 0-2 in their last two games, they came into Philly hungry for a W, and that is exactly what they got, outscoring the Eagles 42-30, as Jalen Hurts and the offense could not keep up with KC.

Quarter 1: Philly had possession first, and against a struggling KC defense, drives down the field, as Hurts hits Devonta Smith for a twenty-two yard play. Scrambling, and eventually breaking out of the pocket, Hurts falls short of the first down, so they bring Jake Elliott out to make the twenty-nine yard field goal. PHI leads 3-0 early. Now looking at the Eagles’ defense, they have been off and on this season so far, and have most recently been off as Mahomes drives the offense into Eagle territory, and throwing a bullet to speedster Tyreek Hill, who outruns everyone, and turns the corner diving for the right pylon, coming up just short inside the one-yard line. Mahomes fakes the hand-off to running back Clyde Edwards-Helaire, Helaire cuts back, and Mahomes pitches the ball forward to him, and CEH gets the TD. 7-3 KC. Hurts throws a quick pass to Kenny Gainwell, and he plows ahead for the first down. Two plays to Jalen Reagor and then Quez Watkins get back-to-back first downs. Miles Sanders is the next Eagle to get a first down. Going for it on fourth & two, Hurts gets immediate pressure but is still successful in getting it to Gainwell to move-the-chains. A screen to Gainwell gets him inside the five, but the ball appears to have come out. The refs rule him down prior, but at one angle it does show the ball out before Gainwell was down, so it was a fumble but the refs rule otherwise. Chiefs recovered the ball too so it would’ve been their ball. Eagles keep possession and Hurts hits Dallas Goedert for the score. PHI 10-7.

Quarter 2: Mahomes on third & long, runs out of the pocket and tightropes the sideline to pick up the first down. Byron Pringle hauls in a pass into Philly territory, which is followed up by a perfectly aired out pass from Mahomes to Tyreek Hill just outside the goal line on the right side. On third & goal, Mahomes finds Hill again, this time in the endzone. 14-10 KC. Hurts fakes the handoff and runs for the first. Getting hit right he releases the pass, Hurts gets the ball to Gainwell down to the thirty. Watkins speeds down to the eleven.  Hurts throws to an empty left side of the endzone, and Elliott makes the twenty-five yard field goal. KC 14-13. CEH gets a fifteen yard run, followed by a reverse to Mecole Hardman, who gets twenty-five yards before getting tripped up. Another good run by CEH eventually steps up another forward toss by Mahomes, this time to Jody Fortson for the TD. 21-13 KC. Hurts from inside their own five, throws on the run, and connects with Smith down around the fifty. Trying to get points before half, Hurts gets the ball knocked out of his hands, and chasing it backwards, Chris Jones attempts to pick it up, but fails and the Eagles recover it as the half expires. KC leads 21-13 at Halftime.

Quarter 3: The KC offense finds themselves in a third & long, and Mahomes makes the rare mistake and throws an interception to Eric Wilson. Hurts gets chased backwards on third & goal, and Elliott bangs in the twenty-four yard attempt, but offsides is called on the Chiefs so Nick Sirianni opts to go for the touchdown on fourth & goal, and longtime tight end Zach Ertz gets in, BUT another penalty is called, this time pass interference on the Eagles so they opt to kick the thirty-one yarder. PHI trails 16-21. The Chiefs drive, and Darrell Williams pounds into the endzone, for another Chief TD. 28-16 KC.

Quarter 4: Gainwell takes the hand-off straight into the endzone on third & goal. PHI trails 23-28. An efficient drive by Mahomes and the offense is topped off with a sidearm sling to Hill as he falls into the endzone. KC 35-23. Hurts finds Ertz, and drops it in for him along the left sideline. He then takes a shot toward the endzone, and drops in a dime to Smith, but Smith is flagged for illegal touching, taking away the TD. With under five minutes to go, the Eagles fail to convert a desperation fourth down conversion, and just to make sure the game is sealed for them, Mahomes, off his back foot, under pressure, bombs it to a wide open Hill, who walks into the endzone. 42-23 KC. In the final seconds of the game, Greg Ward Jr shortens the loss by catching a touchdown pass. Final score KC wins 42-30.

After a hot defensive start for the Eagles, due issues such as penalties, injuries, and, quite honestly, a decline in performance, has quickly gone down hill after Week 2, as the Cowboys, and now the Chiefs have put up 40+ points on the unit. Granted the Chiefs’ offense is elite, but letting up 40+ points to any team is cause for concern.

The Chiefs, are happy about that, as this was a rebound game for them after a rough and shocking 1-2 start, and being last in the AFC West. They are now are back on the rise sitting at a 2-2 record. Mahomes had a game you except to see from him. He completed 25/30 passes for 278 yards, and an elite level of five TDs to a single pick. Edwards-Helaire had a good day on the ground with 102 total rushing yards averaging 7.3 yards per carry, and he did not fumble once. Tyreek Hill went off after a quiet last two weeks, with 186 receiving yards and three TDs. Mike Danna, filling in for an injured Frank Clark had a good day with two sacks, but overall the KC defense has still been very bad, and disappointing, as it showed again in this game with Hurts having a great statistical day.

Speaking of Jalen Hurts against this Chiefs’ defense, he had a 67 completion percentage, passing for 387 yards and two TDs. He also led the team in rushing yards with forty-seven. Devonta Smith had a career day, as he racked up 122 receiving yards.

It has been hard to figure out who Jalen Hurts is as a quarterback. One week, he plays lights out, the next he struggles. While his team lost this week, he played well. But like said before, we don’t know what the Eagles have in Hurts just yet. They might want to know soon if they want any shot at the playoffs as they now fall to 1-3 on the season, tied with the Giants, who won their first game, for last in the NFC East, and the Cowboys and Washington winning their games as well.

The Eagles face the 3-1 Carolina Panthers next week, so it will be another test for the defense, and another chance to see if Hurts is the QB of the future.