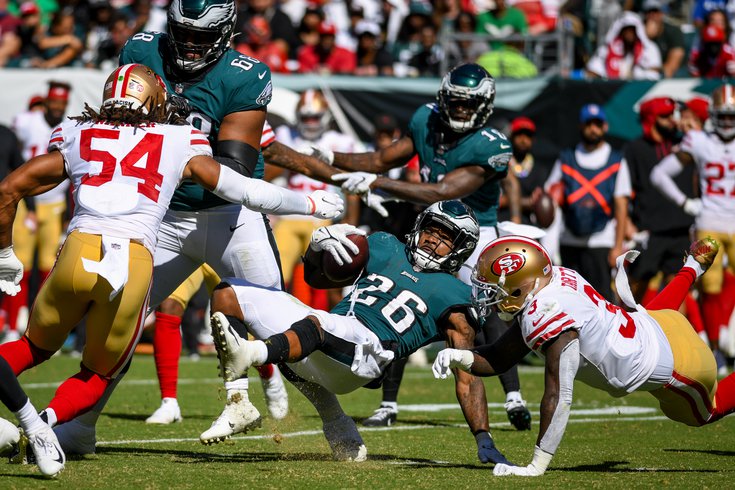 Miles Sanders getting taken down by safety Jaquiski Tartt in Eagles loss to the 49ers.

Game Recap: After Week 1 success, Eagles struggle and get handed their first loss

Time for Eagles’ fans to come back down to earth.

Riding high off of a season opener blowout win against the Atlanta Falcons, and Jalen Hurts’ jersey sales going through the roof,  Philly played their home opener against Jimmy Garoppolo and the San Francisco 49ers, and in an overall uneventful and low scoring affair, the Eagles found themselves getting handed their first loss of the 2021 season.

Quarter 1: Both teams’ first drives end in punts. Hurts’ pitched the ball to Miles Sanders, gets the first down and crosses midfield. Nearing the endzone on third down, Hurts gets pressured by pro bowl linebacker, Fred Warner and fails to connect with Devonta Smith. Jake Elliott hits a forty-five yard field goal, and Philly takes the lead 3-0. After running for a first down, and connecting with wide receiver Quez Watkins, Hurts airs one out, dropping into Jalen Reagor’s arms along the right sideline as he waltzes into the endzone for a supposed touchdown. The TD play is reviewed and Reagor appeared to have stepped out of bounds at around the five-yard line before coming back in bounds and catching the ball, taking away the touchdown.

Quarter 2: Niners hold them to a forty-seven yard field goal attempt, and Elliott’s kick is blocked. Tight end Dallas Goedert picks up the ball and tries to run for a first down but gets taken down, and it becomes San Fran’s ball. Eagles D, stuffs the Niners on a third & short, but Jimmy G quarterback sneaks it on fourth down to move the chains. A handoff to wide receiver Deebo Samuel, five yards behind the line of scrimmage on a long third down play, gets blown up, and the Niners are forced to punt again. Mitch Wishnowsky nails his punt, pinning the Eagles inside their five yard line. Despite the excellent punt, right away on first down, Hurts takes a risky shot from inside his endzone, and hits Watkins in stride, down the right sideline, and eventually gets tackled at the 49ers’ six-yard line. An absolute insane play by the QB and WR. But now despite that crazy play, the Eagles offense finds themselves in a fourth & goal situation which head coach Nick Sirianni elects to go for it. It’s a reverse play, as wide receiver Greg Ward Jr, the former college QB, looks to throw to Hurts in the endzone, but has no chance, and throws it away, and the reenactment of the Philly Special fails, as they turn the ball over on downs. With twenty-five seconds left in the half, Jimmy G throws down the seam, and hits Samuel, and he races by the secondary, and eventually goes out of bounds at the ten. A wide open wide receiver, Jauan Jennings takes the ball in for the touchdown. His first NFL catch puts the Niners on top right before half. SF 7-3.

Quarter 3: Hurts gets tackled from behind, the ball came out at some point during the tackle, and tight end Jack Stoll recovers it for Philly. With the Niners defense getting pressure, Hurts throws a deep pass for Smith in double coverage, and gets it knocked away by safety Jimmie Ward. Stopping San Fran, and with the ball back, Hurts continues to use his legs to pick up yet another first down. They soon after punt yet again. On third down, Jimmy G finds second year first round pick, wide receiver, Brandon Aiyuk for the first down, as he gets his first touch of the offense.

Quarter 4: Jimmy G finds Samuel for the first down into Philly territory. Running back JaMycal Hasty gets the pitch back, and he weaves around blockers and defenders, getting a nice run right outside the endzone. Jimmy G takes it in himself for San Frans’ seconds touchdown of the day. SF leads 14-3. Hurts runs away from the pass rush, and targets Smith, but it gets deflected and Sanders catches it for what would have been a crazy catch and first down, but it is ruled incomplete. After an eight yard scramble by Hurts, he has nowhere to escape the pocket as defensive end Nick Bosa, whose just coming off of a season ending ACL tear a year ago, gets the sack. Hasty bobbles the pitch from Garoppolo but it rolls out of bounds. Rookie running back Trey Sermon comes in for his first play of his NFL career, and he proceeds to fumble the ball on the hand off and cornerback Darius Slay recovers it. Sermon appears to be injured as well. Luckily for the Niners, a personal foul was called on the hit on Sermon, giving them the ball back. Robbie Gould makes a forty-six yard field goal and the Niners extend their lead 17-3. Hurts responds by running the ball down the field himself on two big plays, also getting helped by a personal foul on the Niners defense. Goedert catches a pass in traffic right after, and is brought down right outside the endzone. Hurts then QB sneaks it in for Philly’s first touchdown of the day. Going for the two-point conversion, Hurts pitches to rookie running back, Kenny Gainwell, and he plows his way into the endzone. PHI trails 11-17. Needing to get one first down to essentially put the game away, Garoppolo and the offense does just that with a QB sneak on third & one. The 49ers stay undefeated winning this one 17-11.

The Eagles had a much easier time passing the ball and racking up points against a poor Atlanta defense last week, and despite 49er injuries, and a lacking secondary, Hurts and the offense visibly struggled more facing this Niners D. Jalen Hurts completed just over fifty percent of his passes for 190 and no TDs or turnovers. He was also the teams’ leading rusher with eighty-two yards. Quez Watkins led in receiving with an impressive 117 yards on just two receptions. The defense overall performed well. holding teams to under twenty points in the first two weeks.

Jimmy G had a solid performance completing twenty-two passes on thirty attempts for 189 yards and a touchdown, plus a rushing TD as well. Running back Eli Mitchell led with just forty-two yards on the ground. Deebo Samuel had another good game with ninety-three receiving yards. The defense held up better this week with Bosa getting two sacks

Week 2 has been a big injury week in recent years. This year a handful of quarterbacks went down. None in this game, but the Eagles do fear that star defensive end, Brandon Graham, who had eight sacks in 2020, tore his ACL. That would be a huge blow to the team if true. Speaking of Brandons, on the other line, right guard Brandon Brooks is likely to go on IR with a pectoral injury. That’s another huge blow as he has been an elite protector for years, and he also missed all of last season.

As for the Niners, the injury bug keeps plaguing them. It hasn’t been as bad as last year, but they already came into the game without stand out corner Jason Verrett, who is out for the year, and running back Raheem Mostert who is getting season ending surgery. Running backs Eli Mitchell, Trey Sermon, and JaMycal Hasty all got various injuries during the game. Niners running backs just can’t seem to consistently stay healthy.

San Fran, while 2-0, is in a three way tie for first with the Rams and Cardinals, and the Seahawks are 1-1. The NFC  West looks to be a tough four way battle this year.

With that loss Philly falls to 1-1, and in a three way tie record wise with Washington and the Cowboys, though Washington is technically in first with Taylor Heinicke getting them a division win over the Giants. Speaking of division matchups, the Eagles face the Cowboys in primetime on Monday Night Football next week, as this game will look to really shake up the division standings in the NFC East.