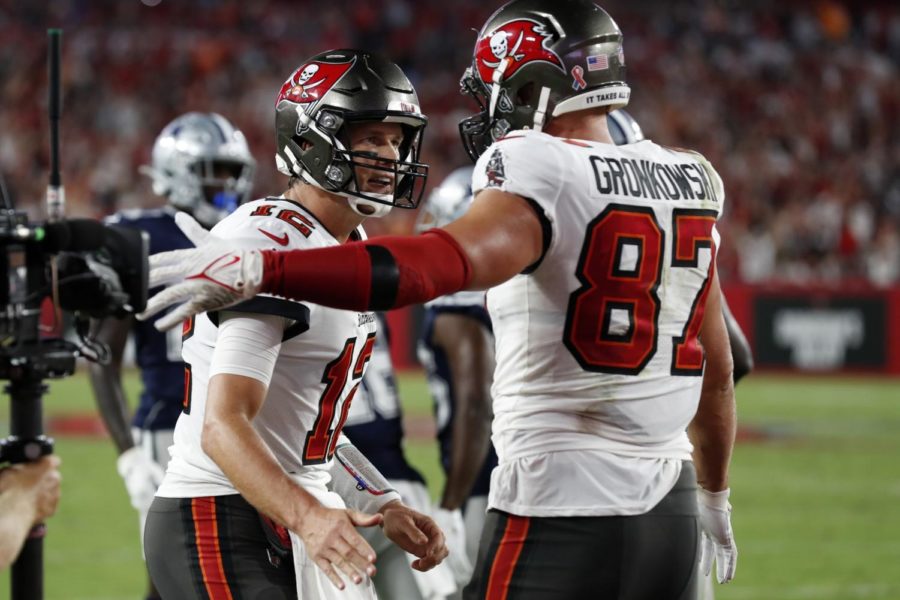 What a way to kick off the NFL 2021 season. The Buccaneers and Cowboys battled it out through the whole game, neither team letting up, and they kept going till the clock hit zeros.

One of the main stories going into the game was about Cowboys’ quarterback Dak Prescott. Dak suffered a gruesome, season-ending ankle injury in Week 5 of last season against the New York Giants. Since then, he has been rehabbing to get himself back to full health. He also injured his throwing shoulder during practice over the offseason, so there was some concern there as well. But he came out in the national spotlight, finally getting to have full stadiums again, with energy levels through the roof, and put on a spectacular performance to kick off his comeback season.

Dallas had a tough matchup to kick off their season, as Tom Brady and his Bucs were riding high after winning the Super Bowl, and bringing back all twenty-two of their starters. Brady making his 300th start of his career as well. The most by any player ever. The matchup featured two high flying offenses with top ten quarterbacks, strong running games, and elite, play-making receivers. The Cowboys were unfortunately missing all-pro guard Zach Martin, which made the Bucs’ ferocious front-7 look even deadlier. It really came down to who would stay hot offensively the longest, and pull out the victory.

Quarter 1: Tampa’s first drive of the season goes nowhere, and the Bucs punt. Their punter, Bradley Pinion kicks a beautiful ball, and it is spotted at the Dallas two-yard line. Dak, throwing from his own endzone, hits wide receiver Amari Cooper, who catches it at the twenty-nine yard line. He gets hits throwing on third & fifteen, and the pass falls incomplete, so Dallas punts their first drive of the season away. Brady from the fifteen hits long time tight end Rob Gronkowski down the middle of the field to the forty. Brady then throws a beautifully arched pass to wide receiver Antonio Brown, who joined the team mid-year last year, hauls it in along the sideline. Inside the redzone, Brady fakes the handoff to running back Leonard Fournette, and connects with wide receiver Chris Godwin in the middle of the endzone for the first touchdown of the season. Tampa Bay takes the first lead up 7-0.  Dak leads the offense down field with multiple passes to Michael Gallup, the third wide receiver on the team. Tampa brings the blitz on second down, but Dak calmly drops a dime to second year wide receiver CeeDee Lamb who hits the pylon, getting in, scoring Dallas’ first touchdown of the year. Game tied 7-7. On the defensive side, Bucs’ cornerback, Sean Murphy-Bunting got hurt on the play as him and safety Antoine Winfield Jr both tried to prevent Lamb for scoring, and Murphy-Bunting landed on his elbow, and would be out for the remainder of the game. Brady connects with AB once again, this time down the middle and crossing the fifty.

Quarter 2: Dallas gets the ball back from Tampa, and the Tampa D forces them to a three & out. Brady throws a dart to Godwin, putting the offense inside the redzone. Rolling out to his left, Brady throws into traffic but right to Gronk for the first TD of the season for the legendary duo. 14-7. The Dak to Lamb connection shines again, getting Dallas to the halfway point. Prescott targets Lamb in the endzone, but a miscommunication almost results in an interception by Tampa cornerback Carlton Davis. Dallas sets up for a 31-yard field goal try by former Rams’ kicker Greg Zuerlein, also known as Greg the Leg, but he pulls it hard left. Running back Ronald Jones Jr gets the handoff but gets the ball punched out by defensive end Demarcus Lawrence, and defensive end Randy Gregory recovers the fumble, giving the Cowboys great field position. Dak drops a low snap, but reacts quickly and picks it up and throws the touchdown pass to Cooper. Zuerlein doinks the extra point attempt so the Cowboys trail 13-14. Brady tries to dump off a pass to Fournette who bobbles the ball and it gets intercepted by second year cornerback Trevon Diggs. The Dallas defense getting another turnover. Linebacker Lavonte David almost comes down with an interception of Prescott, but the defense still holds them to a field goal which fortunately for Zuerlein, he makes from thirty-five yards out. 16-14 Dallas has its first lead. Cowboys fans and players can only rejoice for about a minute as in two plays Brady hits AB deep in stride for a Tampa TD, and they take back the lead 21-16. With Dak and the offense trying to score in a two minute drill, linebacker Shaq Barrett gets the first sack on Dak of the night. A penalty also sets the Cowboys back even further, now out of field goal range on third & thirty-two. They have Zuerlein try a sixty yard kick, and he makes a great attempt, but it falls short. With seconds left before the half, Brady tries a Hail Mary that gets picked off in the endzone by cornerback Jourdan Lewis, who takes it out and almost gets a chance to take it all the way but gets tackled, and that ends the half.

Quarter 3: Cowboys start the second half with the ball. Dak throws a dart to Cooper who gets down to the Tampa thirty-five. Hit as he throws, Dak’s pass is caught for the first down by Cooper, who came back on his route to catch it. On third & goal, Dak flips the ball to running back Ezekiel Elliott who gets taken down by safety Andrew Adams. Greg comes in to kick, and just gets the ball inside the left upright from twenty-one yards out. Score now Tampa 21-19. Dallas with the ball back, Dak throws into traffic targeting Lamb, and is picked of by Davis. Brady responds with a short drive that is capped off with a pass to Gronk for the TD. 28-19. Tight end Dalton Schultz and Elliott each get first downs in helping their offense get down field, and Cooper takes in Dak’s pass for another touchdown.

Quarter 4: Brady on third down steps up in the pocket and drops one in for Godwin, who drops the pass. They shut down Dallas’ drive and with the ball back, Brady, moving around the pocket, begins to fall down, but mid-fall, the forty-four year old QB gets his pass off and Fournette makes an impressive effort and catches the ball for a first down. Just when it looks like the Bucs will score another touchdown and most likely put the game away, as Godwin receives a pass, he attempts to gain extra yardage but fumbles the football, and it is scooped up by Jourdan Lewis. Dallas’ defense getting a crucial turnover. Third & eleven, Lamb gets a pass, makes a move, and sprints down field for a big gain. Set back by a penalty, the Cowboys try a forty-eight yard field goal, and Zuerlein delivers this time with a great kick. Cowboys take the lead 29-28, but they still left Brady more than enough time on the clock.  With some completions to Gronk, Brady hits Godwin along the left sideline, getting them great field position for a field goal attempt, though it is debatable whether Godwin committed offensive pass interference or not on Lewis. With seven seconds left on the clock, kicker Ryan Succop hits the thirty-six yarder, and the Tampa Bay Buccaneers win in the final seconds of the game 31-29 in an insane kickoff to the NFL season.

This has been one of the greatest season opener games in recent memory. It went down to the final seconds, both teams executed explosive passing offenses, and there was plenty of game changing turnovers as well. There were penalties galore throughout the game including multiple on special teams, but that’s more common for the players first game of the season.

Injury updates: Sean Murphy-Bunting suffered a dislocated elbow. Number weeks he is out is unknown. Michael Gallup suffered a calf strain and will be out 3-5 weeks. In other news, Cowboys’ offensive tackle, La’el Collins is suspended five game for violating the league’s substance abuse policy.

Tampa Stats: Tom Brady completed thirty-two passes out of fifty pass attempts, passed for 379 yards, and threw four TDs and had two passes picked. The running game was barely existent with Fournette being the team leading rusher with thirty-two yards. Antonio Brown showed out leading the team in receiving yards with 121. Godwin put up 105, and Gronk 90.

Dallas Stats: Dak Prescott had a whooping fifty-eight pass attempts, completing forty-two of them, passed for 403 yards, and threw three TDs to one INT. Dallas had little rushing game either, with Zeke leading with only thirty-three yards. Amari Cooper balled out with 139 receiving yards, and CeeDee 104 himself, making up for his early drops. The Cowboys defense also had an impressive four turnovers.

The reigning Super Bowl champs barely edged out the win, but they now sit at 1-0 as they face the Atlanta Falcons in Week 2. Dak looks to be back from his injuries, and better than ever. This game was a great test for Dak, and despite the loss, he passed with flying colors. Now let’s see how he can follow up this performance versus the Los Angeles Chargers in the second week of the NFL season.