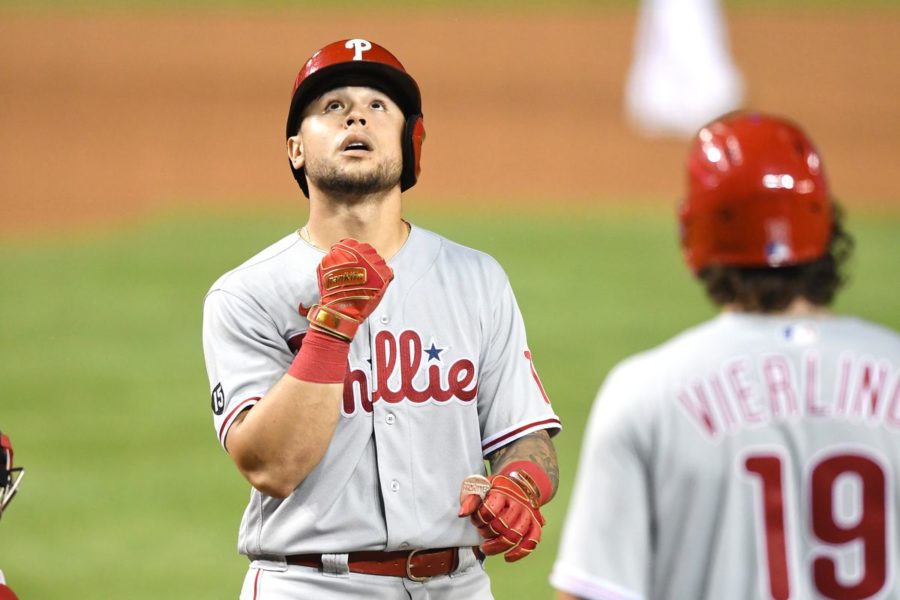 An underwehelming lineup for the Philadelphia Phillies guides them to an impressive 12-6 win over the Washington Nationals, brightening their playoff chances even further. Photo by Mitchell Layton

Phillies have few chances left for a Postseason push

As we near closer and closer to the MLB postseason in October, the Philadelphia Phillies have been on a hot streak in a late attempt to snag a playoff spot.

They had won eight straight games, one against the Pittsburgh Pirates, sweeping a series against the Washington Nationals, and a three game series against the New York Mets. They more recently, however, have fallen back down to earth, and have been splitting most of their series, which included losing a handful of games to the Arizona Diamondbacks and Tampa Bay Rays. The Phillies currently sit just above a .500 record, winning their last series 3-1 against the Diamondbacks, scoring seven runs in each of the four games played.

The Phillies currently place second in the NL East only below the Atlanta Braves, and outside of the current playoff picture. They sit as the seventh seed in the National League Conference, and with the MLB going back to ten total teams in the playoffs, the Phillies need to put it into overdrive to make it into the postseason this year.

In their most recent game played, The Phillies defeated the Nationals 12-6, getting them one step closer to a hopeful playoff spot.

Inning 1: The first inning kicks off with Patrick Corbin at pitcher for the Nationals. He pitches to Phillies’ Jean Segura, who hits a ground ball that is fielded by Luis Garcia, and throws to Adrian Sanchez to force the out at second, and Sanchez connects with first baseman, Ryan Zimmerman to cause the double out. Star Phillies player, Bryce Harper, hits a grounder to the outfield which is immediately fielded by Sanchez who throws it to Zimmerman to force the third out on Philly. Bottom of the first, Matt Moore starts off as Philly’s pitcher, a left-handed one. Zimmerman hit a pop fly ball which is caught by Segura, ending the first inning.

Inning 2: Jorge Bonifacio gets out running to first, and now the Phillies have two outs in the 2nd. Ronald Torreyes drills a ball to center field where it is caught by Lane Thomas, ending the top of the second. Corbin attempts to bunt Moore’s pitch but fails resulting in an out. Thomas up to bat hits a line drive to a the gap in left center field. Garcia scores the first run of the night, and Sanchez gets to third with Thomas at second with a double and an RBI. Carter Kieboom strikes out ending the second.

Inning 3: Matt Moore and Segura are two who strike out which assists to the Nationals switching to hitting. Nationals’ Josh Bell hits a line drive to the right field corner for a double. Zimmerman then hits one down the left field line, sending Bell home. Nats up 2-0. Garcia hits one now back to the right side field and it bounces into the Nats’ bullpen. Zimmerman scores and they go up 3-0. Matt Moore gets a ball hit right to him on the mound and throws to first to get Corbin out.

Inning 4: Harper bunts a successful fair ball down third for a single. Andrew McCutchen then hits a homer deep into the left field stands sending him and Harper home. Phillies now only trail 2-3. Now bottom of the fourth, Kieboom hits a home run, and Washington goes back up by three runs. Bailey Falter comes in at pitcher for the Phillies, and Nationals’ Keibert Ruiz gets out at first.

Inning 5: Corbin gets his fourth strike out the night on Falter. Bonifacio hits a short grounder. Corfin scoops up the ball but no one’s covering third base, as the Phils catch a break, getting a runner home, and one on third and first respectively. Philly trails 3-5. Sanchez fields a ground ball to second, and tosses to Zimmerman to get Torreyes out a first base.

Inning 6: Almost right off the bat, Rafael Marchan hits a home run, sending him and one other home, tying the ball game five runs a piece. Harper hits a line drive, sending two runners home, but getting out trying to get to second base. Despite that, the Phillies take their first lead of the game now up 7-5. McCutchen gets an RBI double putting the Phillies up 8-5. Odubel Herrera sends Segura home on an RBI single. Phils extend to a four run lead up 9-5 .

Inning 9: A lead off double at the top of the ninth by Matt Vierling, which is soon followed by a Brad Miller home run, just barely reaching the stands puts the Phils up 11-5 now. The ball gets away from Nats’ catcher Ruiz, and Segura gets home. Philly goes up now 12-5. Bottom of the final inning, The Phils get all three outs with only one more run scored by the Nationals, and the Phillies win the ball game with a come from behind win with a final score of 12-6.

If Philadelphia keeps consistently pulling off wins, then their chances of snagging a playoff spot become brighter and brighter.