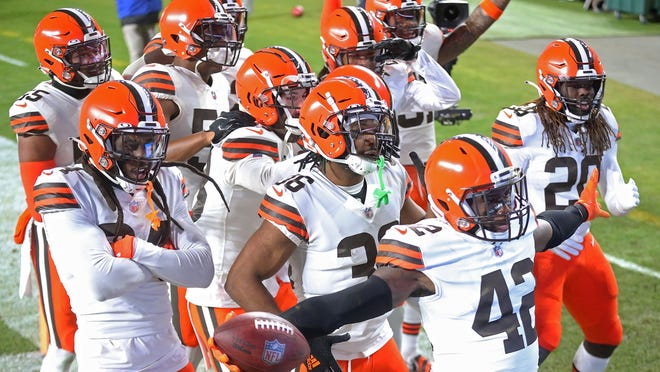 The 11-5 Cleveland Browns became the third team on Wild Card Weekend to end a long painful playoff win drought. The Browns got hit with a late season Covid outbreak causing them to lose to the Jets, and barely beat the Steelers’ backups in Week 17. This caused for concern as they entered the playoffs to face Big Ben’s Steelers. It had gotten even worse as Browns’ head coach, Kevin Stefanski, tested positive for Covid, and was not allowed to coach their first playoff game. But despite missing him, and a handful of players, Baker Mayfield and the Browns handed it to the 12-4 Pittsburgh Steelers, and showed everyone that they are for real.

Quarter 1: The first quarter kicked off with a high snap by center Maurkice Pouncey for quarterback Ben Roethlisberger, as the ball rolls into the endzone where the Browns recover it for a touchdown. Cleveland leads 7-0. Big Ben gets pressured and attempts to toss up the ball to runningback Benny Snell, but it goes over Snell’s head and is intercepted by cornerback M.J. Stewart. Wide Receiver Jarvis Landry catches a pass down the middle of the field and takes it in for the touchdown. Browns lead 14-0. Pittsburgh is stopped, and with the ball back, Nick Chubb, Cleveland’s star runningback, breaks free for a big gain into Steeler territory. The other half of the Browns’ runningback duo, Kareem Hunt, bulldozes his way into the endzone. Cleveland extends to a 21 point lead. Big Ben slightly overthrows wide receiver Diontae Johnson, and the pass is intercepted by safety Sheldrick Redwine. Hunt gets handed off to again, and weaving around defenders, gets in for the score. The Cleveland Browns lead 28-0 over the Steelers.

Quarter 2: Big Ben has a pass batted at the line and defensive end Porter Gustin hauls it in for the pick. Still with no points, Big Ben looks deep and connects with wide receiver James Washington. Down to Cleveland’s goaline, runningback James Conner runs right, and walks into the endzone. Steelers finally put up some points. They now trail 7-28. Hunt and Chubb drive the Browns’ offense downfield, and Mayfield passes to tight end Austin Hooper to put up more points before Halftime. Pittsburgh goes on a last second drive, and Chris Boswell kicks a 49-yard field goal to end the half. Browns lead 35-10.

Quarter 3: Dinking and dunking their way down the field, Big Ben drops in a pass for tight end Eric Ebron in the endzone. They go for the two-point conversion but do not convert. Score now 35-16 Browns. JuJu Smith-Schuster makes a wide open catch, and takes the ball down to Cleveland’s ten. He then follows it up with a first down, and then catches the touchdown pass. Steelers trail 23-35.

Quarter 4: Landry catches a pass and tightropes down the sideline. Chubb then grabs a short pass by Baker, breaks some tackles, and takes it all the way for the touchdown. Cleveland extends their lead again now 42-23. Roethlisberger hits JuJu open in the middle of the field in Browns’ territory. Rookie wide receiver Chase Claypool makes a reaching grab for the ball and hauls it in for the touchdown. Another two-point conversion comes up empty for Pittsburgh. Score: 42-29 Browns. Cody Parkey kicks a chip shot 24-yard field goal. Cleveland reaches 45 points on the night. With three minutes left, and down by sixteen, Big Ben does not see linebacker Sione Takitaki, and gets picked off for the fourth time. Parkey hits a 37-yard kick, and Cleveland goes up 48-29. With nothing to gain except garbage points, Ben hits Claypool for six. The two-point conversion is complete to Conner, and Pittsburgh cuts their loss to eleven points. The underdog Cleveland Browns come out and put on a show to defeat the Pittsburgh Steelers 48-37.

The Browns are scary good. They have the best runningback duo in the league with Chubb and Hunt, not to mention their receiving weapons Landry, Hooper, Njoku, etc catching passes from 2018 first overall pick Baker Mayfield. Myles Garrett is one of the best defensive players in the league. On top of all that, they performed at a high level without their head coach against an elite defense. They put up the most points (28) in the first quarter of a playoff game in NFL history. What a way to return to the postseason. Baker completed 21 of his 34 passes for 263 yards and three TDs. Nick Chubb rushed for 76 yards, and Jarvis Landry led in receiving with 92 yards. Karma hit hard for the Steelers after their 11-0 start turned into a 1-4 finish, and going one and done in the playoffs. Players had begun getting full of themselves, especially JuJu who disrespected Cleveland before their game and payed for it,  irritating other players and fans. Big Ben completed 47 of his whooping 68 pass attempts for 501 yards and four TDs to four INTs, yikes. James Conner had a mere 37 rushing yards, and JuJu had 157 receiving yards. Diontae Johnson also had 117 yards. Head Coach Mike Tomlin will be sure to have a talking to with his players, Especially the ones creating unnecessary drama. Meanwhile, the Cleveland Browns will celebrate their first playoff win in over two decades. Their elite rushing game will compete with the Patrick Mahomes led passing attack next weekend as they head to Arrowhead Stadium to take on the reigning Super Bowl Champion Kansas City Chiefs, and look to at least reach their first Super Bowl in franchise history.