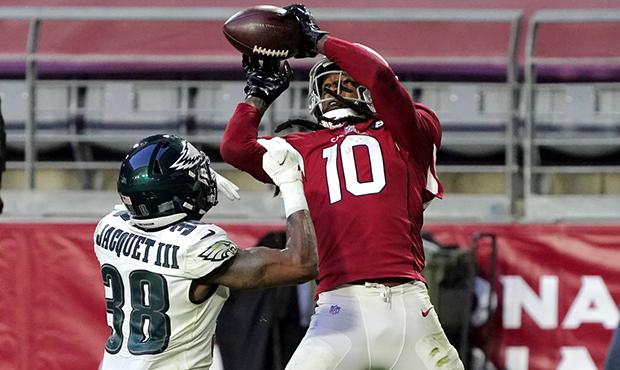 Well despite the loss to the Cardinals, and playoff hopes slipping away, Jalen Hurts is looking more and more like the Eagles’ franchise QB for the future after bringing the game down to the wire against the Kyler Murray and Deandre Hopkins led Arizona Cardinals. Carson Wentz stated that he wants out of Philly if he remains the backup, as he has no intention of being in that position. That just might be for the best. Philly was coming off an upset win over the Saints with Hurts, and the Cardinals had a bounce back game against the Giants. Arizona comes out victorious once again as they look to still make the playoffs, while this year has turned into a rebuild in Philadelphia.

Quarter 1: On Arizona’s opening drive, DeAndre Hopkins fumbles the ball in the redzone, and the Eagles recover it, preventing an opening drive score for the Cardinals. Jalen Hurts gets pressured and throws the ball away but he was not out of the tackle box, and there were no receivers near where he threw it, which drew a penalty. Hurts was also in the endzone when it happened so it was also a safety. Cardinals lead 2-0. Murray finds tight end Maxx Williams for the first down, and Williams managing to stay in bounds and runs down the sideline, all the way to the Eagles’ ten yard line. Murray then evades a defender and runs into the endzone for the touchdown now up 9-0. Hurts throws a screen pass to Miles Sanders, and he gets down to about the 50 yard line. After a tackle for loss on Jalen Reagor, Hurts gets sacked by linebacker Dennis Gardeck. The Eagles are forced to punt, it is blocked, and the Cardinals get it at the Eagles’ six. Murray connects with runningback Chase Edmonds for the touchdown. Cardinals go up 16-0. Alshon Jeffery makes a nice catch along the sideline to end the first quarter.

Quarter 2: Entering the second quarter, Hurts throws a screen pass to rookie receiver Quez Watkins, and he runs it in for the score from 32 yards out. Eagles finally score, now down 7-16. Murray responds by heaving the ball deep and in double coverage, Hopkins makes the grab. Cardinals are then forced to attempt a 40 yard kick, and Mike Nugent does just that. Arizona extends lead to twelve. With the ball back, Kyler tries to escape but gets caught and the ball is knocked from his hands and recovered by the defense. After a Sanders first down run, Hurts rolls left and fires it to Greg Ward for the score. Arizona’s lead decreases to five. The Cardinals respond by driving down the field, and Larry Fitzgerald makes an amazing catch in the back left corner of the endzone. 26-14 Cardinals. With less than two minutes left in the half, Hurts looks for the big play and gets it to Zach Ertz. He then throws a touchdown pass to Ward Jr. once again. Philly goes for two, but Sanders gets stuffed and they do not get it. Score now 26-20, Cards, as the half ends.

Quarter 3: After no success for either team on their opening drives to start the half, Hurts is hit as he goes to throw and fumbles to ball, but luckily it is recovered by the offense. Edmonds gets them into the redzone, and Murray throws it directly to an Eagles defender and is intercepted. Hurts gets sacked, and a false start penalty occurs setting Philly’s offense back to third & 29. They run a screen pass play, and Reagor picks up twenty-three yards. On fourth down, Hurts steps up and runs for the first down and more. He then runs again, and reaches into the endzone for the touchdown. The extra point attempt snap is botched. Tie ball game 26-26.

Quarter 4: Cardinals get stopped and bring out the punt team but its a trick play as the punter Andy Lee throws a pass for a first down. Arizona is then faced with another fourth down situation and do not move-the-chains. They get the ball back soon after, and Hopkins, after the catch, gets them down into Eagles territory. On third down, Murray targets Hopkins again, and D Hop makes an insane catch, staying in bounds, and getting the touchdown. Cards lead 33-26. Jeffery makes a wide open catch as cornerback, Dre Kirkpatrick slipped and fell, and he picked up some yardage. Hurts takes back-to-back sacks, and the next pass is incomplete to Dallas Goedert. They go for it on fourth & long, and the pass is batted down. Eagles defense gets the offense the ball back quick. Hurts with less than a minute, fumbles the ball, but recovers it, and somehow completes the pass. Hurts with the Hail Mary throw, does not get it, and the Cardinals escape with the win 33-26.

With that loss, and the Cowboys win over San Fran, the Eagles now fall to 4-9-1 and last in the NFC East. At least it looks like they have a promising future QB. Hurts finished the game with 338 yards and three TDs. Sanders put up 64 rushing yards and Ertz led with 69 receiving yards. The Cardinals improve to 8-6 and hold onto the 7th seed in the playoffs. Murray passed for 406 yards and three touchdowns to one INT. Edmonds got 47 rush yards, and Hopkins had a stellar day with 169 receiving yards. Arizona plays a divisional game against San Fran next week to stay alive in the playoff race. Philadelphia takes on the Cowboys next week and whoever losses the game is eliminated from the playoff race, but this game might not matter in terms of that if Washington beats Carolina next week, then both the Eagles and Cowboys are eliminated. Its down to the last two weeks. Can Philly get a miracle to stay alive, or do they just hope for the best next year has to offer.