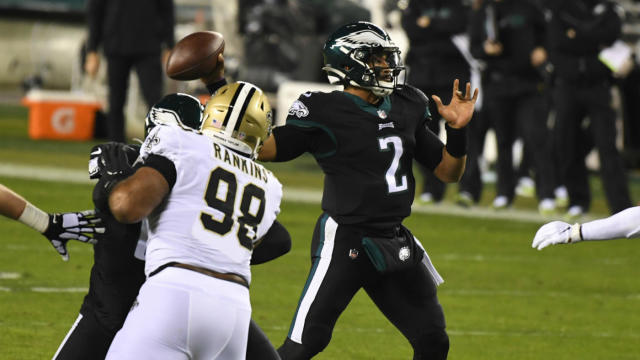 Well looks like a quarterback change was just what Philly needed. Rookie QB Jalen Hurts was given the starting role Sunday due to Carson Wentz underperforming all season, and the rookie got it done in his first start at quarterback. They took on the surging New Orleans Saints who despite not having Drew Brees, have won their last three games with QB and swiss army knife Taysom Hill. Hurts and Miles Sanders ran all over the Saints defense, and the previously 10-2 Saints, for the most part, had no answer for this Jalen Hurts led offense.

Quarter 1: Hurts puts together a solid first drive, but head coach Doug Pederson decides to be aggressive right off the bat and has them go for it on fourth down, and the Saints’ defense does not let then convert. Saints drive and try for a 45 yard field goal, which kicker Wil Lutz misses, as it curves to the outside of the uprights at the last second. Jalen Hurts finds a wide open receiver, Jalen Reagor, for a big gain that gets the Eagles inside the 25 yard line.

Quarter 2: That play then leads to another fourth and short situation, and Pederson elects to go for it again, and this time Hurts completes a pass to wide receiver Alshon Jeffery, who falls into the endzone for the touchdown. Eagles score first, 7-0. Philly’s defense puts pressure on Hill and he tries to get it to runningback Alvin Kamara who tips it, and it is intercepted by linebacker Duke Riley. From 44 yards out Jake Elliott makes the field goal. Philly goes up 10-0. Saints continue to struggle to put up any points and give the Eagles the ball back. Miles Sanders breaks free and runs all the way to the endzone for a 82 yard rushing touchdown. Philly now improves to a 17 point lead. Saints go into a hurry-up offense and defensive tackle Fletcher Cox sacks Hill on third down. With the ball back, Hurts takes off running into field goal range. He then runs for a first down and gets inside the 10. Elliott goes to kick a 22 yard field goal right before the half, but completely shanks it to the left, hitting the left upright ending the half.

Quarter 3: Saints immediately pick it up in the second half and Hill pitches the ball to Kamara, who gets in for the touchdown. The Saints finally get on the board trailing 7-17. Once again, the Eagles try to move the chains on fourth down, and the Saints defense does not allow it. After a nice gain by wide receiver Michael Thomas, Taysom fakes it to Kamara and throws it deep to wide receiver Emmanuel Sanders who makes the catch in the endzone for the score. Saints decrease their deficit to 14-17.

Quarter 4:  New Orleans head coach, Sean Payton decides to be aggressive and go for it on fourth down, and while trying to find someone, Hill fumbles the football and the Eagles recover it. A flip to Reagor picks up more yardage. Saints get a couple penalties, and Sanders gets into the endzone. Eagles extend their lead. 24-14. With the clock under two minutes left in the game, Hurts fumbles the ball, and the Saints recover, now given a chance to comeback. Hill fires and wide receiver Tre ‘Quan Smith makes the catch along the sideline. Tight end Jared Cook then makes a good catch scoring a Saints touchdown. Saints trail 21-24 and attempt an onside kick. The Saints come so close to recovering the onside kick but Philly comes up with it, sealing their first victory after losing four straight. Final score: 24-21.

So far for the Philadelphia Eagles, their decision to bench Wentz and start Hurts this past week has worked out immediately for them, as as the rookie wins in his first start, keeping the Eagles from falling into last place in the NFC East after the Cowboys blew out the Cincinnati Bengals. Hurts passed for 167 yards and a touchdown. He also rushed for over 100 yards, totaling 106 on the day. Their leading rusher however, was Sanders with 115 yards of rushing. Reagor led in receiving yards with just 46. It is also worth mentioning that the Saints defense has not allowed a 100 yard rusher in the past 56 games until this game in which they allowed two players to eclipse the 100 yard mark on the day. As for the New Orleans Saints, they received their first lost since Week 4, and the first loss with Hill at QB this year. Hill threw for 291 yards and a 2:1 touchdown to interception ratio. Kamara rushed for just 50 yards on the day, but also had 44 receiving yards. Thomas led the team in receiving yards with 84. The Saints still sit atop the NFC South with a 10-3 record but now are tied with the Green Bay Packers for the #1 seed in the NFC. For the Eagles, They improve to 4-8-1, still third in the division but now only a game behind the Giants who fell to the Arizona Cardinals, but Washington one their fourth straight game, beating the San Francisco 49ers and still hold a two game lead over the Eagles as well as the division title.