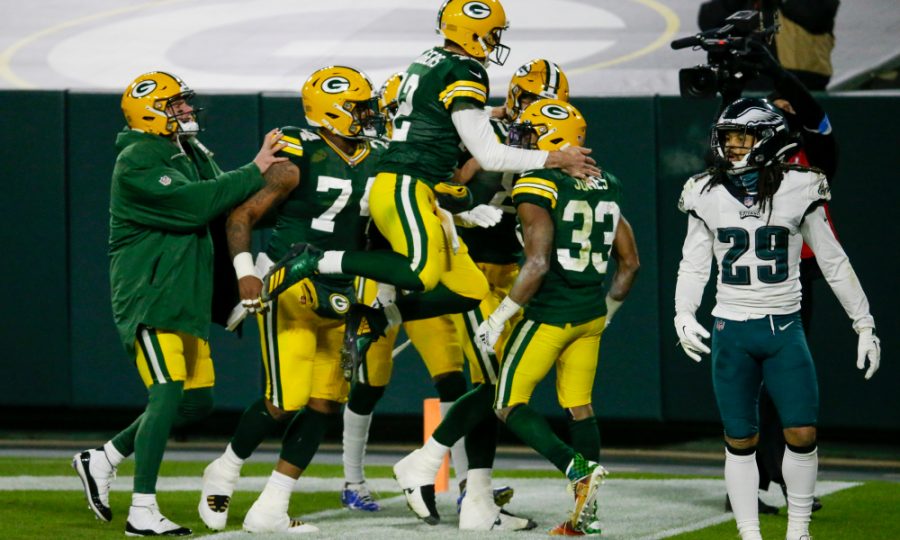 The Eagles take another L to the Green Bay Packers, and Carson Wentz gets benched for Jalen Hurts

It finally happened. What all Eagles fans were hoping and praying for. No they did not win. Carson Wentz finally got benched. Rookie quarterback Jalen Hurts came in to finish the game in the third quarter as the Eagles finally made the decision to play Hurts. Unfortunately it wasn’t enough to pull off a comeback. Philly still struggled against a high-powered Green Bay offense led by future HOFer quarterback Aaron Rodgers. As the Packers continue to hold their division’s crown, The Eagles chances continue to fall more and more out of reach every week.

Quarter 1: Philly puts up the first points of the game as kicker Jake Elliott nails a 52-yard field goal putting the Eagles up 3-0. The runningback for Green Bay, Aaron Jones drops the pitch back pass and losses yardage, and Rodgers gets sacked on the next play. Eagles regain possession. After getting into Green Bay territory, Wentz takes back-to-back sacks, putting the Eagles out of field goal range, forcing them to punt.

Quarter 2: Rodgers leads his team right down the field, and star wide receiver, Davante Adams, comes down with a nice pass by Rodgers on fourth & goal in the endzone for a touchdown. Green Bay leads 7-3. Wentz gets sacked once again, and with the ball back, Rodgers throws to wide receiver Marquez Valdes-Scantling for a good gain into Philly territory. After another nice play, Rodgers steps backs and finds tight end Robert Tonyan in the endzone for the score. Packers increase their lead to 14-3.

Quarter 3: From deep inside their own territory, Wentz finds a wide open Dallas Goedert, the tight end, and he gets to about the 50. Green Bay stops them and Rodgers, standing in his own endzone, drops a dime to Adams in double coverage. Soon after, they get another big catch by wide receiver Allen Lazard. Adams then stiff arms cornerback Darius Slay, and Adams plows into the endzone. 20-3, the Packers extend their lead. Jalen Hurts now comes in at QB for Philly, and he drops in an absolute dime for rookie receiver, Jalen Reagor. Runningback Boston Scott then picks up a big gain on the ground, but a penalty calls it back. That drive comes up empty.

Quarter 4: Packers score the first points of the fourth quarter with kicker Mason Crosby kicking a 40-yard field goal. Packers lead 23-3. On a fourth & long for Hurts and the Eagles offense, he finds and completes the pass to receiver Greg Ward Jr. in the endzone for Hurts’ first TD pass of his NFL career. Score now 23-10 Packers. The Packers are forced to punt. Reagor fields it at the 26, and runs it back all the way for a Philadelphia punt return touchdown. Elliott misses the extra point, but the game is now within reach as the Eagles now only trail 16-23. But Green Bay responds with Aaron Jones breaking free and running 77 yards for the score. The Packers go up 30-16. Hurts is hit as he throws and the ball is intercepted by safety Darnell Savage Jr, sealing the win for the Packers over Philly.

The Green Bay Packers improve to 9-3, first in the NFC North, and the current #2 seed in the NFC playoff picture. The triple threat of Rodgers, Jones, and Adams continues to prove tough for opponents. Rodgers threw for 295 yards and three touchdowns. Great performances by Jones as he rushed for 130 yards, and Adams who racked up 121 receiving yards. Green Bay’s defense also accumulated seven sacks. As for the Philadelphia Eagles, they now fall to 3-8-1, and remain in third place in the NFC East with Washington and the Giants both pulling off upsets against the Pittsburgh Steelers and Seattle Seahawks to both improve to 5-7. Wentz passed for 79 yards, and Hurts passed for 109, a touchdown and an interception. Miles Sanders only mustered 31 rushing yards, and Goedert led the team in receiving yards with 66. The Packers go to Detroit to play the Lions, which shouldn’t prove challenging, meanwhile, the Eagles take on the New Orlean Saints, most likely with Taysom Hill at QB again, which should prove tough for this Eagles team, as the Saints have still been rolling with Hill under center. I think its safe to say that the Eagles are pretty much out of the playoff race with their continuous tough schedule, and Washington and the Giants surging right now, Philly should turn their sights to the upcoming NFL draft.