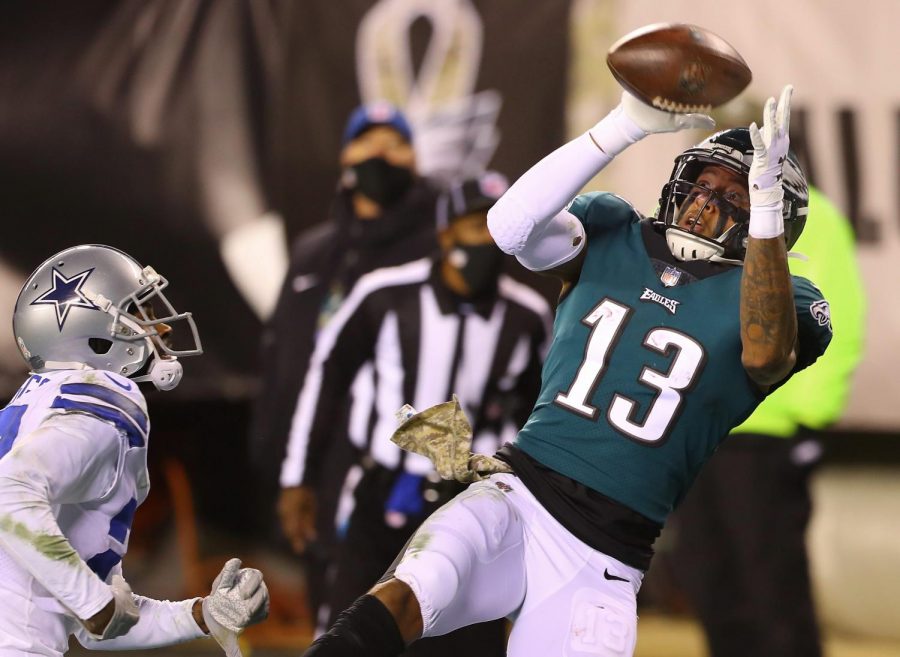 In a battle for the NFC East, the Philadelphia Eagles and Dallas Cowboys faced off in a Sunday Night Football matchup. Dallas came into the game with their third string quarterback, Ben Dinucci, since Andy Dalton is out with a concussion. They are also following a blowout loss to Washington in which they were only able to muster three points against. As for the Eagles, Wentz led a comeback in the fourth quarter to beat the Giants by one. Even though both teams only had two wins in this week 8 matchup, both still have a chance of winning the division, and most likely claiming the fourth playoff seed.

Quarter 1: Right away, Dallas tries a fancy double toss back play to rookie receiver, CeeDee Lamb, and pick up some good yardage. They don’t do too much more as the Eagles hold them to a 49-yard field goal kick, which kicker, Greg Zuerlein makes with ease. Cowboys score first 3-0. The Eagles get a nice run from runningback, Boston Scott, and then the next play, Wentz is sacked, and the very next play, is sacked again, and loses the football, and the Cowboys recover it. Dallas quickly gets into the redzone, but Dinucci is sacked by defensive end, Brandon Graham and now he fumbles the football, and Philly recovers it. Wentz completes a pass to Travis Fulgham along the sideline, getting them into the redzone. Two plays later, Jalen Reagor breaks the plain of the endzone, catching his first touchdown pass of the year. Eagles take the lead 7-3.

Quarter 2: Philly gets the ball back and Coach Doug Pederson decides to go for it on fourth down, and linebacker Leighton Vander-Esch drills Wentz, forcing him to fumble once again, and once again, the Cowboys defense recovers it. Eagles refuse to let Dallas into the endzone, and Zuerlein kicks another 49-yard field goal. 7-6 Eagles still lead. Carson targets Reagor in the endzone, but is off target, and rookie cornerback, Trevon Diggs, picks Wentz off. Philly stops Dallas and gets the ball back late in the first half, but once again fail to convert on a fourth down. Cowboys get down the field. and Greg the leg, works with the windy conditions and kicks a 59-yard field goal, giving the Cowboys the lead at halftime 9-7.

Quarter 3: Entering the second half, Wentz takes a shot downfield, overthrows his receiver, and Diggs gets his second interception of the night. Dinucci has a nice drive, and Zuerlein attempts another kick, this time 52 yards, but it goes wide right with the wind. Wentz avoids turning the ball over this time and throws a touchdown to Fulgham. Reagor and Wentz then connect for the two point conversion, putting the Eagles up 15-9.

Quarter 4: Dallas goes for it on fourth down, opting not to kick another field goal, and they fail to convert. Trying to move the chains on 3rd & 8, Dinucci is hit and the ball comes loose, and Rodney McLeod takes it all the way back for an Eagles touchdown. The two-point conversion fails, and Philly extends their lead to 21-9.  A high snap, that goes over the Cowboys punter’s head, and the endzone, gives the Eagles a safety, now up 23-9. Zuerlein tries a short pop up onside kick, hoping to give Dallas the ball back, but they fail to recover it, pretty much icing the game for Philly who has now won back-to-back games.

The Eagles now improve to 3-4-1, still first in the division, and the Cowboys fall to 2-6, now third in the division behind Washington. Wentz threw for just 123 yards, two touchdowns, and had four total turnovers against the atrocious Dallas defense. Scott rushed for 71 yards and Fulgham was the team’s leading receiver with 78 yards. For the Cowboys, Ben Dinucci threw for 180 yards and had no touchdowns or picks. Ezekiel Elliott rushed for 63 yards and Michael Gallup had 61 receiving yards. Overall, the score itself doesn’t indicate how close the game really was. And it was a poorly played game as well, on both sides of the ball. Nevertheless, a win is a win, and Philly continues to sit atop the division.