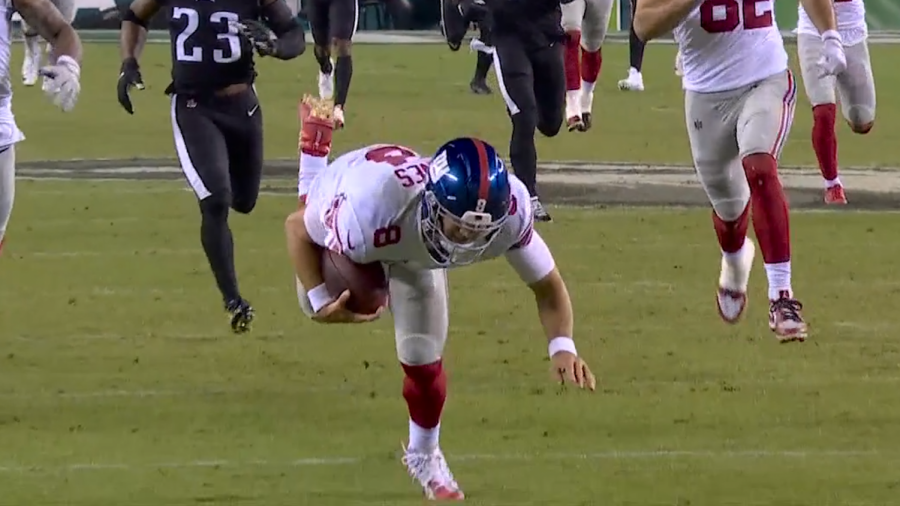 Giants quarterback, Daniel Jones, trips and falls running down the field trying to run for a touchdown against the Eagles on Thursday Night Football.

Daniel Jones took a tumble and the tides turned during this Thursday Night clashing between NFC East opponents. Not the most desired game to watch on primetime as the NFC East teams have all looked awful this season so far, and not to mention all the injuries on both teams who are each missing key players. This game really came down to which team made less mistakes than the other, and that team was the Philadelphia Eagles who came back from a 10-21 deficit in the 4th quarter to win the game.

Quarter 1: On the Eagles opening drive, with the help of DeSean Jackson being back, they take the ball right downfield, and at the 2-yard line, Carson Wentz takes it himself into the endzone, as the Eagles score first. 7-0. Giants and Eagles both punt, and the G-Men get the ball back and Daniel Jones throws a great pass downfield to wide receiver Golden Tate, who shakes away from a defender and walks in for a touchdown tying the game up 7-7.

Quarter 2: Eagles comeback from a 2nd & 26 after an intentional grounding penalty on Wentz, and Jake Elliott kicks a 31-yard field goal. Eagles take back the lead 10-7. A quick throw by Jones bounces of tight end Evan Engram’s hands, and Eagles safety, Jalen Mills, catches it for an interception. The Giants then catch a break as Wentz overthrows a receiver, and cornerback, James Bradberry, picks it off in the endzone. Philly gets the ball back late in the first half, and New York’s defense holds them to a field goal attempt of only 29 yards which Elliott somehow misses to the left, ending the first half with the Eagles up by three.

Quarter 3: After both teams fail to get any points in each of their first drives of the second half, Daniel Jones takes off running from about the 12 yard line and speeds all the way down the the Eagles 20 yard line before randomly tripping and falling to about the 3 yard line. At the 1 yard line, runningback, Wayne Gallman dives in for a touchdown. Giants lead 14-10. Travis Fulgham makes a nice sideline catch for the Eagles during the next possession.

Quarter 4: After the Fulgham catch, they go for it on 4th & goal, and do not get it. The Giants D comes up with the stop. With help of a defensive pass interference call, Jones finds wide receiver Sterling Shepard open in the endzone to score a touchdown. New York expands their lead to 21-10. With a little over five minutes left in regulation, Wentz airs the ball down the field, and rookie John Hightower makes the catch down inside the Giants 15. The next play, Greg Ward Jr. catches Wentz’s pass for a touchdown, and the 2-point conversion is no good. 21-16 Giants still lead. With the game down to nearly two minutes, Gallman picks up a couple first downs for the G-Men, and one more would pretty much seal the victory for New York. Jones targets Engram along the sideline, and the ball bounces off his hands and goes incomplete. Philadelphia now has a chance to win the game. With some costly penalties, and good plays by Philly, the Eagles get down into the redzone, but a facemask penalty backs them up 15 yards. But that only gives them more room to work as Wentz drops a dot to runningback Boston Scott as even in great coverage, catches it, and slips in for the touchdown. Another 2-point conversion failed, but the Eagles have regained the lead 22-21. During the Giants last attempt to win the game, Brandon Graham forces Jones to fumble, and Vinny Curry recovers the ball winning the game for Philadelphia.

Well at least one NFC East team had to pull off the victory, and it looks like the Eagles accomplished that feat this week as they move to 2-4-1 and remain in first place in the division while the Giants fall to 1-6 and drop back into last after Washington’s win over Dallas. Wentz passed for 359 yards, two touchdowns, and an interception, plus a rushing touchdown as well. Scott led the team in rushing with just 46 yards, and tight end Richard Rodgers led the team in receiving yards with 85. For the Giants, Jones threw for 187 yards, two touchdowns and one interception. He was also the team’s leading rusher with 92 rushing yards, largely in part due to his big run, and Devonte Freeman getting injured. Their leading receiver was Shepard, who had just come back from an injury, with 59 yards. Even with this loss for the Giants, they are still only one win, and that tie by the Eagles, away from first place in the division. Will the Eagles be able to keep winning and possibly secure the division? Or will they get tripped up by the same ghosts that tripped Daniel Jones, and that Sam Darnold saw and got sacked by? The Eagles play the Cowboys next week so there is a good chance for back to back wins for them as Dallas will most likely be starting their third string rookie quarterback Ben Dinucci.