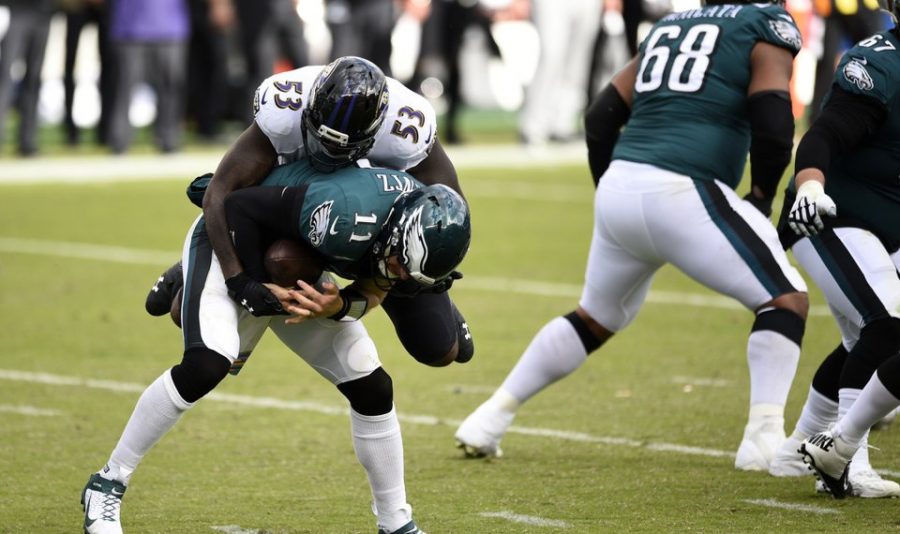 Back to back weeks of attempted comebacks for the Philadelphia Eagles. Both weeks they fell short of the win. They hosted the elite Baltimore Ravens, led by reigning MVP Lamar Jackson, who just decimated the Cincinnati Bengals, the week prior. While Philly is coming off a near comeback against the Steelers, Carson Wentz and the Eagles offense were unable the keep up with the Action Jackson led Ravens offense, and for most of the game, the Ravens defense kept the Eagles in check until Philly almost pulled off a comeback run, only to come up short as Baltimore came out on top.

Quarter 1: On the Eagles’ first drive, on a third & 22, Wentz airs in out to rookie receiver, John Hightower, but he drops it, forcing the them to punt. The Ravens get good starting field position, drive down the field, and Lamar tosses the ball to tight end Nick Boyle for the touchdown. Ravens lead 7-0. The Eagles try a designed quarterback run with Wentz, but the Ravens force a fumble and recover the football in Eagles’ territory, and runningback Gus Edwards, plows his way through the Eagles line for a touchdown. Baltimore leads 14-0.

Quarter 2: A nice catch and run by wide receiver Willie Snead, gets the Ravens back onto Philly’s side of the field. Eagles defense holds up, and forces the Ravens to settle for a 36-yard field goal, which future HOFer kicker, Justin Tucker makes. 17-0. Jalen Hurts comes in for a play for Philly, and gets a nice gain. Wentz and the Eagles get a few more good plays, and with a little over a minute left in the first half, Wentz finds Miles Sanders in the endzone, but he can not haul it in, and drops the ball. Carson attempts a Hail Mary, but gets intercepted by Brandon Carr. A flag comes in for roughing the passer, and the Eagles try for a field goal, which Elliott misses. Score at half is 17-0 Baltimore leading.

Quarter 3: Ravens with the ball, Lamar Jackson does what Lamar Jackson does best and runs for about a 15 yard gain. Eagles get ball possession back, and Sanders breaks free for a 74-yard run, similar to the one he had last week against Pittsburgh, but he fumbles the ball at the 10, and it rolls into the endzone to luckily get scoped up by wide receiver J.J. Arcega-Whiteside for the score. The 2-point conversion fails. Eagles finally get on the board 6-17. On the Ravens next possession, Lamar once again gets a nice run, and finds the endzone as well. Ravens lead 24-6. On a desperate third down, Wentz finds Hightower deep downfield, and completes the pass, for a major move-the-chains play.

Quarter 4: After coming up scoreless in the redzone, a roughing the passer penalty is called on Baltimore, giving the Eagles another chance as Wentz rolls out of the pocket and finds tight end Jason Croom wide open in the bottom right of the endzone. This time the 2-point conversion is complete to Greg Ward Jr. Eagles trail 14-24. Baltimore’s next drive ends in a completed 55-yard field goal as they go up 27-14. After a failed 4th down conversion by Philadelphia, the Ravens kick a 46-yard field goal to go up three more points now leading 30-14. Wentz takes off and picks up a nice 40-yards on the ground. In double coverage, Travis Fulgham is able to make the catch thrown by a pressured Wentz for the touchdown, and Arcega-Whiteside gets the 2-point conversion. 30-22. Eagles defense pulls up a nice stop, and get the ball back. Wentz rolls out of the pocket and heaves the ball into Ravens territory, targeting Fulgham, but it is smacked down by cornerback Marcus Peters, but a flag is thrown, and pass interference is called on Peters. Taking the Eagles all the way to the Ravens 22 yard line. Eagles fan or not, that was not a good call as both players respectfully were hand fighting. Wentz quarterback sneaks it at the one yard line and gets in. The Eagles now only trail by two, and another 2-point conversion ties up the game. They go for two, but it seemed that Wentz and Boston Scott both wanted the ball during the fake/real handoff, and fail to score as Matthew Judon takes them both down. The Eagles onside attempt is recovered by Baltimore, and Jackson gets the first down as the Baltimore Ravens win 30-28.

The Eagles put up a fight towards the ends but now drop to 1-4-1 on the season, but still remain in second as Washington and the Giants are awful as well. The Ravens on the other hand, advance to 5-1, and sit in second in the AFC North behind the undefeated Steelers. Wentz had 213 passing yards and two touchdowns to ZERO interceptions for the first time this season. Sanders rushed for 118 yards, most of that coming from his 74 yard run. Once again, Fulgham led the team in receiving yards with 75. For the Ravens, Lamar passed for 186 yards and a single touchdown. He was also the teams’ leading rusher with 108 yards. Marquise Brown led the Ravens with just 57 receiving yards. Baltimore gets the week off next week, and returns for a crucial divisional matchup against the Steelers in Week 8. Meanwhile, the Eagles have a shortened week as they play the New York Giants on Thursday Night Football. It was recently announced that Sanders will miss that game, and Zach Ertz will also be out for a few weeks, so we’ll see how the Eagles will perform as every divisional game in the NFC East is crucial as one game could be crucial to either taking or losing the division lead.