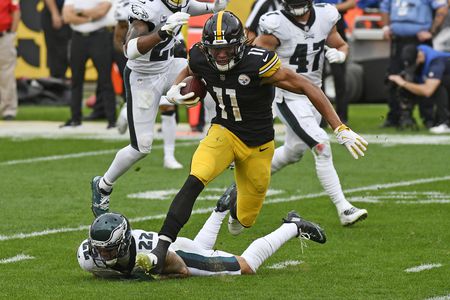 Well being atop the division was fun while it lasted for the time being for Philly. The Philadelphia Eagles lost their one week division lead to the Dallas Cowboys after the Eagles fell to their fellow in-state rivals, as they traveled to play the Pittsburgh Steelers on Sunday at Heinz Field. Both Pennsylvanian teams offenses played very well, and the surprise of an almost non-existent Steelers defense, almost gave Philly the win. But it was the lack of a good defensive performance, and Chase Claypool, we’ll get to him later, that caused the Eagles to lose their third game of the season.

Quarter 1: On Pittsburgh’s opening drive, Eagles’ pro cornerback, Darius Slay, gets flagged for pass interference on wide receiver, James Washington, setting the Steelers up inside the Eagles’ five yard line. Big Ben Roethlisberger hands off to the rookie wide receiver, Chase Claypool, and he flies into the endzone for a Steelers touchdown. 7-0, Pittsburgh leads. On third & long, Miles Sanders out runs the Steelers’ defense and scores a 74-yard touchdown. Philly ties the game at 7-7.

Quarter 2: After a nice run by runningback James Conner, Roethlisberger finds an open Claypool, and Chase scores his second touchdown of the day putting his team up 14-7. The Eagles drive downfield, and Sanders plows through the d-line, scoring another touchdown. The Eagles tie the game up once again, 14-14. Soon before the half, kicker Chris Boswell drills a 41-yard field goal. The Steelers take the lead again up 17-14.

Quarter 3: Big Ben tosses the ball to former Panther receiver, Ray-Ray McCloud, who picks up speed, and goes from about the Steelers’ 30 yard line, all the way down to the Eagles’ ten. With a nice play call, Claypool once again finds the endzone, and Pittsburgh goes up 24-14. From deep in their own territory, Wentz gets picked off by cornerback, Steven Nelson. The Steelers capitalize on this play, and Conner gets the score. Eagles now trail 14-31. On a must convert third & twelve, Wentz targets receiver Travis Fulgham, who has been reliable all game long, makes a crucial and great catch. In the redzone, Wentz throws the ball up, and Greg Ward Jr is there to catch it and score. Philly decides to go for two points, and rookie receiver John Hightower makes the catch. The score now 31-22 Pittsburgh.

Quarter 4: Fulgham makes a few more crucial catches, before scoring the touchdown, getting the Eagles within two points of the Steelers. 29-31. In a third & long situation, Roethlisberger gets it to former Colts and Lions tight end, Eric Ebron, but the ball is knocked loose, it is ruled a fumble, and the Eagles recover the ball. With a clutch play by Pittsburgh cornerback, Joe Haden, the Eagles bring out Jake Elliott to kick a 57-yard field goal which he misses to the right of the goal post. The Steelers go down the field, and Big Ben hits a wide open Claypool in the middle of the field, scoring his FOURTH touchdown of the game. In desperation mode, Wentz heaves the ball downfield, and it gets intercepted once again, pretty much sealing the game for Pittsburgh who comes away with the victory 38-29.

The Philadelphia Eagles drop to 1-3-1, and fall to second in the division after this game. Meanwhile, the Pittsburgh Steelers, stand tall at 4-0, and atop the competitive NFC North. Both teams had explosive offenses, while their defenses were quiet for the most part. Carson Wentz threw for 258 yards, two touchdowns, and two interceptions. Sanders rushed for 80 yards and 2 TDs, most of those yards coming from his big run earlier in the game. But the best player on the Eagles was Fulgham, who racked up 152 receiving yards. What a great performance for him. Big Ben passed for 239 yards and three touchdowns. Ray-Ray McCloud ended up leading the team in rushing yards with 63, and Claypool led in receiving with 110 yards and an astonishing four touchdowns on the day. He’s already looking like the next star receiver for Pittsburgh. Not to mention, he was the first Steelers rookie to accomplish that, and became the first rookie in NFL history with three receiving touchdown and a rushing touchdown in one game. The Steelers face division rival, Cleveland Browns, next week, while the Eagles face off against another NFC North opponent, the Baltimore Ravens. Will the Eagles be able to take down this top 5 Ravens team? Once again, we will see.