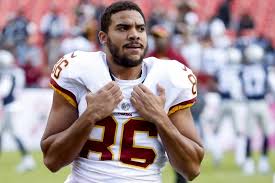 Pretty big move for the Washington Redskins as they release veteran tight-end Jordan Reed. Washington selected Reed in the third round of the 2013 draft. In 2015, Reed had his breakout season recording 87 receptions for 952 yards and 11 touchdowns. He was named to his first and so far only pro bowl in 2017. However, after his break out 2015 campaign, Reed has been decimated with concussions. He suffered his seventh during a 2019 preseason game against the Atlanta Falcons, and was placed on injury reserve after missing the first five games of the regular season. He missed the whole season and was just recently released from concussion protocol – and that’s when DC decided to release him. This saved the Redskins about $8.5 million in cap space, and along with releasing Norman, Richardson, and a couple others, the Redskins went from 20th in the league in cap space to top 10. When healthy and on the field, Reed is a top 5  tight end, and he is still a great player. You can’t help but feel bad for the guy and how he has been plagued by injuries, especially with how talented he is. Now it’s time for him to decide what his next step will be to retire due to all the concussions or hope to sign with a new team that’ll give him another shot.