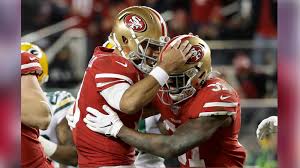 How they got here: San Francisco 49ers

The San Francisco 49ers defeated the Green Bay Packers in the NFC Conference Championship game, and advanced to their second Super Bowl in the 21st century. The last Super Bowl they played in was Super Bowl XLVII, where they lost to the Baltimore Ravens 31-34. This was the first Super Bowl the Niners had ever lost. The five Super Bowls they played in before then, were all wins against the San Diego Chargers, Cincinnati Bengals, Miami Dolphins, and the Denver Broncos twice. The 49ers, tied with the Dallas Cowboys, who have the third most Super Bowl wins with five, only behind the Pittsburgh Steelers and New England Patriots, who each have six. The Niners now could have one of the greatest turn around seasons in NFL history aftergoing 4-12 last year, and are one win away from winning the Super Bowl.

San Francisco clinched the first seed in the NFC going 13-3, beating the Seattle Seahawks Week 17. After their bye week, they first faced off against Kirk Cousins and the Minnesota Vikings in the Divisional Round of the playoffs. The Vikings had come off an upset win over Drew Brees and the New Orleans Saints in the Wild Card Round and were hyped coming into this game. Both teams started off the first quarter with a touchdown and it seemed like the Vikings were keeping pace with the 49ers. San Francisco scored one more touchdown before half time, leading the Vikings 14-10. Then the Niners defense leveled up again, completely shutting down the Vikings offense in both the third and fourth quarter of the game winning 27-10. Both Cousins and Garopollo threw one interception each, Richard Sherman getting Cousins’ and Eric Kendricks getting Garoppolos’. The Vikings made the mistake of barely utilizing Dalvin Cook who only had 9 carries for 18 yards. The 49ers front 7 caused havoc for Cousins the whole game, sacking him a total of six times. Tevin Coleman had two of the 49ers touchdowns, while Kendrick Bourne caught Jimmy G’s one touchdown pass. Jimmy G and the 49ers would now advance to the Conference Championship game to play the Green Bay Packers. YOU LIKE THAT KIRK COUSINS!

Jimmy G and the 49ers are now facing off against Aaron Rodgers and the Green Bay Packers who beat the Seattle Seahawks the week before. Back in Week 12, the Niners blew out the Packers 37-8. Now was the Packers’ chance to take revenge on the Niners, even though most thought they didn’t stand a chance once again. And boy they were right. In the first half of the game alone the 49ers shut out the Packers 27-0. The Niners ran all over Green Bay’s defense, and their defense was all over Green Bay’s offense. The Packers finally scored in the third quarter, but unfortunately for them, so did San Fran. The fourth quarter was mostly the Packers putting up garbage time points with a final score of 37-20. The 49ers scored the exact same number of points against the Packers in this game as they did when they played them Week 12. The MVP of the game was 100% Raheem Mostert. He rushed for 220 yards and all four of the Niners touchdowns. He also had six yards of receiving. On the other hand, Garoppolo did next to nothing this whole game except hand the ball off to Mostert. He went 6/8 and 77 passing yards. San Francisco also picked off Aaron Rodgers twice. Richard Sherman had one pick. This being his second of this postseason. Emmanuel Moseley had the other one. The San Francisco 49ers now are headed to Super Bowl LIV.

The 49ers are going to their 7th Super Bowl in franchise history. They are headed to Miami, Florida to face Patrick Mahomes and the Kansas City Chiefs. This Niners team has been underestimated all season long, now they are in the Super Bowl. Their elite defense lead by Richard Sherman, Nick Bosa, Deforest Buckner, Dee Ford, Kwon Alexander, and Arik Armstead will cause trouble for Kansas City. Not to mention their rushing core of Raheem Mostert, Matt Breida, and Tevin Coleman. Also having the best tight end in the league George Kittle helps as well. Jimmy Garopollo is now one win away from winning a Super Bowl his first full year as a starter.