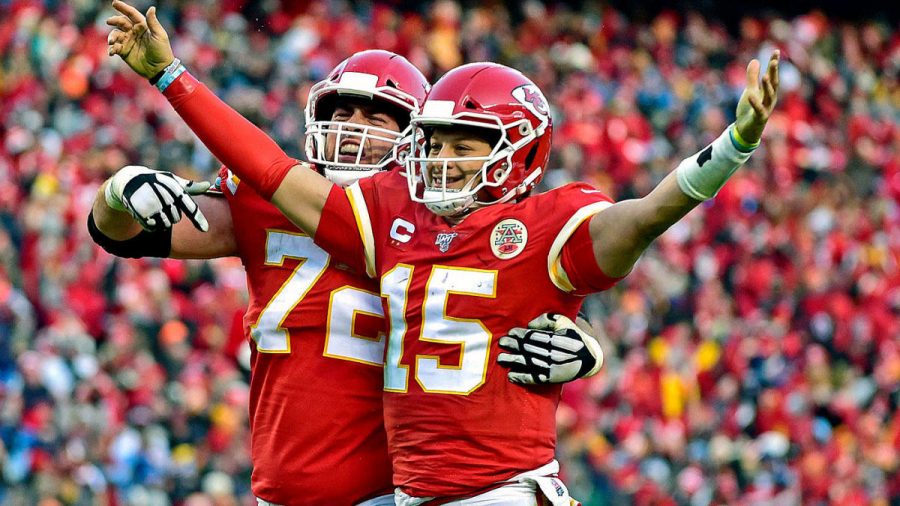 How they got here: Kansas City Chiefs

Just two weeks ago, the Kansas City Chiefs defeated the Tennessee Titans in the AFC Conference Championship game to advance to their first Super Bowl since 1970, where they defeated the Minnesota Vikings 23-7 in Super Bowl IV, winning their first Super Bowl. The Chiefs have been unsuccessful in getting back to the big game since then. They fell just short to the New England Patriots last year due to a game costing penalty caused by Dee Ford, but now, after 50 years, Chiefs Kingdom is back with a chance to win their second Super Bowl title in franchise history.

The Chiefs went 12-4 this season and clinched a first round bye in Week 17 thanks to the Patriots falling to the mighty Ryan “Fitzmagic” and the Dolphins. After a week of preparation to play in the divisional round, the Chiefs faced off against the Houston Texans in Arrowhead Stadium. The Texans had previously beaten the Chiefs back in Week 6. The game started off poorly for the Chiefs. Costly dropped passes on third downs and a punt return drop by Hill, helped the Texans keep possession of the ball more often and by the end of the first quarter the Chiefs trailed 0-21. A few minutes into the second quarter, the scored shifted slightly to 24-7, Texans on top…and then Mahomes and the Chiefs balled out the next 3 minutes. Due to the Chiefs offense finally clicking and a failed fake punt and punt return fumble by Houston, the Chiefs scored three touchdowns in 3 minutes and 23 seconds. They now trailed by only three, and by halftime they were winning 28-24.

The second half of the game, the Texans did next to nothing on offense or defense as the Chiefs scored 23 more points to win the game 51-31. Patrick Mahomes threw five TDs, three of which to tight end Travis Kelce. Running back Damien Williams also scored two rushing TDs. Mahomes and the Chiefs advanced to play the Tennessee Titans in the AFC Championship game.

Back at Arrowhead, the Chiefs now faced off against the underdog 6 seed Tennessee Titans, who, with the QB-RB duo of Ryan Tannehill and Derrick Henry took down the New England Patriots and the Baltimore Ravens. The Chiefs had fallen to this surprising Titans team back in Week 10 when they first named Ryan Tannehill the starting quarterback and benched Marcus Mariota, but that was Mahomes’ first game back from dislocating his kneecap and his team has gotten back to its usual dominant self since then. The primary key to beating the Titans was to stop Derrick Henry, and as stated by Frank Clark, they would. The game started with the Titans leading 10-0, but the Chiefs quickly responded with a touchdown. The Titans held the lead into the second quarter but the Chiefs caught up by halftime and were leading 21-17.

The third quarter was scoreless, and in the fourth quarter the Titans scored one TD while Kansas City scored two, resulting in a final score of 35-24 in a Chiefs victory. There were oddly no turnovers in this game, and probably not a surprise to anyone, Mahomes threw three touchdowns and also had an insane touchdown run as the Tennessee defense forgot how to tackle. Tyreek Hill was at the receiving end of two of those passing TDs and Sammy Watkins had the other. Frank Clark kept true to his word as the Chiefs defense held Derrick Henry to just 69 yards of rushing. It also didn’t help the Titans that when the Chiefs took the lead, they forced the Titans to throw the ball with Tannehill more often since they were behind later in the game and running the ball would burn clock. Andy Reid and the Chiefs made the Titans have to try to beat them solely relying on Tannehill, and they knew they couldn’t get it done. Kansas City now advances to Super Bowl LIV.

The wait is finally over for Kansas City as Patrick Mahomes has brought them back to the Super Bowl. He has scored a total of nine TDs this postseason and a whopping total of zero interceptions. The team had scored 86 points in total in these last two playoff games. They now travel to Miami to face the San Francisco 49ers. This will be a tough team to beat with the unstoppable offensive trio of Patrick Mahomes, Tyreek Hill, and Travis Kelce. They have an up-and-coming defense lead by Tyrann Mathieu “the Honey Badger,” Chris Jones, and Frank Clark. Coach Andy Reid is finally one win away from his first Super Bowl win, and a fast food buffet at the White House.