Girls of Thrones: Review of Episode 1

Game of Thrones season premiere, the very last, left viewers on a feel-good note. The entirety of the episode was spent establishing where all the characters were in the world of Westeros, any changes in relationships, and revealing strategies that will lead to greater conflict later in the season. Below are two BASH CUB Staff Writers’ takes on the episode! 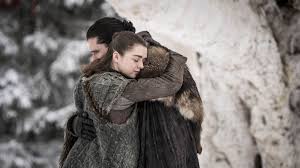 “The Calm Before the Storm”

The entire episode felt like something awful was going to happen. It was way too good of a feel-good episode, but I guess it’s the calm before the storm. I almost expected someone major to die at the very end of the episode, as a way of starting the season out with a bang.

However, I think this episode was phenomenal. Definitely an amazing start to the last season. It set up so many plot points and conflict for later in the season.

Jon’s return to Winterfell was definitely bittersweet, with everyone so grown up now and Bran no longer Bran but the Three-Eyed Raven. The threat of the White Walkers definitely dampened it, but overall the procession back into Winterfell was a fitting parallel to the pilot episode.

I have to admit, knowing Jon’s true heritage kind of ruins the relationship with Daenerys for me. But at least they’re carrying on the Targaryen tradition of incest, right? They work very well together and look great, but the whole aunt/nephew thing is too weird in my opinion. I’m sure Jon will agree, now knowing the truth.

The pushback from the North is honestly so expected; it’s been a major theme of the North to always resist change and outsiders. Hopefully they forfeit to Jon’s pleas, though. The North can’t really afford to be disjointed, with the Night King bearing down on them and Cersei planning to backstab them.

Now the dragons on the other hand were incredible; the CGI is honestly just perfect. Seeing the landscape and the joy on Jon and Dany’s faces was a phenomenal decision, providing what is sure to be a contrast to the despair of the rest of the season.

“That a beloved character didn’t die was as shocking as if one had.”

The first episode of this new season had the viewers sitting at the edge of their seats for the whole hour. At this point, viewers expect anything to happen, and the fact that a beloved character didn’t die was as shocking as if one had. Although this didn’t happen, many important scenes revealed information that could foretell the future.

Upon Jon and Daenerys’s arrival to Winterfell, the North is fully aware that Jon has given up his title as King of the North and bent the knee to Daenerys. The Northern houses are not pleased as the young Lady Lyanna Mormont wants to return home. In addition to this, Sansa is also irritated. This to me is puzzling. I fully understand that it was a lot to for Jon to ask of them to put full faith in a complete stranger who’s dad was insane. I also understand that Sansa is most likely jealous of Daenerys based on the knowledge that Sansa has wanted to be Queen since Season 1 when she was supposed to marry Joffrey Baratheon (who was mentally insane). But, why would anyone in their right mind refuse two armies and two full-grown dragons. Let’s be real — Daenerys is the best chance the living has for defeating the Night King’s Army of the Dead.

The North, specifically Sansa, disapproving of Daenerys is also very frustrating because Jon and Daenerys are in love, which I’ve been waiting for since Season 1. Although extremely unlikely, I would like to see them on the iron throne by the series finale. This dream is also pretty unrealistic because of the information Sam told Jon. With Jon being the son of Rhaegar Targaryen and Lyanna Stark, this makes him the true heir to the iron throne. To me, throughout the show, Daenerys has proven that although she is kind, loving and caring, she is also very selfish. It is obvious that she has one goal and one goal only — to be the Queen of the Seven Kingdoms. My fear is that if she finds out the truth about Jon, she will come extremely jealous, causing their romantic relationship to end.

Dating an aunt/nephew is a little weird and pretty gross, but that doesn’t come close to comparing to the incest between Cersei and Jaime. I bring this up because one of the most intriguing situations in this season is the unborn baby in Cersei. The viewers know that the dad is Jaime, however, Euron Greyjoy sleeping with Cersei could bring future complications. In Season 7, Cersei tells Jaime about the baby and that she will admit that the baby is his. But in this past episode, Euron says, “I’m going to put a prince in your stomach”, raising the question: Will Cersei claim that the baby is Euron’s and not Jaime’s?

Also, will Cersei go back on her word to help protect the living against the dead? I don’t think so. She ordered Bronn to murder his former (and hopefully present) friend, as well as Cersei’s brother, Tyrion Lannister. She is even with her son, Joffrey, and Ramsay Bolton.

The last scene shows Brandon Stark and Jaime Lannister seeing each other for the first time since the very first episode of Season 1. Bran is paralyzed because Jaime pushed him from a tall tower in Winterfell after realizing Bran was watching him and his sister, Cersei. What does Bran want with Jaime? It’s a perfect Game of Thrones cliffhanger — totally unpredictable.