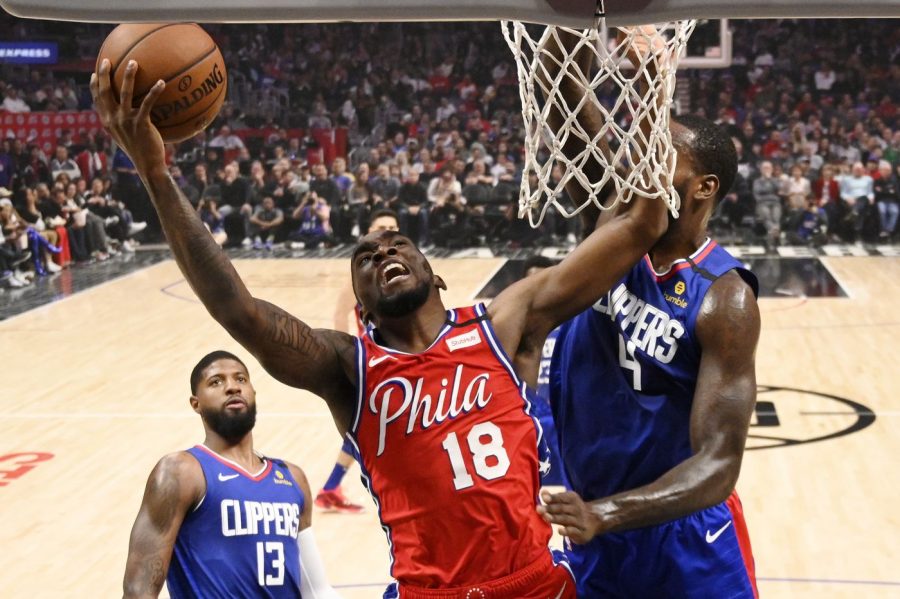 Sixers’ PG Shake Milton makes a contested layup in the Sixers’ 136-130 loss to the Clippers on Sunday (via The Philadelphia Inquirer).

The Sixers’ road woes continued over the last 2 games as the team dropped both games in LA: one to the Clippers on Sunday, and the other to the Lakers on Tuesday. It shouldn’t necessarily come as a surprise, given that 3 of the usual starting 5 are injured, and the Sixers have struggled historically when on the road this season.

The Sixers kicked off the road trip on Sunday vs the Clippers, which actually made for an interesting game. Without Ben Simmons, Joel Embiid, and Josh Richardson, the Sixers came into the game badly shorthanded. However, they actually put up a considerable fight. The Sixers jumped out on the Clippers, outscoring them 39-34 in the first quarter of action. In the 2nd quarter, however, the Clippers outscored the Sixers 36-33, giving the Sixers a narrow 72-70 lead at halftime. A big 3rd quarter for the Clippers gave them the lead, as LA led 108-96 going into the 4th quarter. The Sixers didn’t roll over and die after the brutal 3rd quarter, however, as they actually outscored the Clippers 34-28 in the final quarter. It wasn’t enough to compensate for the 3rd quarter implosion, as the Sixers fell 136-130 in a high-scoring affair, but the fight despite being shorthanded was at least some compensation for yet another road loss. The performance of Shake Milton in the game was also an impressive point to note. Milton had done a nice job in Simmons’ place in the starting 5, and on Sunday he went off, scoring 39 points, including 7 3-pointers, with 3 rebounds and 5 assists against the Clippers. He had 26 points in the first half alone, making for an impressive showing.

On Tuesday night, the Sixers had another tough task in facing the Lakers. The Sixers handled the Lakers with apparent ease back in January when the Lakers played the Sixers in Philly, just a day before the tragic loss of Kobe Bryant. However, the Sixers were at full strength and played on their home court, while on Tuesday, they were forced to play one of the best teams in the league with a banged up roster on the road. The Sixers didn’t appear fazed by the odds, as they came out of the gate outscoring LA 35-28 in the first quarter. It pretty much went all downhill after that though. In the 2nd quarter, Lakers’ Anthony Davis caught fire to lead to a 37-19 2nd quarter outburst, giving the Lakers a 65-54 halftime lead. Another strong quarter in the 3rd extended their lead to 96-80, effectively burying the Sixers. The Sixers outscored LA by 3 in the 4th quarter, but 3 is far from enough to erase a 16-point deficit, as the Lakers locked down the Sixers 120-107. While Shake Milton had stepped up in the previous handful of games, Glen Robinson stepped up as the Sixers’ leading scorer on Tuesday night, dropping 25 points with 4 rebounds and an assist.

After the stint in LA, the Sixers drop to 6th in the East at 37-25, far from the pre-season expectations. And they’ve still got 2 more games out west before returning home.