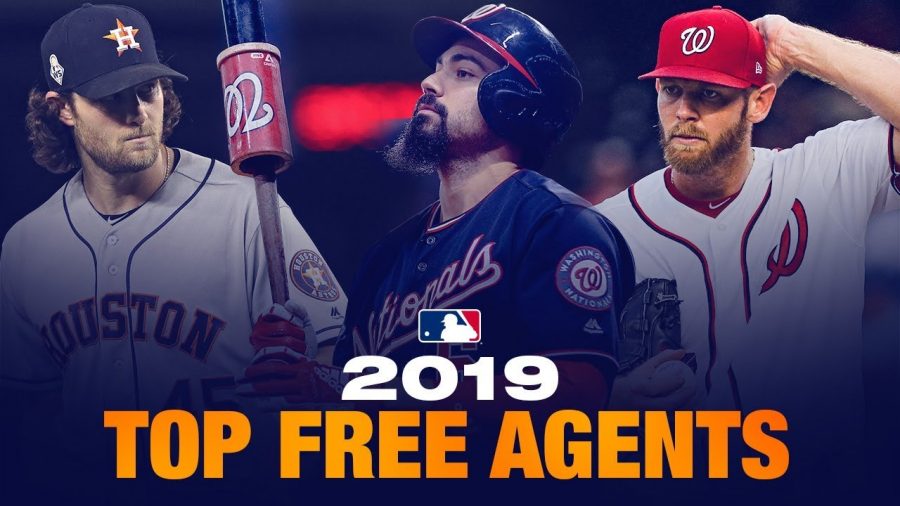 In direct contrast to the 2018 off-season free-agency, the 2019 free-agency class made their decisions quickly, and with authority. Last year, it took top-talents Manny Machado and Bryce Harper until February to sign with the Padres and Phillies respectively. And while the contracts of Machado and Harper were record breaking at the time, the contracts recently signed in the last 2 weeks made those contracts look small in comparison.

The first major deal to break the ice in free agency came on December 2nd, as Mike Moustakas signed with the Cincinnati Reds on a 4 year, $64 million contract. He spent all of 2019 as the 3rd baseman for the Milwaukee Brewers after being traded there from Kansas City in 2018. For the Reds, he’s expected to play 2nd base, as Eugenio Suarez has emerged as a fantastic 3rd baseman for Cincinnati.

The next major move was made by the Atlanta Braves, as they addressed their starting pitching needs by signing veteran lefty Cole Hamels. Hamels, the former ace of the rival Philadelphia Phillies, was traded to the Texas Rangers in 2015, before being traded again to the Chicago Cubs in 2018. He spent the entire 2019 season in the starting rotation for the Cubs, posting a 3.87 ERA across 27 starts for 141.2 IP. The 4X All-Star and former NLCS and World Series MVP for the Phillies will now be spending the next season with the division rival Braves on a 1 year, $18 million deal.

On the same day the Braves made the move to acquire Cole Hamels, the rival Phillies also made a big move to bolster their struggling starting rotation. The Phillies signed RHP Zack Wheeler to a 5-year, $118 million contract, giving the Phillies two strong righties at the front of their rotation with Aaron Nola. Wheeler, like Hamels, is now donning the jersey of a former division rival, as Wheeler has been a member of the New York Mets since his debut in 2013. Since a rocky 2017 season, Wheeler has become a consistently strong starting pitcher, posting a 3.31 ERA in 2018, and a 3.96 ERA in 2019, in the same rotation as aces Jacob deGrom and Noah Syndergaard. He’ll likely be the Phillies’ #2 starter behind Aaron Nola, and ahead of Jake Arrieta, Zach Eflin, and whichever other starters can prove their worth in the Phillies’ constant starting pitching carousel.

A few days after Zack Wheeler and Cole Hamels signed for the Phillies and Braves respectively, another NL East team got in on the action, as the Washington Nationals looked to retain pieces from their 2019 World Series Champion roster. On December 6th, the Nationals re-signed Howie Kendrick on a 1-year deal worth $4 million for the 2020 season, plus another possible $2.25 in a 2021 option. Kendrick became a sort of secret weapon for the Nationals once the calendar reached October, coming up with some of the clutchest at-bats in the postseason. The most notable of these was a tie-breaking, extra innings grand-slam to eliminate his old team, the Dodgers, in the NLDS. In the World Series, he also hit a back-breaking home run off the right field foul pole, to provide the final push of momentum the Nationals needed to capture their first World Series title in franchise history.

The Nationals’ addressed a smaller piece of their offseason plan by re-signing Kendrick, but their biggest objective was re-signing one of their aces in Stephen Strasburg. And they did just that, re-signing Strasburg to  a 7-year, $245 million deal to stay in DC. Strasburg is coming off arguably his most notable season as the Nationals’ ace, winning the World Series and claiming World Series MVP honors with the Nationals, 10 years after being drafted by the Nationals in 2009. Strasburg has a career 3.17 ERA, forming a 2-headed monster at the top of the Nationals’ rotation with Max Scherzer, accompanied by #3 starter Patrick Corbin.

On December 10th, the Phillies continued to make moves in an effort to reclaim the NL East throne for the first time since 2011, making a splash by signing Didi Gregorious to a 1-year, $14 million deal. The news comes following the Phillies’ decision to non-tender infielders Maikel Franco and Cesar Hernandez, leaving gaps in the Phils’ infield at 2nd and 3rd base. By acquiring Gregorious, the Phillies will be able to play him at shortstop and move Jean Segura to 2nd base, while adding a strong bat to an already dangerous lineup, featuring Andrew McCutchen, Bryce Harper, Rhys Hoskins, Jean Segura, and JT Realmuto. Unless the Phillies make another move before Opening Day, we can expect them to start Scott Kingery at 3rd base, given a strong showing in the hot corner in 2019. It’s a bit of a gamble to hope he’ll re-sign beyond 2020, but it’s a solid move to bolster the Phillies’ infield defense and lineup.

The most anticipated move in the off-season, besides Stephen Strasburg, was the decision Gerrit Cole would make. With Strasburg re-signing with Washington for 7 years and $245 million, Cole’s new contract was going to be record breaking, and sure enough, it was. The Yankees managed to land the former Pittsburgh and Houston ace for a staggering 9 year deal, worth a record breaking $324 million. Cole will join the Yankees’ rotation that includes James Paxton, Luis Severino, and JA Happ, all who arguably underperformed in 2019. The Yankees will hope Cole can help stabilize the rotation across the board, as they’ve fallen short of expectations in the last 2 years especially.

The 3 major free agents were easily Gerrit Cole, Stephen Strasburg, and Anthony Rendon. After Cole and Strasburg signed with the Yankees and Nationals, Rendon was the final one to strike a deal, signing a 7 year, $245 million contract with the Los Angeles Angels of Anaheim. It’s a surprising move in several ways. While the length and amount of money was expected, the location is one leaving a lot of people scratching their heads. The Angels just extended star Mike Trout this past season, practically guaranteeing he’ll spend his entire career with the Angels. The Angels, who’ve defined mediocre for the last 4 years at least, now shell $245 million on Rendon. Sure, he provides another spark in the lineup to help Trout, but outside of Trout and Rendon, there’s still a lot to address with a lot less money now. The most glaring of these issues remains the pitching, specifically the starting rotation. It’s genuinely feasible to believe that the Angels’ pitching is cursed, as they’ve struggled to develop any solid pitching, and to top it off, one of their most solid starters, Tyler Skaggs, passed away unexpectedly last season. For a team with more issues than just production at 3rd base, it’s a questionable move. For Rendon, he decides to go for the money rather than competition. To be fair, he does have a ring now as part of the 2019 champion Washington Nationals, but you have to wonder whether or not he’ll play competitive baseball with Anaheim for the next 7 years.