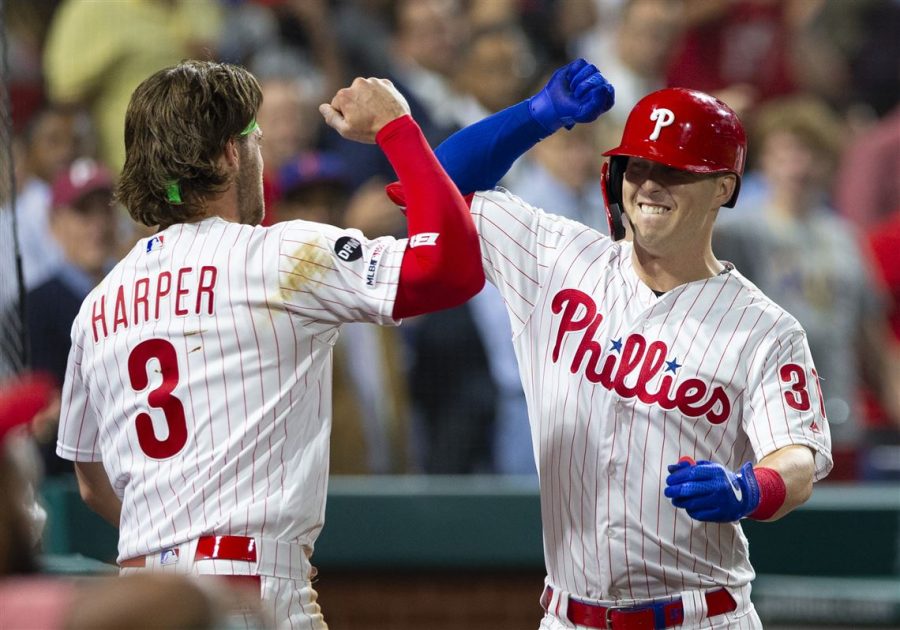 The Phillies’ Bryce Harper celebrates with Corey Dickerson after Dickerson hit a 2-run home run against the Pittsburgh Pirates on Monday night.

It was far from pretty, but with a playoff chance still just barely out of reach, the Phillies need every win they can possibly get. The Phillies won the series 2-1 over the Pirates in arguably the worst 3-game display of baseball ineptitude in recent memory.

Coming off a series loss to the lowly Marlins, the Phillies absolutely had to get a clean game 1 win against the badly struggling Pirates. They got the win, but missed the clean part. The Phillies broke the scoreless tie first, as Brad Miller lifted a 2-run homer to give the Phillies the 2-0 lead in the 4th inning. Between the 5th and 7th inning, however, the Pirates would counter with 4 runs of their own, leading 4-2 going into the 8th. The Phillies answered right back in the 8th, scoring 3 runs on homers by Harper and Dickerson, giving the Phillies a 5-4 lead going into the 9th. With closer Hector Neris on the mound, the Pirates’ Josh Bell tied the game with a no-doubter solo-homer to make it a 5-5 game. The Phillies looked like they’d be able to recover quickly and get the walkoff in their half of the 9th, loading the bases with 1 out for Rhys Hoskins and Bryce Harper. However, Hoskins’ struggles continued as he popped up, and Harper struck out despite having worked a 3-1 count, sending the game into extra innings in frustrating fashion. In the bottom of the 11th inning, Sean Rodriguez emerged as an unlikely hero, roping a solo, walk-off homer to left field against his former team. The walk-off win didn’t suppress the frustration of the team for long, as Rodriguez turned from a hero to a villain overnight, after he called out Phillies fans for being “entitled,” in response to their booing tendencies during a postgame interview.

The frustration from the night before, despite the winning outcome, seemed to boil over into game 2 on Tuesday night. As anticipated, Sean Rodriguez, who started the game at 3rd base, was greeted to hearty boos from the Phillies fans in attendance. The tension was only compounded as the Pirates jumped out to a 2-0 lead in the first inning, as Bryan Reynolds launched a 2-run homer before Phillies’ starter Drew Smyly could even record an out. The Phillies battled back, scoring a run in each of the 2nd, 3rd, and 4th innings, to take a 3-2 lead into the 5th. The Pirates came back with 2 of their own with yet another 2-run homer in the 6th inning, giving the Pirates a 4-3 lead. It wouldn’t last long, as Phillies’ Logan Morrison hit a solo-homer to tie the game at 4-4. From their, both bullpens held their ground, until things got dicey for the Phillies in the top of the 9th. After recording the 1st out, Hector Neris started to lose his command, walking back-to-back batters to give the Pirates runners on 1st and 2nd with 1 out. Neris then got Kevin Newman to ground out to 2nd base, which looked to be a tailor-made double play to keep the game tied. The only problem is Hoskins botched the catch at 1st, failing to complete the double play and allowing the go-ahead run to score for the Pirates. The Phillies were then forced to go into the bottom of the 9th down 5-4. They showed little fight, going down 1-2-3 as they fall apart in the 9th inning for the 2nd straight night.

The Phillies’ bats took out their frustrations in a big way in game 3, clobbering the Pirates for 12 runs. The game started off like the previous 2 games in the series, as the Phillies jumped to a 3-0 lead, only to have the lead trimmed back to just 3-2 as the Pirates countered in the 4th. The Phillies exploded in the 5th, however, as they blew the game open to make it an 8-3 advantage. They would tack on 4 more over the next 3 innings, including a solo homer for JT Realmuto. The big story of the night is the production of Rhys Hoskins, who’s been on a historic skid in the month of August. He finished the night 2-4, as he batted 5th tonight as opposed to leading off. Hoskins tripled and doubled in his first 2 at-bats, scoring a run and driving in a run in the process. If the Phillies want to make a serious playoff push, they need him to be producing again. Vince Velasquez had a solid outing, allowing 2 runs on 5 hits in 5 innings, striking out 5 and not allowing a walk. It’s another step in the right direction and the kind of consistency the Phillies will desperately need down the stretch.

The Phillies now sit at 69-63, 2 games behind the Cubs for the 2nd Wild Card spot. They’re looking at a crucial 3-game series on deck as they host the New York Mets, a very different team now than the Mets they swept out of Philly in a 4-game series back in June. The schedule only gets more difficult from here, and the Phillies will have to rise to the occasion if they’re going to make the postseason.