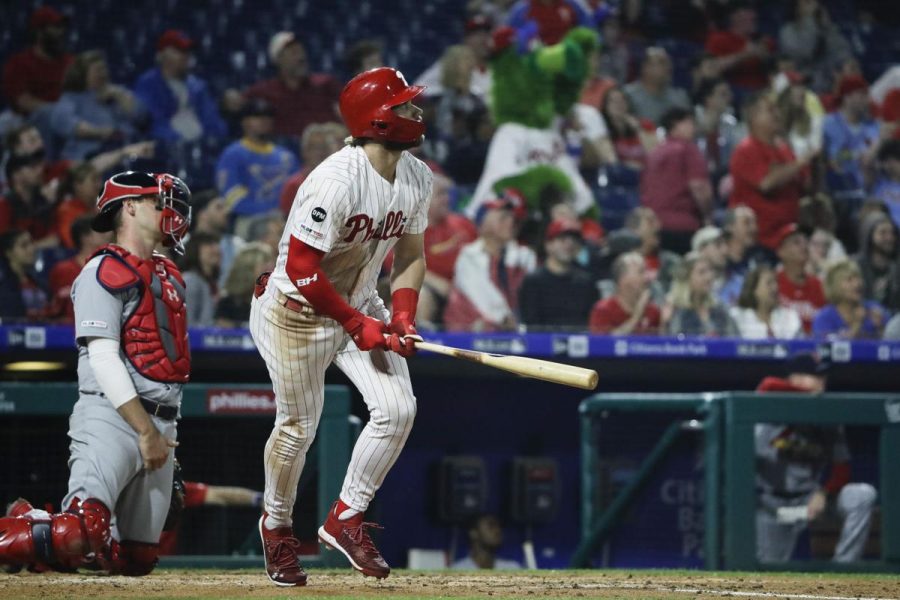 Phillies’ Bryce Harper watches his 2-run homer in the 3rd inning of the Phillies’ 11-4 game 2 win on Wednesday night. He finished the night with a single, double, and homer.

The Phillies seem to have hit their stride as of late, as they rolled right over the Cardinals in their recent series at Citizens Bank Park, winning the series 2-1.

Game 1 was forced to wait through a rain delay as a series of storms kept most of the state under tornado threats. After waiting out the storms, the game looked just about as ugly as the weather to start, as Nick Pivetta quickly gave up 2 home runs in the first inning, putting the Phillies in a 3-0 hole after 1 inning. Luckily, however, Pivetta seemed to settle in after that, not allowing any more runs to cross the plate. It’s a good sign, considering it’s his first start since being demoted to AAA. He finished the night after allowing 3 runs on only 3 hits through 5 innings, not a bad start with the exception of those 2 mistake pitches that left the yard. A 3-run deficit is no problem for the Phillies’ lineup to overcome when everything is clicking, and the offense had just enough in it to stage a comeback win. In the 3rd inning, Bryce Harper made it a 1-run game with a 2-RBI double. It would be just the start of a red-hot series for Harper. An inning later, Cesar Hernandez continued his strong recent stretch, launching a go-ahead, 2-run homer off the facade of the 2nd deck in right field. The Harper double and Hernandez homer would prove to be just enough, as the bullpen locked it down yet again, securing the 4-3 Phillies’ game 1 win.

The weather to start game 2 was somehow even worse than in game 1, as tornadoes threatened the city and several lightning bolts struck near Citizens Bank Park. The explosive weather foreshadowed the Phillies’ upcoming performance following the hour-long delay. The Phillies got on the board right away, as Hernandez continued to dominate at the plate, driving in 2 runs on a 1st inning double. In the 3rd inning, Bryce Harper cranked a 2-run homer to left center for his 10th of the season, further signalling that he’s starting to heat up again. It was in the 5th inning that the Phillies really blew it open, however, as they launched 3 homers in the inning for 5 more runs. Scott Kingery got it started with a 2-run shot, which Maikel Franco promptly followed up with a homer of his own, on the very next pitch. After Aaron Nola got on base to turn the lineup over, Andrew McCutchen got a hold of a pitch and deposited it in the left field seats, giving the Phillies a commanding 11-1 lead. The performance of pitching often goes unnoticed in slugfests like this, but Aaron Nola’s start shouldn’t be ignored. He continued to make progress towards regaining his 2018 form on Wednesday night, allowing just 1 run on 4 hits, while striking out 8 over 7 innings of work. The bullpen did give up a few, but there was plenty of room to work with, as the Phillies secured the series win easily with an 11-4 drubbing.

For the 2nd series in a row, the Phillies have gone into game 3 with a chance to lock up a sweep, but for some reason, can’t seem to lock the door on the way out. Unfortunately, game 3 continued a recent, and troubling trend for Jerad Eickhoff: trouble with the longball. It’s not that he’s pitching poorly, it’s that his mistakes are being taken advantage of every single time. It’s a command issue that we know he’s capable of fixing, it’s a matter of when. He’s missing in the strike zone, and hitters aren’t missing it. He didn’t walk anyone on Thursday afternoon, but gave up 3 homers. He still gave the Phillies distance in the start, going 6.1 innings, which is big for a team whose bullpen is dropping to the injury list like flies. But in those 6.1 innings, he allowed 4 runs on 8 hits, on a day when the Phillies’ offense was struggling to score despite numerous opportunities. The Phillies only went 2-9 with runners in scoring position, while stranding 7 baserunners. The Phillies tried to stage a comeback, scoring 2 in the 8th to make it a 5-3 game, but Cardinal’s closer Jordan Hicks overwhelmed the Phils, setting them down in order in the 9th, as the Cardinals narrowly avoided the sweep, beating the Phillies 5-3.

Bryce Harper had himself an incredible series, which is an exclamation point on a hot 15-game stretch. In that stretch, he’s batting .333 with 9 doubles, 3 homers, 16 RBI, all the while raising his batting average 33 points, up to .243 on the year. It’s not great, but it’s heading in the right direction when the Phillies need it most.

The Phillies will need everything to click in the upcoming stretch of games, as they begin a 6-game road trip against the Dodgers and Padres. The Dodgers have the best record in the National League and look just about unstoppable, powered by an MVP type season from Cody Bellinger. They’re 37-19, 1st in the NL West and 1st in the NL overall. The Phillies, meanwhile, are 32-23, 1st in the NL East and 2nd in the NL overall. While the Dodgers series is clearly a huge one for the Phils, the Padres aren’t the easy win they once were. They’ve had the Phillies’ number in years past, and this time they’re above .500 and 2nd in the NL West, something we haven’t heard of in a long time. It’ll be a competitive series out west, starting on Friday night in Los Angeles.