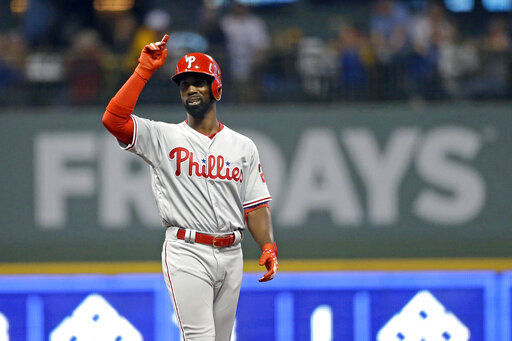 Phillies’ Andrew McCutchen stayed hot in the leadoff role, with a leadoff home run in game 2 of the series as the Phillies won the series 2-1.

Phillies Wrap Up Road Trip With Series Win In Milwaukee

The Phillies made another strong statement over the holiday weekend, as they followed up a series split with the Chicago Cubs by winning the series against the Milwaukee Brewers 2-1.

Game 1 started out looking like a replay of the previous series between the teams, as the Brewers chased Phillies’ Jerad Eickhoff out of the game by tagging him for 4 runs on 5 hits, 2 of the hits being home runs, in only 3 innings of work. However, the Phillies’ bats bailed them out of trouble, while the bullpen locked the Brewers down for 6 innings. Bryce Harper drove in 2 runs, while Rhys Hoskins, Maikel Franco, Andrew McCutchen, and Scott Kingery drove in the other 4 runs for the Phillies. Hoskins broke out of his recent slump in the game, launching a solo homer in the 7th inning. Hector Neris locked down the save by striking out the side in the 9th, securing the Phillies’ 6-4 victory.

Andrew McCutchen started out game 2 on the same note the Phillies left off on the night before, crushing a leadoff homer to start the game. The home run trend was contagious for the Phils, as Rhys Hoskins, JT Realmuto, and Cesar Hernandez would all hit homers by the end of the game, accounting for 5 of the Phillies’ 7 runs. Jake Arrieta didn’t need much offense to back him up, as he had arguably one of his best starts yet, as he allowed 2 runs on 5 hits over 8 innings of work, striking out 8 and only walking 1. At one point, he retired 16 consecutive batters, a streak that was broken by a solo home run by Mike Moustakas in the 7th inning. Jose Alvarez shut down the 9th inning, and the Phillies secured the series win with a 7-2 victory.

The Phillies got a taste of their own medicine in the final game of the series, as they were shut down and shellacked 9-1 as the Brewers avoided being swept. Zach Eflin’s start wasn’t sharp by any means, as he allowed 3 runs on 6 hits in only 3.2 innings, while being tagged for 2 home runs. His start was also apparently shortened due to illness, causing the Phillies to use Vince Velasquez out of the bullpen for the first time since his injury, after using Alvarez to get 1 out. Velasquez’ outing was disastrous, as he got lit up for 4 runs on 5 hits in just 0.2 innings, including 2 home runs. It didn’t help the Phillies that Brewers’ starter Brandon Woodruff was locked in either, as he carried a perfect game into the 6th inning before Andrew Knapp’s solo home run. The home run was the only hit the Phillies could manage all day, as Woodruff shut down the Phillies, striking out 10 in 8 innings of work.

The Phillies completed a strong recent stretch of games, despite ending on a brutal note. They have Memorial Day off, before beginnning a homestand with a series against the St. Louis Cardinals, who they had a strong showing against in their last series in St. Louis. The Phillies are 31-22 and need to keep winning, as their lead over the Braves for 1st in the NL East remains tight at 1.5 games. The Phillies have the 2nd best record in the National League after the recent road-trip, trailing only the red-hot Dodgers.