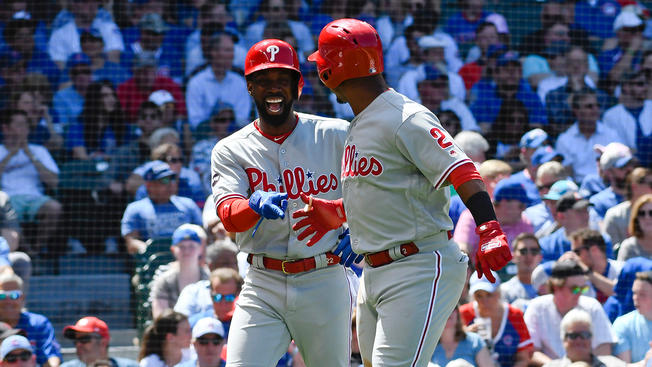 Phillies’ Andrew McCutchen and Jean Segura celebrate after Segura’s 2-run homer in the Phillies’ 9-7 win over the Cubs on Thursday.

With as hot as the Chicago Cubs were before their series against the Phillies at Wrigley Field, I suppose anything besides getting swept would’ve been a win for the Phillies. The Phillies made the series with the Cubs extremely competitive, as the only decisive Cubs win was in game 3 of the 4 game set. At the end of the series, the Phillies and Cubs split the matchup at 2 wins each.

Game 1 was an indication of how competitive the series would be, as the Phillies pulled off a big win in 10 innings. Coming away with the win was huge, as the Phillies had a 3-1 lead going into the 8th inning, but watched the lead collapse, as they found themselves behind 4-3 going into the 9th inning. However, the Phillies wouldn’t fall that easily, as Jean Segura fought off a single over Anthony Rizzo’s head to score Maikel Franco, tying the game at 4. In the 10th inning, JT Realmuto came up clutch with a solo homer, and the bullpen held on to preserve the 5-4 win. Cesar Hernandez had a big game again, going 3-5 with 2 RBI, and Realmuto, along with the game-winner, went 2-5 with 2 RBI as well.

In game 2, the competitive edge of the series continued, but this time the Cubs got the last laugh, coming from behind to walk-off in the bottom of the 9th inning, 3-2. Andrew McCutchen accounted for all of the Phillies’ offense, going 1-4 with 2 RBI. But that was all the Phillies could manage, and it came back to haunt them, as the bullpen couldn’t hold it down, allowing Cubs’ Javier Baez to walk off on the Phillies, securing the 3-2 final.

Game 3 saw plenty of offensive production from the top of the Phillies’ lineup against former Phillie Cole Hamels, but unfortunately, it didn’t translate to many runs, and couldn’t keep up with Chicago’s home-run onslaught, as the Phillies fell 8-4. The Phillies 1-3 batters had a big night; McCutchen – 3-5, 1 RBI, 2 runs; Segura – 2-4, 1 run; Harper – 3-5, 1 run.  Phillies’ pitcher Cole Irvin, unfortunately, got into a lot of trouble with the home run. It’s a shame, because he looked great with the exception of a handful of pitches, and the Cubs made him pay on every pitch he missed. An Anthony Rizzo 3-run homer, and an Albert Almora grand-slam ultimately downed Irvin in only 4.2 innings, tagging him for 7 runs on 7 hits.

Game 4 was a good turn-around from the game 3 home-run-derby, as the Phillies themselves hit the ball well, en route a 9-7 win to earn the series split. JT Realmuto continued his solid hitting at Wrigley with a homer that cleared everything, landing on Landsdale Street behind the left field bleachers. Jean Segura had a great afternoon as well, going 2-5 with a 2-run homer. McCutchen stayed hot, going 2-4 with 2 RBI. Aaron Nola was strong in the start, although not dazzling, going 5.1 innings and allowing 3 runs on 4 hits, striking out 6 and walking 4. The walks are still something to work on, but it was enough for the win. The bullpen made it interesting, however, as the likes of Pat Neshek and Hector Neris ran into some trouble, Neshek especially. He surrendered 3 runs on 3 hits, 2 of them home runs, in only 0.2 innings. Hector Neris came in for the 4-out save, and allowed a run to make it an interesting game, but ultimately shut the door on the Phillies 9-7 win.

The Phillies are now 29-21, remaining atop the NL East, but the Braves have hung around to limit the breathing room, only 1.5 games behind the Phils. It doesn’t get much easier from here, as they move on for a rematch with the Milwaukee Brewers up next.