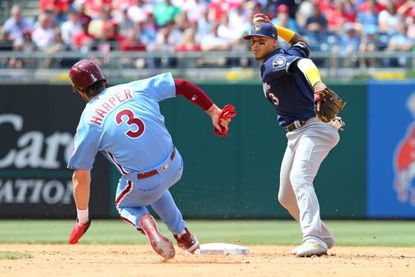 Phillies’ Bryce Harper is forced out as the Brewers turn a double play. The Brewers defeated the Phillies 11-3 on Thursday afternoon.

It definitely was a series to forget for the Phillies, who lost their 3rd series of the season with an 11-3 drubbing by the Milwaukee Brewers in game 4 on Thursday. The series was expected to be tightly-contested, between two top teams in the National League, but the Brewers flat out dominated the Phillies, with the exception of the Phillies’ game 1 win.

The Phillies’ looked like they could be legitimate competition for the Brewers in game 1 of the series, as they fought back to win it 7-4. The game is much more a testament to the Phillies’ lineup than their pitching, as Aaron Nola struggled yet again, only lasting 3 innings, allowing 3 runs, 5 hits, 3 walks, and striking out 3. That being said, the Phillies a year ago probably would’ve lost this game. But the lineup battled back, eventually breaking it open for good late in the game. Cesar Hernandez helped the cause by going 2-3 with a 2-run homer in the 5th inning. The bullpen locked it down for 6 innings too to keep the Phillies in the game.

The Phillies now sit at 24-19, and despite the skid, still remain on top of the NL East. However, their lead over the 2nd-place Braves has shrunk to just 1.5 games.