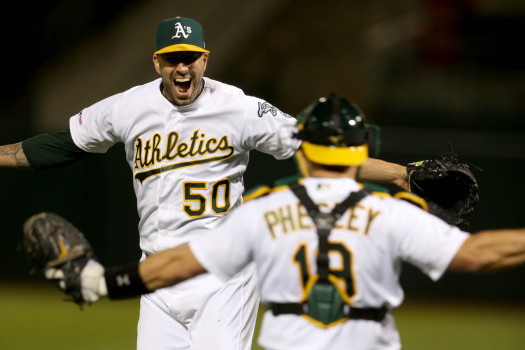 OAKLAND, CALIFORNIA – MAY 7: Oakland Athletics starting pitcher Mike Fiers (50) and catcher Josh Phegley (19) celebrate their no-hitter game against the Cincinnati Reds in the ninth inning of a MLB game at the Oakland-Alameda County Coliseum in Oakland, Calif., on Tuesday, May 7, 2019. The A’s won 2-0.(Ray Chavez/Bay Area News Group)

The feat is unexpected, as Fiers isn’t generally noted as one of baseball’s elite, and his ERA of over 5 certainly isn’t dominant. And recently, the Reds’ bats have looked pretty solid. Nonetheless, Fiers put together a spectacular outing against the Reds, a 131 pitch effort. The only blemishes to the no-no were 2 walks by Fiers and an Oakland error.

The no-hitter is the 300th in baseball history. With Fiers’ gem, the Oakland A’s have throw no-hitters in back-to-back seasons, with Sean Manaea tossing a no-no in 2018.