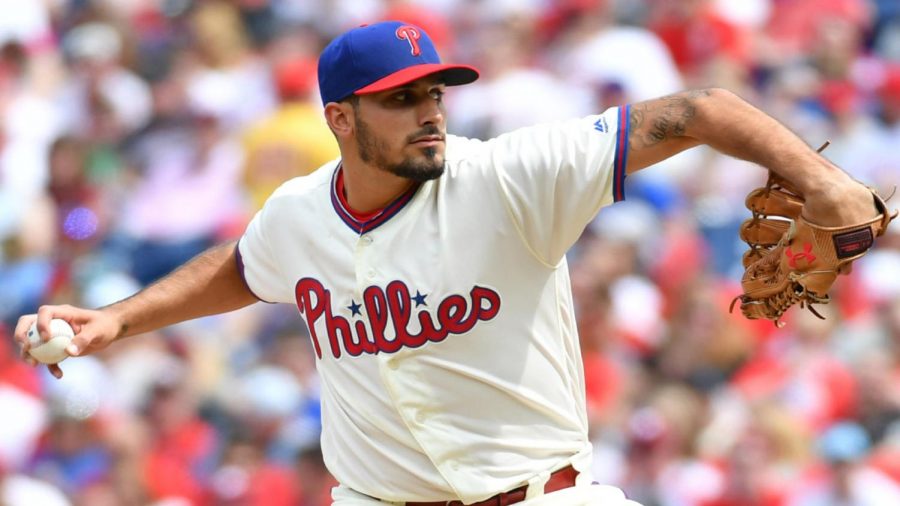 Phillies’ starting pitcher Zach Eflin held the Nationals to 1 run on 4 hits over 7 dominant innings, as the Phillies beat the Nationals 7-1 on Sunday.

With the exception of a bullpen breakdown in game 2 of the series against the Washington Nationals, the Phillies appear to have gotten back on track with a weekend series win over their division rivals.

Game 1 was the only game that didn’t feature especially high scoring, as the Phillies took game 1 by a final score of 4-2. Jerad Eickhoff set the tone with another strong outing, allowing only 1 run on 3 hits through 5 innings, while striking out 7. Another great start in Eickhoff’s much anticipated comeback to the big leagues. The Phillies’ offense wasn’t clicking much to back Eickhoff up, however, as the Phillies trailed 2-1 going into the bottom of the 6th. With one swing, Rhys Hoskins came up clutch yet again, driving a 3-run homer into the seats to give the Phillies the 4-2 win.

Game 2 was a frustrating back-and-forth battle that quickly became a battle as to whose bullpen is worse. The Phillies were down 5-3 going into the bottom of the 7th inning, before staging a 5-run onslaught to take an 8-5 lead. However, in the very next inning, the Phillies’ bullpen crashed and burned, allowing the Nationals’ to score 4 in the inning, taking a 9-8 lead. Kurt Suzuki continues to haunt the Phillies, as his 3-run homer contributed to the 4-run inning. In the 9th, Nats’ Victor Robles’ solo homer added insult to injury, giving the Nationals a 10-8 win.

In game 3, the Phillies finally seemed to click on all cylinders on a dreary day in Philadelphia. Zach Eflin was absolutely dominant again, following up his complete game shutout against the Marlins with a 7 inning, 1 run, 4 hit performance to knock off the Nats, and give his bullpen a much needed break. The offense finally clicked too, scoring 2 runs on an error in the 1st inning, and staging another 5-run inning in the 6th, highlighted by a 2-RBI double from Rhys Hoskins. The Phillies won the game 7-1 and took the series win.

The Phillies improve to 19-14, remaining in 1st in the NL East, maintaining a 1.5 game lead over the Braves. They’ll begin a tough series against the Cardinals in St. Louis next.