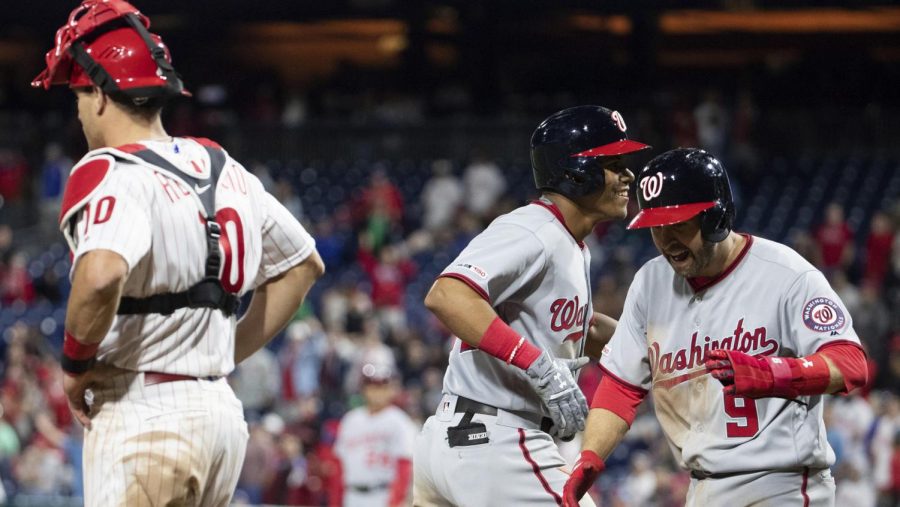 Nationals’ Juan Soto and Brian Dozier score while Phillies’ JT Realmuto looks on, as the Nationals crushed the Phillies 15-1 on Wednesday.

Pivetta And The Phillies Decimated By Washington

Nick Pivetta unfortunately found himself in the middle of the mess on Wednesday night, as he started the game by allowing 3 runs in the 1st inning alone. It took him 39 pitches just to get through the 1st. He seemed to have regained control in the 2nd and 3rd innings, but the wheels officially fell off in the 4th inning, as Pivetta got blasted foe 4 more runs. He finished the game with 7 runs allowed over 3.2 innings, as his ERA skyrockets to 9.54.

The bullpen wasn’t much better, as the pen gave up another 8 runs. One of those runs came off of outfielder Aaron Altherr, who was honestly the best pitcher the Phillies had. His fastball shockingly topped 90, and he struck 2 batters despite allowing a run. That was really the only positive of the night.

The Phillies’ lone run was driven in by Maikel Franco, scoring Rhys Hoskins. The Phillies’ offense only managed 3 hits in the loss.

The Phillies lose the series to Washington, and look to bounce back against the Marlins on Friday.