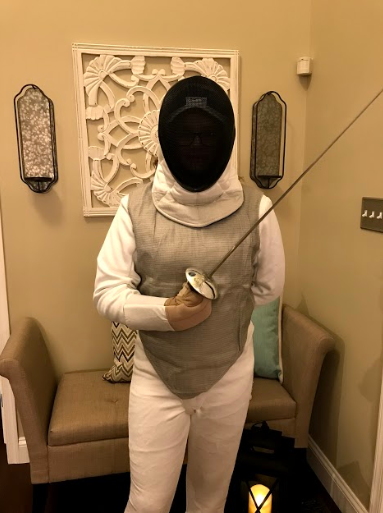 My dad introduced me to [fencing]. He took me to see a class that was going on to see if I was interested. I couldn’t find a sport that I liked until fencing. I like everything about it. I like the actual fighting part; in fact, that’s probably my favorite part about it. I like getting stabbed with the swords the least, though, because it can hurt depending on how hard you get hit. I would like to use fencing in order to get into college. I heard that it looks really good on a college resume, and considering I like the sport so much I do plan on continuing it for a while. My goal is to become a vet, to do very well in school, and to eventually compete in fencing competitions. However, now I’ve been told this by my parents, that it is pretty hard to get into a veterinary school in the U.S. with all the competition of trying to get in, so I’ve been told that I probably need to study abroad to be able to go into vet school. I believe everyone should live by the motto, “Do or do not. There is no try” [Yoda, Star Wars].