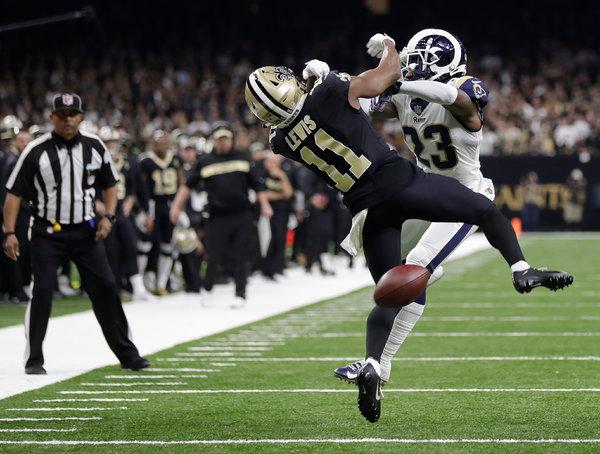 Greg Zuerlein hit a 57-yard field goal with 11:47 left in overtime as the LA Rams advanced to Super Bowl 53 with a 26-23 overtime win over the New Orleans Saints at the Superdome Sunday night.

Moments before making the longest field goal in Rams playoff history, Zuerlein nailed a 45-yard field goal with 19 seconds left to send the game into overtime. But New Orleans fans will argue that the game should never have come to that point after the officials appeared to miss a key pass interference call against Nickell Robey-Coleman.

New Orleans appeared to have control of the game after Drew Brees hit Ted Ginn with a 43-yard pass that put the ball at the Rams 13-yard line with two minutes to play. But an incompletion and a run for no gain left the Saints with a third down and 10. Brees lofted a pass into the right flat for Tommylee Lewis, who was leveled by Robey-Coleman before the ball reached him. A pass interference penalty would have given the Saints a first down and the ability to run the clock down so that any field goal attempt would likely have been the final play of the game.

As it happened, Wil Lutz hit a 31-yard field goal with 1:41 remaining to give the Saints a 23-20 lead, but that was enough time for Jared Goff to drive the Rams 45 yards in nine plays to set up Zuerlein’s game-tying heroics.

“It’s unbelievable, man. I can’t put it into words,” Goff said. “The defense played the way they did to force it to overtime. The defense gets a pick and Greg makes a 57-yarder to win it. That was good from about 70. Unbelievable.”

New Orleans got the ball first in overtime but their opportunity ended after three plays when Brees lofted the ball up under pressure, only to see it come down in the arms of John Johnson III at the Los Angeles 46. Johnson hopped up and celebrated by doing with the “Choppa Style” dance popularized by New Orleans rapper Choppa, whose namesake song had become a Saints’ rallying cry.

The Rams were only able to gain 15 yards, but that was just enough room for Zuerlein to send the franchise to its first Super Bowl since the 2001 season, when they were the St. Louis Rams.

The Superdome was a lot louder earlier in the game when the Saints scored two field goals and a touchdown on their first three possessions to take a 13-0 lead. The Rams chipped away at the deficit beginning early in the second quarter when head coach Sean McVay called a fake punt on fourth and five from the Los Angeles 30. Punter John Hekker did his best Goff impersonation, hitting cornerback Sam Shields for a gain of 12 yards.

Zuerlein made a 36-yard field goal to cut the Saints lead to 13-3. Goff then took the Rams 81 yards in seven plays just before halftime before Todd Gurley crashed over the goal line from six yards out to make the score 13-10 New Orleans at intermission.

The Saints appeared to have rediscovered their offensive rhythm on their first possession of the second half. Marching 71 yards in 12 plays, they took a 20-10 lead when Brees found Taysom Hill on a quick pass from two yards out. But the Rams responded quickly, as Goff drove Los Angeles 75 yards in 10 plays before capping the drive with a one-yard touchdown pass to Tyler Higbee.

After that, the offenses went quiet in a reversal of the regular season meeting between these two teams, which ended 45-35 to the Saints. But with 11 minutes to play, Goff and the Rams offense got back in gear. Starting at their own 9-yard line, Los Angeles marched to the New Orleans 1-yard line before McVay opted to attempt a game-tying field goal rather than go for the go-ahead touchdown. The 24-yard field goal was no trouble for Zuerlein and a dramatic finish was in order.

The Saints suffered their first home playoff loss with Sean Payton as their head coach and Brees as their quarterback. The Rams became the first road team to win a conference championship game since the Baltimore Ravens and San Francisco 49ers turned the trick following the 2012 season.