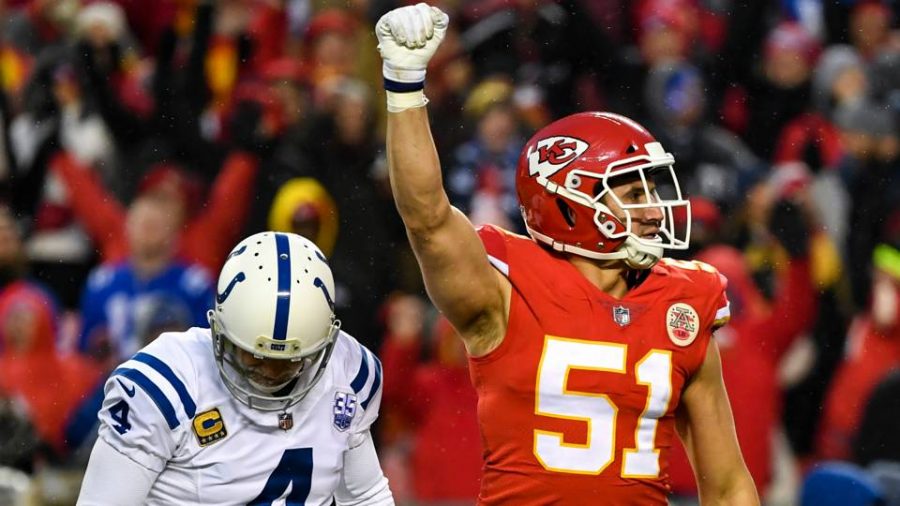 Chiefs’ LB Frank Zombo celebrates as the Chiefs defeated the Colts to move on to the AFC Championship.

The Kansas City Chiefs finally shed their legacy of first-round eliminations with a dominating win over the Indianapolis Colts on Saturday to advance to the AFC Championship.

The Chiefs’ offense was as-advertised in the Divisional Round, coming off a bye week, as the Chiefs jumped out to a 14-0 lead in the 1st quarter on TDs from Damien Williams and Tyreek Hill. The Colts couldn’t get anything started in the 1st against the Chiefs, despite the Chiefs being noted as one of the worst defenses in football, largely ignored thanks to their potent offense.

The Colts finally got on the board with a blocked punt return for a TD by Zach Pascal, making it a 17-7 game. Chiefs’ QB Patrick Mahomes countered with a rushing TD to the pylon, making it a 24-7 halftime lead for Kansas City.

After a scoreless 3rd quarter for both teams, the Colts opened the 4th with a TD to T.Y. Hilton, but the Chiefs countered with a Darrel Williams’ TD, sealing the game and ending the Colts’ season early. The Colts go home, while the Chiefs look to next week as they aim to dethrone the Patriots in the AFC Championship game.