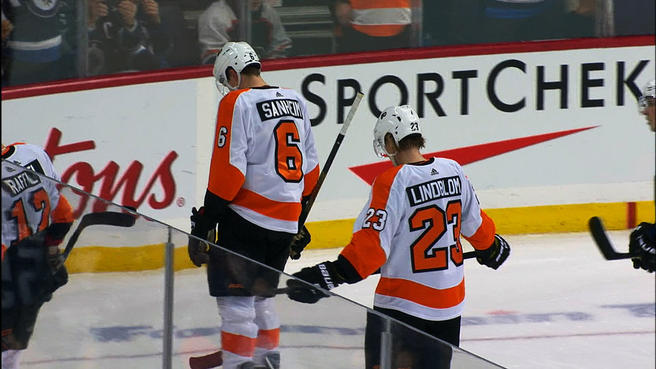 Travis Sanheim and Oskar Lindblom share similar frustration as the Flyers fell 7-1 in Winnipeg on Sunday.

The Flyers began a road trip in Buffalo with a game against the Sabres, who’ve been surprisingly good this season. Buffalo jumped out to  2-0 lead early, and it looked like it would be another pathetic loss for the Flyers. But the Flyers found a spark and took advantage of it, rattling off 6 consecutive goals to stun the Sabres in the comeback effort.Whether or no the Flyers had gotten their mojo back would be determined the next day as the Flyers had to play 10 hours later in Winnipeg. Then the wheels fell off. Badly. Michal Neuvirth looked awful in goal as he allowed 3 goals on only 10 shot attempts. After a strong 6-2 win in Buffalo on Saturday, the Flyers once again failed to capitalize on any momentum by immediately being crushed 7-1 on Sunday.