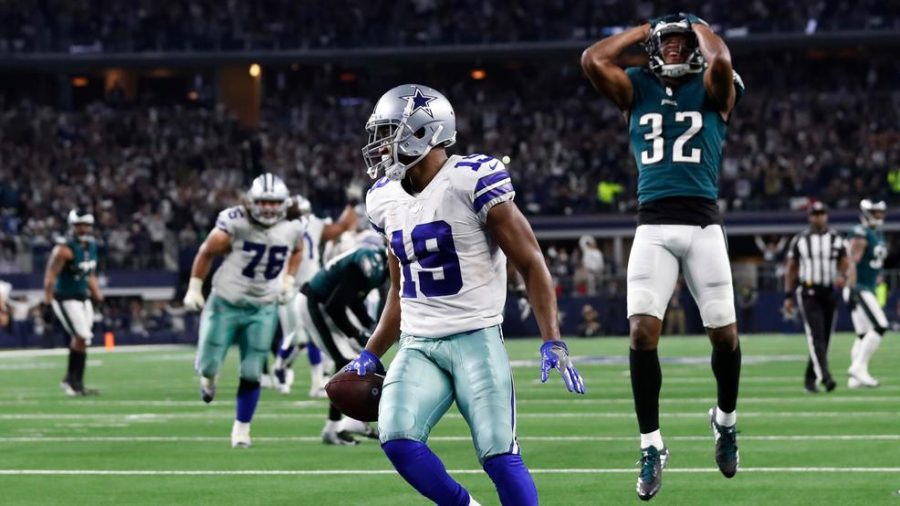 Cowboys Top Eagles in OT, Amari Cooper Shows His Worth

The Eagles vs. Cowboys games have been legendary through the years, but this Sunday’s game had high playoff implications meaning the Cowboys could run away with the division with a win, but the Eagles could took take a step closer to being back-to-back NFC East Champions.

On the opening kickoff, the Eagles immediately forced a fumble and recovered in putting them in the redzone within the first ten seconds of the game. Although everyone in AT&T Stadium saw on the large, highly expensive and over-sized big screen, the officials in New York working with the officials in Dallas didn’t see it resulting in the obvious turn over being overturned with the Cowboys getting a huge break to start the game.

Both offenses produced little to nothing for most of the game as it was 9-6 entering the 4th quarter. The Eagles missed their extra point, which essentially was a huge point by the end of the game. There were turnovers by both teams as the Cowboys recovered a strip sack, and the Eagles defense added 2 interceptions and a fumble recovery.

Entering the 4th quarter down by 3, the Eagles looked to take the lead, but then got slowed up and ended up adding a field goal to tie the game at 9.

Halfway through the 4th, the Cowboys lit the spark a with a touchdown pass to Amari Cooper to give Dallas a 16-9 lead with 7:45 left in the quarter. The Eagles then added their own touchdown to backup tight end Dallas Goedert with 3:12 left in regulation tying the game at 16 with just over three minutes left on the clock.

One snap into the Cowboys drive, Amari Cooper adds another TD, plus 75 more yards to his clutch performance making it 23-16. The Cowboys looked like they sucked the life out of the Eagles, but with time on the clock, Philadelphia went to work.

The Eagles added their own 75 yard touchdown to Dallas Goedert just for it to be washed away because of a pass interference call that was highly questionable. After the touchdown was overturned, the Eagles held their own against the white and black stripes as Carson Wentz threw an absolute dot to Nelson Agholor putting the Eagles at the 6 yard line, setting Darren Sproles up for his hard-fought touchdown run making it 23-23.

The Cowboys were the last team with the ball with just over a minute left after the Eagles score. Dallas marched their way to the 41 yard line just to end regulation with two sacks from Malcolm Jenkins and Fletcher Cox sending the divisional gridiron to overtime.

With the Eagles losing the coin toss, the Cowboys took the ball with no hesitation. The Eagles had a chance to stop the Cowboys on a 3rd and 9 but couldn’t contain Cooper as he picked up the first down. After the conversion, the Cowboys found themselves at 4th and 1 with a decision to go for it instead of adding the field goal. They converted and the game was in their hands at the 18 yard line

Cooper then continued to secure the Cowboys playoff bid with a 15 yard, miracle touchdown as the Eagles defender popped the pass up just for Cooper to snatch it in to end the game.

With this Cowboys win, they find themselves at 8-5 atop the NFC East with the division in their own hands as the Eagles drop to 6-7 on the season and look to fight for a wildcard spot moving forward.