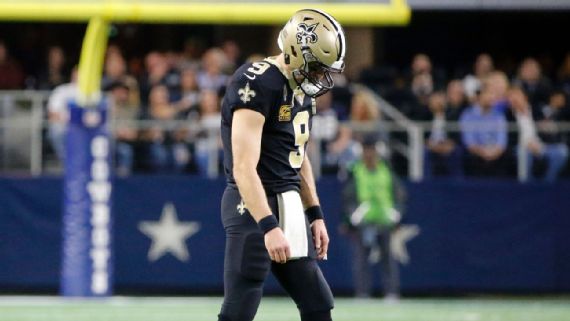 Saints’ QB Drew Brees retreats to the sideline as the Cowboys snap the Saints’ win streak at 10.

The matchup between the New Orleans Saints and the Dallas Cowboys was anticipated to be a solid contest between 2 strong NFC contenders, but there was little faith in the Cowboys defeating the Saints. New Orleans had won 1o straight and averaged 44 points through the last 4 weeks. The job the Dallas defense did  in response to the underdog status, was shocking. Drew Brees looked average at best, and didn’t get a ton of help from his receivers either, going 18/28 in receptions, with 2 sacks and 1 crucial interception with the chance to take the lead late. His 127 passing yards are the 2nd fewest he’s thrown in a full game in 13 years. The one TD drive the Saints even managed, came only because the Cowboys racked up 41 yards in flags on the drive.  The Cowboys’ offensive duo of Dak Prescott and Ezekiel Elliot, however, were on their game under the spotlight. Prescott went 24/28 in receptions for 248 yards and a TD. Elliot saw much of the workload with 23 carries for 76 crucial rushing yards, as well as a TD reception. The Cowboys’ 13-10 upset drastically affects the NFC playoff picture going  forward, and the Cowboys have now solidified themselves as worthy opponents and likely the NFC East champs