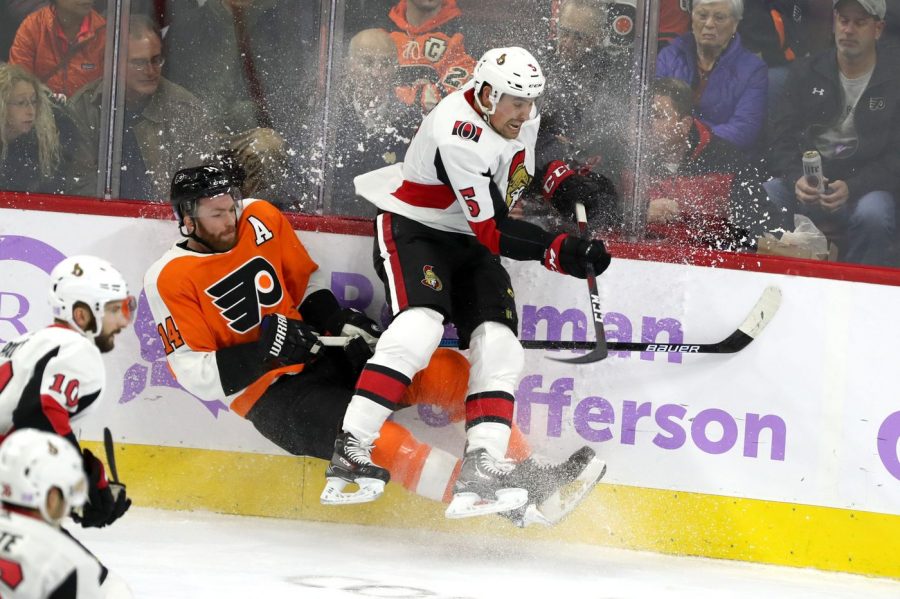 Ottawa Senators’ Cody Ceci slams Flyers’ Sean Couturier into the boards as the Senators defeated the Flyers 4-3 on Tuesday night.

Flyers’ Crushing Loss to Ottawa an Omen of Uncertain Future

Just a day after the organization fired general manager Ron Hextall, head coach Dave Hakstol and many players expressed a new urgency to respond with a win on the ice against the Ottawa Senators. As captain Claude Giroux felt, “Nobody is safe,” as the Flyers organization is in desperate need for a change in the right direction. The Flyers seemed to be on the way to solidifying a statement-win early on in the game against the Senators on Tuesday night, jumping out to a 3-1 lead by the end of the 2nd period. However, the wheels fell off fast, as the Flyers allowed 3 unanswered goals in the 3rd and fell 4-3, their 12th regulation loss of the season, leading to a record of 10-12-2. The unbelievable loss seemed to embody the state of the team, as they “played scared” in the 3rd period. There’s no excuse for such an awful loss, and clearly another big move is inevitable in the coming weeks, if not days. Flyers’ Jakub Voracek, when asked what happened in the Flyers’ collapse, reflected total bewilderment, “I don’t know what happened. I can’t believe we lost that game.” The Flyers are likely facing an ugly and inevitable truth: their window has shut, and a complete reset of the team is in order for the next handful of years. It was fun while it lasted, Philly. Gritty deserves better.